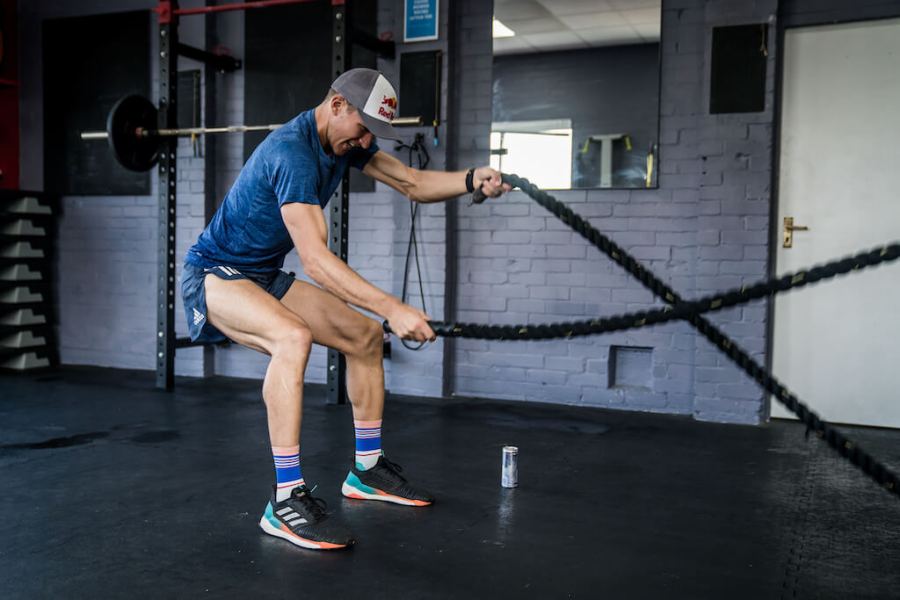 Tom Evans isn’t like other runners. While many endurance athletes swerve the gym, the world-beating British ultra runner pumps out heavy squats and deadlifts.

Some runners stubbornly cling to old-school training ideas, but Evans sharpens his running gait with the help of biomechanical sensors and 3D motion capture analysis.

And although most runners follow a single-sport training programme, Evans boosts his volume by cross-training with mountain biking, road cycling and swimming.

The 30-year-old is a pioneer and an innovator, locked in a deeply personal quest to stretch his physical limits to the max. And his refreshingly open-minded approach is a winning strategy that every runner can learn from.

Evans’ journey to the top of the ultra running scene has been dizzyingly fast. Before he became an elite runner, he served as a British Army Captain in the Welsh Guards, where he learned about discipline, planning and self-control. Then one night in the pub, his friends were boasting about their performances in the Marathon des Sables (MdS) – the notoriously gruelling 250km race across the Sahara Desert.

Eager to shut them up, Evans made a drunken bet that he could beat their times. When he eventually took part in the MDS in 2017, he didn’t just beat his friends’ times: he finished third overall – the best result any European had ever achieved.

Evans then left the Army to embark on a new mission: to see how far his running talent could take him. Fusing old-school military grit with a passion for cutting-edge training innovations, he thrived.

In 2018, he won the 101km Courmayeur-Champex-Chamonix (CCC) race around Mont-Blanc, and broke course records in the Coastal Challenge Costa Rica and South Downs Way 50.

In 2019, he set the fastest time by an overseas athlete at the prestigious Western States 100 race in California. And in 2020 he set a new course record at the 100km Tarawera Ultramarathon in New Zealand.

After a spell focusing on shorter track and road events in a bid to qualify for the Olympic marathon in 2021, he had to undergo knee surgery in 2021. But as he makes his comeback in 2022, he is determined to pursue a life of innovation, self-discovery and adventure.

“I think the main challenge is to do things that nobody has done before,” explains Evans, who lives in Loughborough with his fiancée, the triathlete Sophie Coldwell, their two dogs and… a flock of rescue chickens.

“I’ve now competed for Great Britain at trail, mountain, cross-country and road. And I just think having that versatility, there’s never been anything really like it. Trail is where my heart is. But I want to be able to draw on bits from the road, cross-country, mountains and track to create the sweet spot where I can perform at my best.

Evans’ success in mixing up his distances and disciplines proves that by broadening your training horizons you can become a much more complete athlete. “The race experience of ultra running really helps mentally in the shorter distances, because I put myself in dark places in these long races,” he says. “But the shorter distances have helped my overall speed, and that crosses over onto the trails quite nicely.”

This open-minded approach has led him into the world of sports science. As a Red Bull-sponsored athlete, he recently visited the high-tech Red Bull Athlete Performance Centre (APC) in Austria, where he underwent lung function screening, lactate threshold analysis, force plate tests and motion capture analysis. While not every gadget is available to everyday runners, the take-home lesson from Evans is that you should address every detail of your performance, in any way you can.

“It aligns with my principle of leaving no stone unturned,” he says. “I am a good runner, but I’m not a good all-round athlete. What we are doing is trying to make me a complete athlete. There are areas that I have neglected because I got into this sport late, having been in the Army. So I am now breaking down my running as a movement and strengthening the individual parts. I have been running inside and doing video analysis.

“When I’m running outside, my strength instructor is on a bike with a GoPro to make sure that my gait is right. And I’ve done 3D motion capture analysis of my running, so I have found areas where we can get a 5% or even 1% gain.”

Simple but effective video gait analysis is available to amateur runners for free at stores like Runners Need. And a skilled coach can visually identify weaknesses or imbalances in your running form. But the secret is to keep refining all the details of your performance.

“It’s exactly the same with running. For example, what if I could increase my stride length by 2cm? It doesn’t sound much, but over 100 miles, at 170 steps a minute, you’re getting about three and a half metres for free, every minute. Times that by 15 hours, over the course of an ultra race, and that’s an awful lot.”

Evans knows that science can make you faster. But his openness to new technology doesn’t mean he is in thrall to every new gadget.

“You have to keep asking yourself the question: ‘so what?’” he says. “I tried the new Supersapiens glucose sensor recently, but when I’m exercising I’m not in the ‘glucose performance zone’.

“One of my strengths is my metabolic rate. I can run fast and not use much carbohydrate as fuel. I do a lot of fasted training just to get my body used to working efficiently. I have an almost unlimited amount of fat to fuel my exercise. And the quicker you can run, without using carbohydrate, the better.

“So according to Supersapiens, my performance score is very low, because I don’t use much glucose. But for an ultra runner, that is exactly what you want. The human element is still important.”

A vital part of Evans’ innovative training programme is his powerful gym regime. Research in the British Journal of Sports Medicine found that strength training can improve a runner’s speed, oxygen consumption and running economy by 2-8% – enough to shave a minute or two off your 10k race time.

“I would normally do two strength sessions a week, with some core at the end (see box),” explains Evans, who centres his strength training around lower-body staples like squats and deadlifts. “Strength training allows me to recruit more muscle fibres, so I can perform at your best. It’s also training to be more robust and move more efficiently.”

The secret for runners is to focus on lifting form and speed, not volume.

“Because running is endurance based, people think you need to do loads of reps in the gym,” says Evans, “but if you take 180 steps a minute, that’s 180 reps in just one minute of running, so I do enough high reps when I’m on the run.

“By contrast, in the gym I mix it up by doing heavy weights and low reps. A standard rep range might be 4 x 6 reps, but heavy. If I went all out, I could probably lift the weights for 8 or 9 reps. So I lift maybe 80% of what you could do for normal reps and sets.”

Evans also enjoys the diverse benefits of cross-training with road cycling, mountain biking and swimming. A paper in the European Journal of Applied Physiology and Occupational Physiology found that cross-training improves running performance, while a study in Sports Medicine found it can reduce the risk of overtraining.

“There’s just so much transferable skill,” explains Evans. “Road cycling builds aerobic capacity, but with a reduced load and impact on my legs. And when I’m mountain biking, I’m trying to keep your body straight, just like when running on trails.

“If I’m running downhill, I want my shoulders and chest to be going downhill, even if my legs might be all over the place. Mountain biking helps me to replicate that and get that muscle memory. I don’t get why more runners don’t do it.”

Evans’ willingness to think differently also shapes his performance goals. As he powers into 2022, he is not motivated by medals or money, but by the chance to pursue life-changing adventures. It’s a philosophy every runner can be inspired by.

“I want to do something spectacular on the trails, rather than something good on the road or the track,” he explains. “I just want to be the best all-round trail and ultra runner that I can be. I like FKTs (fastest known times) and challenges that people don’t think are possible.

“So I have started some basic planning for the fastest solo [run] to the North Pole. To do that, and put a climate change awareness theme onto it, is going to mean more to me than running 2:10 at the Berlin Marathon.”

Toughen up for the trail

“These really teach your body to stabilise,” says Evans. “You gain rock-solid stability in your hips. And they help to recruit more muscle fibres when you’re going uphill.”

Loaded calf raises will help you to power up steep climbs and control your balance on descents. “You can do them in a squat rack to add the extra weight,” says Evans.

The single-leg element makes this deadlift variant a much more functional exercise for runners. “It really trains your posterior chain and your balance,” says Evans.

These strengthen the obliques, which are key for runners. “With trail running, you are always changing direction, so your side muscles need to be strong,” says Evans.