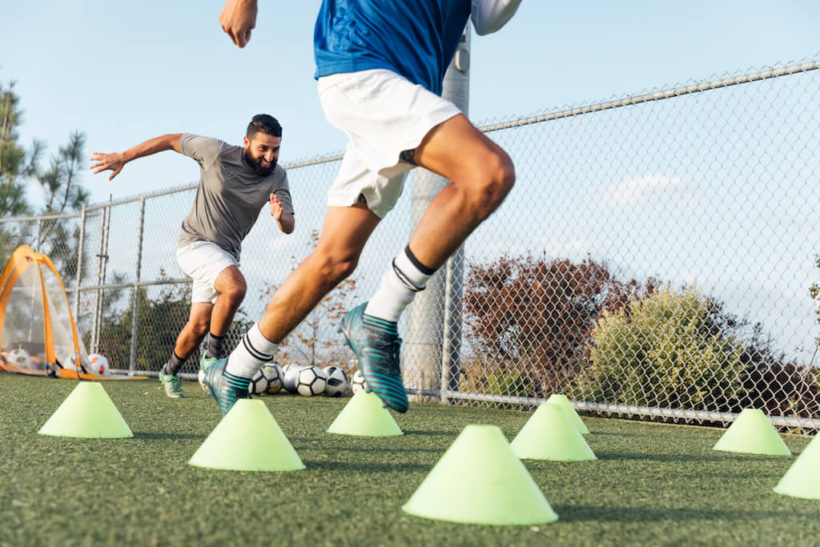 The relentless nature of modern football requires a high-level nutrition plan to match. A professional footballer typically runs 10km during a 90-minute match, covers 600m at maximum sprint speed, and sustains an exercise intensity of 85% of their maximum heart rate throughout the game.

This uniquely intense physical strain results in a huge calorie burn of over 1,600 calories per match. It also has a knock-on effect on players’ body compositions – elite male players tend to have a trim body-fat percentage of 7–15% – and recovery: playing a 90-minute match causes leg muscle glycogen to plummet to 10–40% of its pre-match levels.

In his new book, Nutrition for Top Performance in Football: Eat Like the Pros and Take Your Game to the Next Level, professor Mike Gleeson, an expert in football nutrition, explains how elite footballers now use smart nutritional science to improve their energy levels and recovery times.

“Good nutrition may not make a footballer with average talent into a world-class player, but it can improve endurance, delay physical and mental fatigue and speed up recovery,” says professor Gleeson.

The smart nutritional lessons outlined here are valid whether you play Sunday League football, tennis, squash or any other sport which combines stamina with high-intensity sprinting.

Eating like a pro footballer starts with knowing your body’s fuelling requirements. “Your pre-match meal the night before should ideally contain 2–3g of carbs per kg of bodyweight to boost your glycogen (energy) stores,” explains professor Gleeson.

“Getting the right amount of carbs the night before is especially important for amateur athletes playing in midweek matches after work, as they are at risk of insufficient energy intake,” he warns.

“If training midweek, a good breakfast and lunch should also be consumed. Both meals should be high-carb, supplying 1-2g of carbs per kilogram of bodyweight, with 20-40g of protein, and some fat.”

A good breakfast is porridge with banana, berries, jam or honey; or a simple poached egg on toast. And an energising lunch might be salmon with mashed potato and stir-fried vegetables.

Creatine is more commonly associated with gym-goers than footballers, but elite players are now enjoying its recovery-boosting benefits.

“Creatine is used to produce phosphocreatine in the muscle, which is the fastest way the muscle can regenerate ATP (energy),” explains professor Gleeson.

“It’s used in high-intensity exercise like sprinting, but research has shown that if you have high creatine stores in the muscle from a supplement, you’re able to resynthesise that phosphocreatine more quickly. It therefore enables you to perform repeated sprints more effectively. It can also boost the recovery of your muscle glycogen.”

To pre-load your creatine levels, take 2–5g per day for four weeks. Or to boost your glycogen recovery, aim for four doses of 5g creatine in the first 24 hours post-match.

03. Get energised with fruit juice

Simple but highly effective (as long as you’re exercising enough to make it worthwhile), fruit juice is a popular way for elite athletes to pump up their energy stores.

“100% fruit juices supply fructose and glucose – two kinds of energy – and they contain about 10g of carbs per 100ml,” explains professor Gleeson.

“Fructose is a sugar from fruit that will be taken up pretty much exclusively by the liver and turned into glycogen for energy, but it will also give you extra vitamins like vitamin C as well. This is a better way of getting extra carbs, rather than consuming excessive solid foods.”

Another popular supplement with modern Premier League footballers is beta-alanine. It’s present to a small degree in most people’s diets but you can’t get anywhere near enough of it through food alone, which is why footballers take a supplement.

“It’s one component of a ‘dipeptide’, along with an essential amino acid called histidine,” says professor Gleeson.

“Together they form this dipeptide ‘carnosine’, which acts as a buffer in the muscle. It mops up hydrogen ions, so it reduces the acidity – like lactic acid – that contributes to fatigue when you’re doing repeated sprints. So beta-alanine can help players to do repeated sprints during matches.”

Taking 6g of beta-alanine per day over the course of a few weeks increases the muscle content of carnosine by up to 80%.

But to recover more quickly after the game, eat oily fish for your post-match meal. “Oily fish has anti-inflammatory effects, so may reduce muscle soreness after games,” adds professor Gleeson.

“Oily fish includes salmon, sardines, trout and mackerel, but you can also get omega-3 from avocadoes, vegetable oils, nuts and seeds.”