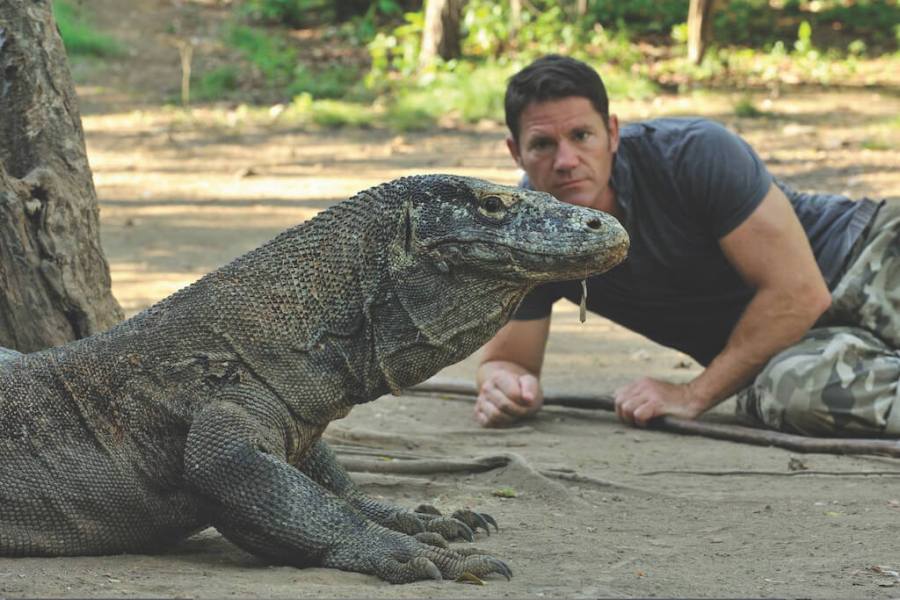 Your kids will recognise him as the face of the BBC’s BAFTA-winning Deadly 60 – in which he tracks down the deadliest animals on the planet in the name of children’s entertainment – and you probably know him from any number of wildlife shows he’s fronted in over two decades as a TV presenter.

But while his work as biologist is beamed across our screens, June 2021 cover star Steve Backshall MBE is also a discoverer of new worlds.

Venturing into parts unknown, his work on the BBC’s Undiscovered Worlds earned him 2020’s Scientific Exploration Society’s Explorer of the Year award, and last year he made a world-first descent of savage white-water rivers in Russia’s Far-East Kamchatka Peninsula.

To go where no one has gone before requires a cast-iron mindset and unwavering commitment to face danger head on, but scaling sheer rock faces and navigating violent rapids is also dependant on a body stable, strong and resilient enough to withstand the full force of nature.

Now 48, Backshall credits calisthenics and a renewed training intensity – coached into him by Wild Training founder James Griffiths – with helping him stay expedition-fit all year round.

“The critical thing for me is making sure my fitness is very malleable and adaptable,” Backshall tells Men’s Fitness.

“Right now, I’m heading out on an exploratory diving expedition. The last one I did was a white-water paddling expedition, and the next one will be climbing, so I need to make sure I can bounce from one activity to the next.

“What I’ve found is, if I can focus a lot on things like calisthenics – which give you really good strength-to-bodyweight ratio, power and flexibility – I’m less likely to get injured and more likely to be able to apply my strength in the real world.”

Men’s Fitness: When did you discover your love for adventure?

Steve Backshall: It’s something I’ve had since I was a kid. I can remember being really disappointed that the golden era of exploration was hundreds of years gone and that would never be my reality. But as I got into my late teens and started travelling on my own, I found that that totally wasn’t true. There are plenty of proper, ground-breaking expeditions yet to be done.

I did my first solo expedition when I was in my early twenties: I tried to walk across New Guinea, and it was a catastrophic failure from start to finish. I was badly organised and ill-prepared. I had no communication with the outside world, and it happened to be during a time of unprecedented drought, with wildfires burning across the island.

So I failed, but I did spend three months in the jungle, learning the hard way about how to do expeditions, and had some extraordinary experiences along the way. That gave me the impetus to crack on with bigger and better-prepared things.

Not long after that, I went and made my own film, in the jungles of Colombia. I ended up selling it to National Geographic, and they took me on as their ‘adventurer in residence’, which remains the best job title I’ve ever had.

Essentially they paid me for the next five years to do similar expeditions – most of them self-filmed – and to turn them into expedition television programmes, and I’ve never looked back.

MF: You’ve been all around the world, but is there one trip that stands out as the most memorable?

SB: I’m very lucky to still be doing these expeditions, and to continue having the opportunities to go places where no human beings have ever been before – in 2021!

It seems incredible that that can be the case, but I’ve just got back from West Africa, making the first ever descent of a jungle river – which very nearly sunk all my crew. We were with local people who were wide-eyed throughout the entire journey, because neither they, nor their ancestors had ever made that journey before. Being able to see an environment with completely fresh eyes is something very, very special.

If I had to pick one expedition that really stands out, a white-water first-descent that I did in Kamchatka, Russia, in 2020, would be right at the top of the list of best ever expeditions.

We found a river that has never been paddled before – it’s Class V white water – and we ran it with a team of incredibly strong paddlers. It was just mesmerising, and the sensation of being able to say, “This is completely new; no one has ever seen this landscape from this vantage point before” is awesome.

MF: In Undiscovered Worlds, you go cave diving in deepest Mexico – how does it feel to descend into an environment no one has been before?

If you go to a completely new location – like we were in the Yucatán Peninsula – you’re shining lights on things that have never been seen before by human eyes. They are stunningly beautiful, these caves. They’re magnificently decorated with stalagmites and stalagtites, and some of them even have the remains of ancient, stone-aged animals inside them: mastodons, cave bears and long-extinct mammoths. It is breathtaking.

MF: The stuff we see on TV is the result of serious planning and hard work – can you give a sense of some of the unique demands of the job?

SB: Cave diving is one of the most logistically challenging types of expedition. Just to get to the mouth of a cave system, there could be several days of hiking through a rainforest. But you’re not just hiking: you’re carrying all your cylinders, your wetsuits and your dive cameras and all these things.

Then inevitably you need to abseil down to the entrance, and just doing that in all your dive gear is pretty full on. If you do it right, you can make it pretty safe, but because you’re way out there in the middle of nowhere, anything that goes wrong is going to have catastrophic consequences.

You have to be 100% self-reliant – nobody else is coming to save you – and even the smallest mistake, like running out of light or kicking up bad visibility, is probably going to kill you. That is a degree of commitment that I think we are unfamiliar with in ‘normal’ life.

MF: Are you ever fearful in those situations?

SB: Definitely, and fear is very useful. Fear is something you need to have: it stops you from making stupid decisions. But it does need to be kept under control. The way I do it is through breathing techniques and focusing on simple tasks.

The only time I’ve truly panicked was cave diving, when I was waiting in a chamber with a dive woman called Katie, and we were there for about half an hour just lying on the bottom. After a while we ran out of small things to check and monitor, and you end up thinking, Woah, hang on, we’re a kilometre underground in a cave no-one has been before, with the ceiling direct above my head.

Your heart rate goes up and your blood starts pumping – and that’s bad, because you use up more oxygen – so you just have to distract your mind as best as possible.

MF: Moving onto fitness, how do you stay in expedition-ready shape all year round?

SB: The critical thing for me is making sure my fitness is very malleable and adaptable. Right now, I’m heading out on an exploratory diving expedition. The last one I did was a white-water paddling expedition, and the next one will be climbing, so I need to make sure I can bounce from one activity to the next.

What I’ve found is, if I can focus a lot on things like calisthenics – which gives you really good strength-to-bodyweight ratio, power and flexibility – I’m less likely to get injured and more likely to be able to apply my strength in the real world.

It’s really important to keep up the cardiovascular fitness, and my go-to bit of kit in the gym is the Olympic rings. They’re all about grip strength and hauling your own bodyweight around – which is what it’s like when you’re rock climbing, or paddling, or simply carrying big loads. That kind of functional strength is just so valuable.

MF: How do you stay in shape when you’re away from the gym?

SB: There are two things I always take with me: suspension straps and a skipping rope. Used right, the straps can replicate everything I need, and the rope provides a really good, high-intensity cardiovascular workout in ten or 15 minutes.

MF: Finally, have you ever been put in serious danger by any of the animals you’ve filmed with?

SB: One incident springs to mind. We were swimming with crocodiles in the Okavango Delta [Botswana], which is already fairly dangerous, but it was made worse when we swam face first into a hippo.

I think, retrospectively, you could have flipped a coin as to whether we lived or were killed in that situation. It was pure chance that the animal was so surprised by seeing us there that it gave us the time we needed to bolt out and get to the surface – otherwise we were history.

A world-roaming father-of-three like Backshall can’t afford to be scrolling through Twitter in five-minute rests between sets. Intensity is the name of the game.

“It can be really hard to find the time,” he says. “But if you train smart, you can get something significant out of a 15-minute session. If that’s all you’ve got, you just need to make sure you do everything to failure and really max out.”

If you often get to your end-of-day workout fatigued and in no mood to push yourself, Backshall says to heed the advice of his wife, double-Olympic rowing gold medalist Helen Glover:

“If Helen is training, as soon as she gets up in the morning she spikes her testosterone by doing something intense – something that makes you grit your teeth – for five or ten minutes. After that, the rest of the day is a breeze.

“My go-to is hitting the bag. I’ll wake up, go nuts on the punchbag for a few minutes, then my adrenaline and testosterone are up and I’m ready to go for the rest of the day.”