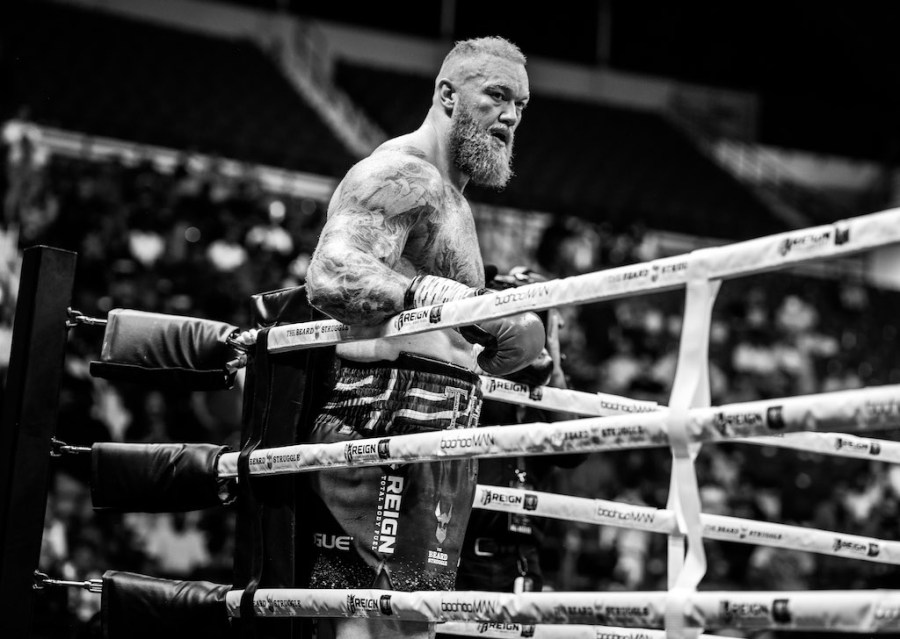 Prior to his recent boxing victory over another former World’s Strongest Man, Eddie Hall, Icelandic giant Hafþór ‘Thor’ Björnsson sat down with MF to talk training, fighting and transforming his physique…

Hafþór Björnsson never trained any strongman movements before his first competition in 2009. As a 6ft 7”, lanky teenager, he had always been focused on his dream of becoming a pro basketball player. But when a recurring ankle injury knocked his career off course, he turned to bodybuilding as a way to improve his physique. Ronnie Coleman and Dorian Yates became two of Björnsson’s biggest role models. They trained heavy, which resonated with him.

“Those guys were my inspiration,” he says. “I watched more bodybuilders, to be honest with you, than strongman guys.”

And although ‘looking good’ was his main motivation, the heavy weights soon led Björnsson to powerlifting. It was this pursuit that brought him to former deadlift world-record holder Benedikt Magnússon’s Super Gym in Iceland.

One day, while Björnsson was performing deadlifts in the gym, Magnússon saw him training for the first time. He approached him to suggest competing in a strongman competition – Westfjord Viking – taking place the following day. Björnsson questioned whether he was strong enough, but Magnússon encouraged him, so he called the event’s organiser, Magnús ver Magnússon, at 10pm that night.

Magnússon told him a bus transporting all the participants to the competition ground would be leaving at 4:30am the following morning. If there was a spare seat, he could have it. “I showed up the next morning and there was space, so I went with him,” Björnsson said. “And I never turned away.”

That competition is, to this day, Björnsson’s first memory of strongman. A year later he returned to the Westfjord Viking event to set an Icelandic record that, according to Björnsson, still stands. In the same year, he won Strongest Man in Iceland and Iceland’s Strongest Viking. And those experiences gave him the belief he could make a name for himself in the sport – although he never thought he could one day become the World’s Strongest Man.

“That meant a lot to me, because it was my first ever competition,” he says. “I was the new guy. I was just trying the sport out, giving it a try. And to make that statement, and to break that record, gave me that inspiration to keep going.”

While the physicality came naturally to him, Björnsson struggled to eat the six meals per-day strongmen need to stay, well, strong. It takes a lot of food to reach the 205kg size he once grew to, and the strongman diet allows no days off.

“You don’t become like that by eating three meals a day,” he said. “You have to force feed yourself, grow into a monster and become strong enough to lift those weights. It was tough, man.”

Anyone who watched the HBO series Game of Thrones will know Björnsson is familiar with monster transformations, after winning a role on the show as ‘The Mountain’ in 2013. His contract even stipulated the producers had to provide him with meals every two to three hours on set, and someone would feed him fork-to-mouth between scenes.

Being an actor as well as a strongman was exhausting work. Some fight scenes would take hours to shoot, and Björnsson would have to find local gyms to train in when travelling to Belfast or Spain. At times, he doubted whether it was worth it. His wife since 2018, Kelsey Henson, struggled with his lifestyle, too. He took almost no holidays. But Björnsson recognises this as the price paid to become the best.

In 2018, he received a full return on investment by becoming the first person to have won the Arnold Strongman Classic, Europe’s Strongest Man, and World’s Strongest Man in one year. The last Icelander to win the World’s Strongest Man title had been Ver Magnússon, the man who gave him his first opportunity in the sport. (For good measure, Björnsson also broke an elephant-bar deadlift WR at 472kg in the same year.)

Consuming enough calories to fuel this streak of feats required innovation: he threw dextrose (simple sugar) on his rice before swamping it in chicken stock, ground all his Ribeye steaks to ease digestion, and took between-meal walks to increase his appetite.

But Björnsson had more to give after winning ‘the big three’ in 2018. He raised his Elephant Bar deadlift record to 474kg the following year and defended his title at the Arnold Strongman Classic. But there remained a challenge Björnsson was unable to resist.

British strongman Eddie Hall had broken the deadlift world record in 2016 by pulling half a tonne from the ground. And in 2020, Björnsson decided to go one better. On 2 May 2020 he pulled 501kg, initiating a rivalry that continues to this day.

“For anyone wanting to break that record, it’s going to take them years. That’s just how it is. But first and foremost, you have to believe in yourself,” he says.

Hard work needs to be combined with genetic luck and avoiding injuries, too. And for transparency, the big man confirmed in 2017 that certain performance-enhancing substances had been involved. “When you want to be the best,” he said in the ESPN interview, “you do whatever it takes.” (Björnsson never failed a test during competition.)

After winning every single major title and pulling the deadlift WR, he started looking for a new challenge beyond strongman. He also felt a desire to lead a healthier lifestyle, and to have enough energy to run around with his children – difficult at 205kg.

“I just got to the point where I felt there was nothing more for me to do,” he says. “And in strongman I had won everything there is to win.”

In 2021, he won his debut boxing bout against an arm wrestler called Devon Laratt, having lost over 50kg in preparation for the fight. And on Saturday 19 March this year, Björnsson entered the ring in Dubai with his old strongman rival, Eddie Hall. The long-awaited fight – billed as the ‘heaviest boxing match in history’ went the six-round distance, but the Icelander emerged clear winner, knocking Hall down twice and making full use of his considerable reach advantage.

Boxing training, unsurprisingly, looks very different to his strongman days. Björnsson switched the Atlas stone lifts for burpees, and log presses for press-ups, transitioning to a metabolic conditioning approach. He worked out more, too, and with fewer breaks. Between a set of 5 deadlifts, for instance, he used to rest up to eight minutes. Now he’s only taking one minute of rest between 12-minute circuits.

“A you can see, I’m training a lot differently these days,” he says. “With this method of training, you’re going to burn a lot more calories and you’re going to increase your endurance.”

He now weighs a barely-there 144kg…

These days, a typical circuit for Björnsson will consist of 12 exercises – ball slams, burpees, box jumps, and other functional movements – completed back-to-back.