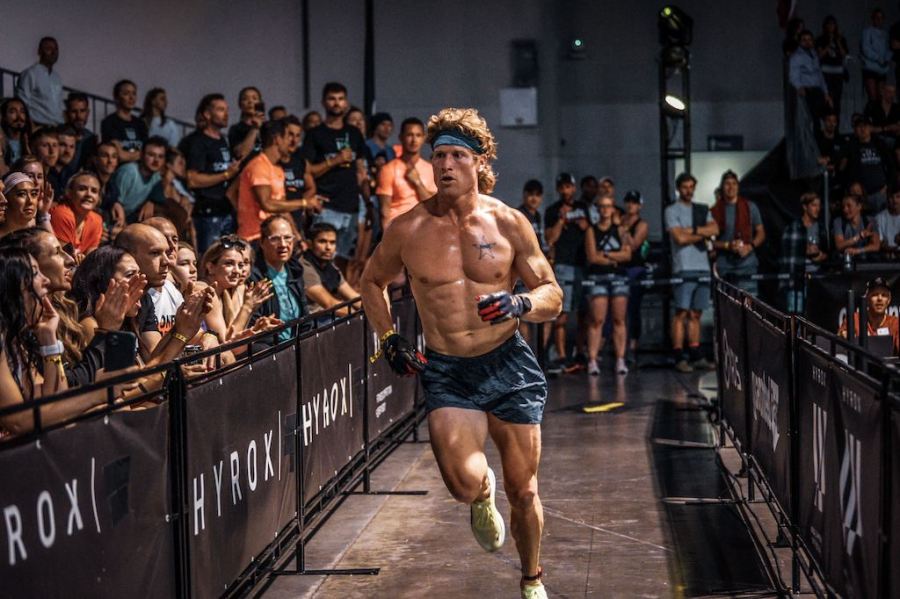 Winner of the Obstacle Course Racing World Championships no less than six times, Hunter McIntyre entered the 2019 CrossFit Games as a wildcard – making it past the first cut and into the top 75.

Though he didn’t test those at the sharp end of the Games, McIntyre can lay claim to a CrossFit world record: completing ‘Murph’ (one-mile run, 100 pull-ups, 200 press-ups, 300 air squats and another one-mile run – with a 20lb weighted vest) in just 34 minutes and 13 seconds.

It’s the upcoming fitness sport of HYROX, however, that McIntyre is currently dominating. With two World Championships to his name (2020 and 2022), he also holds the current world record, completing the 8km of running and eight exercise stations in a ridiculous 55:09.

Men’s Fitness: What’s needed to do well at HYROX?

Hunter McIntyre: It’s a 60:40 test of endurance and strength capacity. If you’re a truly talented runner, you’ll feel your strengths highlighted in this sport. The same goes for if you’re a talented CrossFitter.

But whereas in CrossFit you need to be able to snatch in the high two hundreds (200lbs = 90kg) and be able to do ring muscle-ups to be a competitor, you don’t need that in HYROX.

MF: How long have you been in the relatively new world of fitness racing?

HM: Competitively, for a decade. Now Spartan have their own version of HYROX, called DEKAFIT, and Tough Mudder has its TMX. But the HYROX people have really professionalised it.

They’re taking it to the highest level in terms of the cash prizes, participants, international presence, big sponsors and the TV coverage on ESPN. They’ve honed it and made it a super high-level experience.

Men’s Fitness: You’re a multi-times world champion athlete now, but is it fair to say you had an unconventional start?

HM: I grew up doing all kinds of sports, but I wasn’t uniquely amazing at any.

When I was 22, I dropped out of college. I was modelling for a while and was still much fitter than the other models. They looked good, but when we’d lift weights they didn’t want to go hard.

You need to do that to retain your strength. A decade on, I’m the one on the covers of magazines.

MF: When did you first seriously look at fitness as a means of earning a living?

HM: I ran my first half marathon also when I was around 22. I’d never run over three miles in my entire life, and I won the thing.

I signed up for a Spartan Race and I took sixth place out of like 10,000 people. I didn’t want to work in a store or a wood yard anymore (I did that for six months) – I wanted more of this.

HM: Yeah. Up to that point you either went to the Olympics, or got into professional sports if you were extremely skilled and lucky – or else you stopped competing after college.

Within two years I was part of a TV show where I travelled the world doing the hardest races. It was almost like I tripped into it.

MF: Do you feel you have unfinished business in CrossFit?

HM: I wish I had just made it one workout further, but at the same time I walk away knowing that I was there and it was a happy experience.

The one thing I recognised about CrossFit is it’s so specialised I would let miss out on everything else I enjoy, like the longer distance work.

MF: So, after OCR and now HYROX, where are you going to challenge yourself next?

HM: Well, I haven’t really spoken to anyone else other than my people about this but there’s this Olympic sport called Sprint Canoeing.

From a metrics standpoint, I can see that I have a lot of what’s needed in terms of physical and oxidative power. I’ve done a lot of canoeing and kayaking racing.

I’m not a perfect fit for it, but I can ride a unicycle so that’s the balanced thing sorted!

If I can get in a boat for the next year, is there a chance I can qualify for the Olympics? I really want to try.