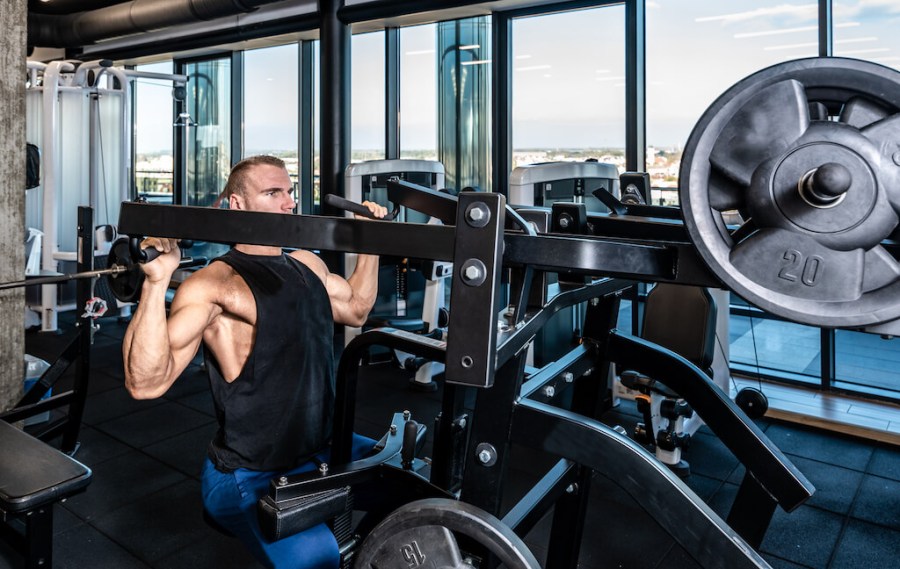 Time has not been kind to resistance machines. Once the cornerstone of commercial gyms, the clank and whir of pin-loaded weight stacks and pulley-wired cable stations provided the backing track to workouts up and down the country. But the likes of the lat pull-down, leg press, cable station and Smith machine have fallen out of favour, as more ‘functional’ forms of fitness have taken their place.

While machines provide resistance through a fixed plane of motion, free weights are now the weapon of choice in CrossFit boxes and studios around the globe.

The pandemic has only compounded their fate, leaving these unfashionable contraptions to gather dust while bodyweight training in living rooms has become de rigueur of the day.

But there’s hope yet… A quick scroll of Instagram shows resistance machines still have their place. Observe the stacked weights room of most high-performance centres, such as England Rugby’s training base at Pennyhill Park.

Long scorned, resistance machines are making a comeback, which begs the question: are you missing a trick by not including them in your weekly workouts? 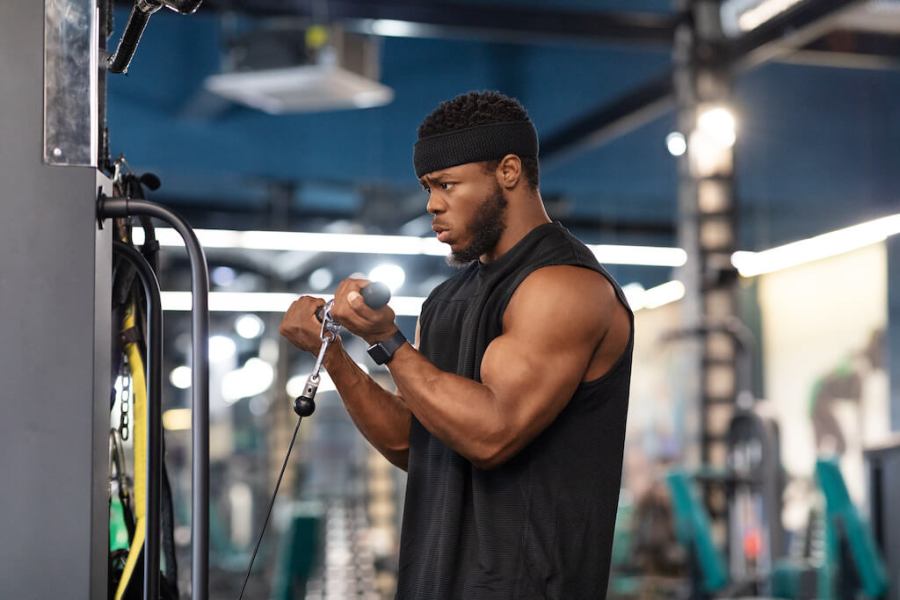 “Because machines require less skill and motor control than free-weight exercises, they’re typically safer and cause fewer accidents and injuries,” he tells MF.

A 14-year study published in Injury Epidemiology backs that up. Of 2,873 injuries recorded at fitness facilities, 53% were related to general free weight activities, and 36% to group exercise classes due to overexertion and unnatural movements.

For experienced gym-goers pushing to failure – like himself, a seasoned veteran of strength training – Mitchell also advocates their use.

“When using machines for high-intensity protocols like rest-pause and drop sets, your muscles are more likely to fail than your technique, which is crucial for shaping a strong, muscular physique.”

The functional fitness crowd would argue, justifiably, that using resistance machines doesn’t build real-world strength like manhandling a barbell. But if your primary goal is hypertrophy, research suggests it’s honours even.

“The reason for that is simple,” says Mitchell. “When you’re lifting weights, your body doesn’t know whether you’re using a machine or free weights.”

He points to numerous studies comparing back squats with the leg press and even the much-derided Smith machine.

RELATED: The Best Resistance Machine Exercises For Every Body Part

“Your body only experiences the resistance an exercise provides and the tension your muscles generate to move the load, which is the primary stimulus for building and developing muscle tissue,” Mitchell adds.

If you’re new to lifting and your goal is hypertrophy, that’s when resistance machines really come into their own. “Most new lifters lack the technique and ability to contract their muscles in a coordinated way, known as neuromuscular efficiency,” Mitchell continues.

Think back to the first time you jumped under a squat rack or got a bit cocky with a dumbbell overhead press. Chances are the weights went anywhere but skywards, as your body buckled under this unfamiliar stimulus. Lacking proficient technique, it’s unlikely you were able to achieve the kind of muscular tension required to trigger muscle growth.

If, instead, you swapped the rack for the hack squat and dumbbells for an incline chest press, you’d probably find it much easier to generate a significant muscle growth response while worrying less about technique.

“In fact, most newbie strength gains stem from becoming more efficient at contracting your muscles, not due to muscle growth,” adds Mitchell. “So if you’re new to weight lifting, machine exercises are a great place to start honing your technique and developing neuromuscular efficiency without overly taxing your central nervous system.” 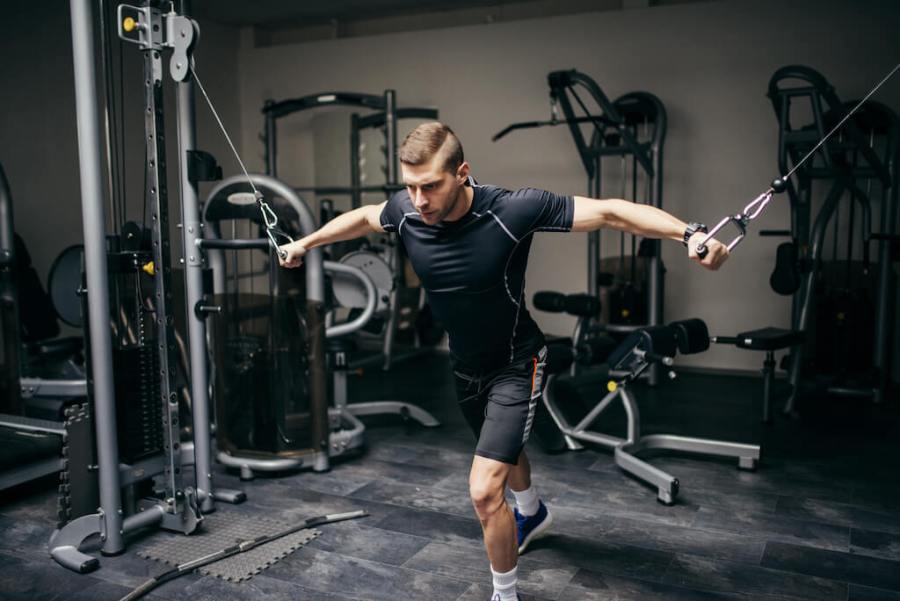 If resistance machines and free weights elicit similar returns in muscle size and mass and you’re proficient with the latter, then why bother with the former? That all depends on an exercise’s unique resistance profile.

“A resistance profile essentially reflects which portion of a lift is most challenging and which is easiest, or in which portion you need to exert the most and least force,” explains Mitchell.

Take the lateral raise, for example. When using dumbbells, the move is hardest at the top, but easiest at the bottom, challenging the medial delts in their shortened range but providing very little stimulus when the muscle is in its lengthened range.

A cable lateral raise, by contrast, is easier at the top of the movement, but there is still a challenge at the bottom of the exercise.

It’s a similar story with biceps and triceps exercises when using dumbbells versus cables, or when performing a squat, given that leg length and ankle mobility can impact how quad or hip-dominant the exercise becomes.

Using a resistance machine allows you to stress your muscles through their entire range of motion.

“That’s important because some machines have resistance profiles that biomechanically match where you’re physically stronger or weaker in a lift, helping develop all portions of a given muscle,” says Mitchell – which will give you a more balanced physique, and could even help break through stubborn training plateaus.

Whether you head for the weights rack or cable station in your next workout, exercise selection ultimately boils down to its cost-to-benefit ratio. Put simply: while two exercises may deliver very similar benefits, they can come with entirely different costs.

Olympic weightlifting in high-performance sport is a prime example. Arguably, becoming proficient in a clean or snatch would deliver considerable gains in power and explosivity on the rugby field, but it also carries significant costs, chiefly a long time-consuming learning curve.

That time, any coach will tell you, would be better served practising the sport itself. 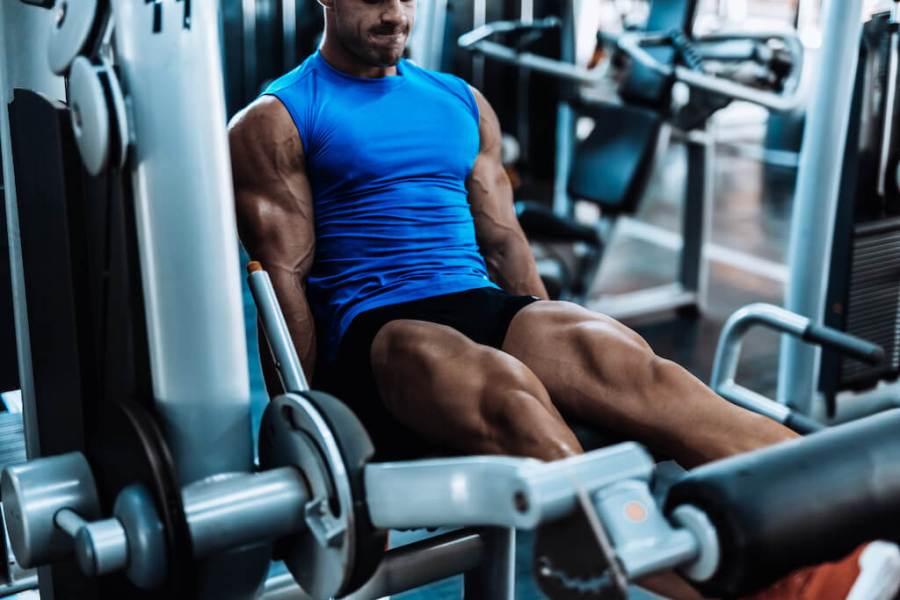 A smart athlete will think in terms of effectiveness and efficiency, or the ‘cost-to-benefit’ ratio of achieving that goal. If your reason for hitting the gym is to boost your Olympic lifts then fill your boots, but if it’s getting stronger or building muscle quickly, resistance machines might be the answer.

“Machines typically demand a lower skill component than free weights,” agrees Mitchell, “which can facilitate rapid proficiency in key movement patterns in a short period. At U.P. this allows us to get clients to a point where they can train close to failure and accumulate higher amounts of training volume, which are two key drivers of hypertrophy.”

For all their benefits, resistance machines still have their limitations.

“Free weights are more practical in almost every situation if you’re training at home with limited space,” says Mitchell, which frankly has been the status quo for the past two years. You can perform a ton of whole-body workouts with just a barbell, dumbbells, a rack, and a bench.

“By contrast, because fixed path machines lock you into a given range of motion and are generally less versatile, you would need multiple machines – or, say, a commercial gym in your garage – to effectively train your whole body,” he adds.

“Nevertheless, there’s always going to be a limit to how many squats, deadlifts or bench presses you can do during a week before you end up overtrained or, worse, in the hospital.”

If hypertrophy is your primary goal, Mitchell continues, using resistance machines alongside free weights means you can target the same muscle group multiple times per week while minimising the risk of overtraining and injury.

“Just remember,” he adds, “exercises are simply tools and exercise selection is an individualised process, considering your injury history, current ability, goal and anatomy. Prioritising free weights over machines or vice versa does a disservice to this process and reduces the options available to you.”

So, before you swap those dumbbells – bought at vast expense mid-lockdown – for a cable station, just think about how you can complement your free weight workouts at home with some resistance machine learning in the gym. Used wisely, even the Smith machine could become foundational in pushing your strength and muscle gains to new heights.