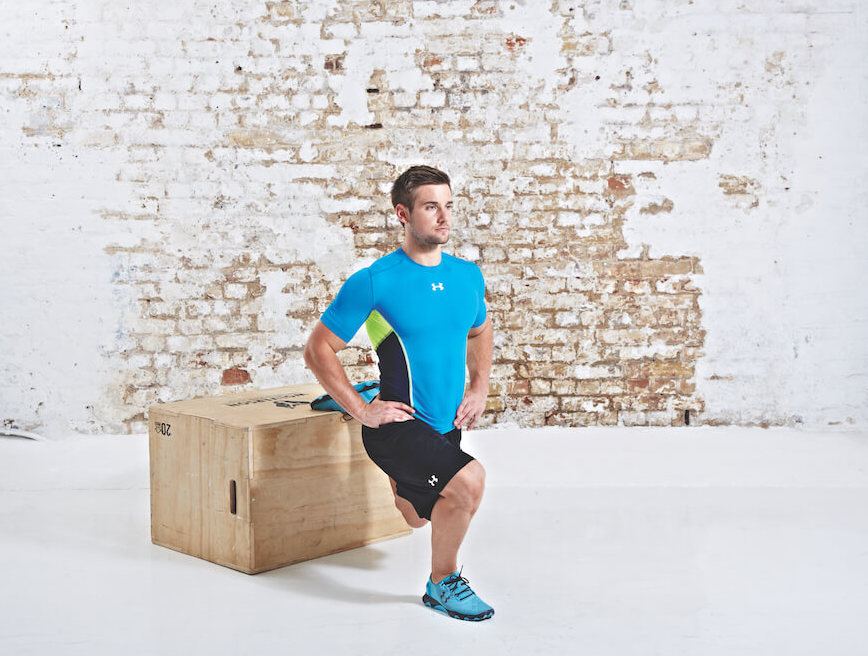 Lifting weights isn’t the only way to build strength and burn fat.

You can get ripped doing moves using only your own bodyweight and, best of all, you can do them virtually anywhere.

Here’s how to do the essential bodyweight moves, with pro tips and the reason why each is so essential to helping you move better, get stronger and be as functionally fit as possible. 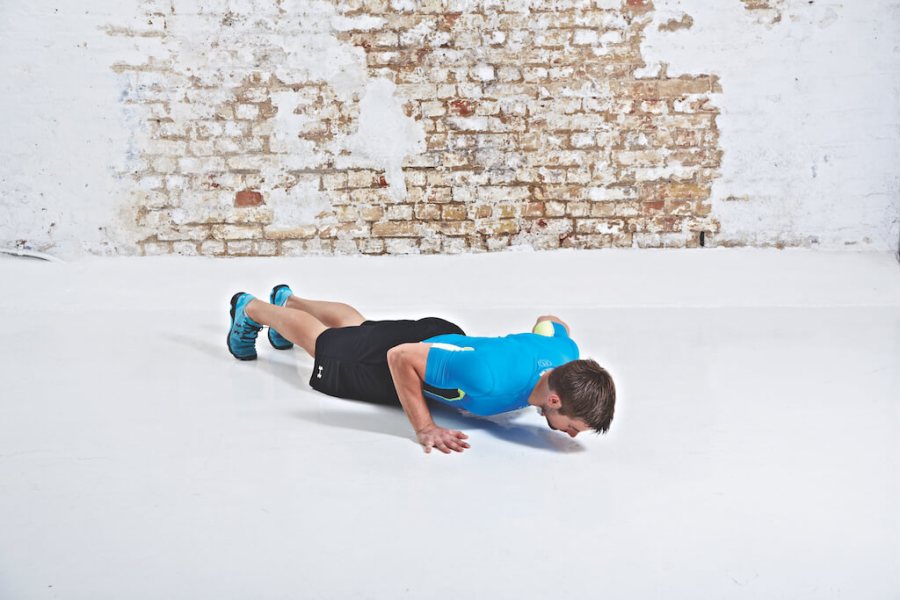 “The basic bodyweight move everyone knows should be an essential part of your exercise arsenal,” says Andy McKenzie, also known as ‘Ironmac’ – one of Britain’s top strength and conditioning coaches.

“Done correctly, the press-up will build your chest and shoulders, while strengthening your core.”

How to do a press-up: 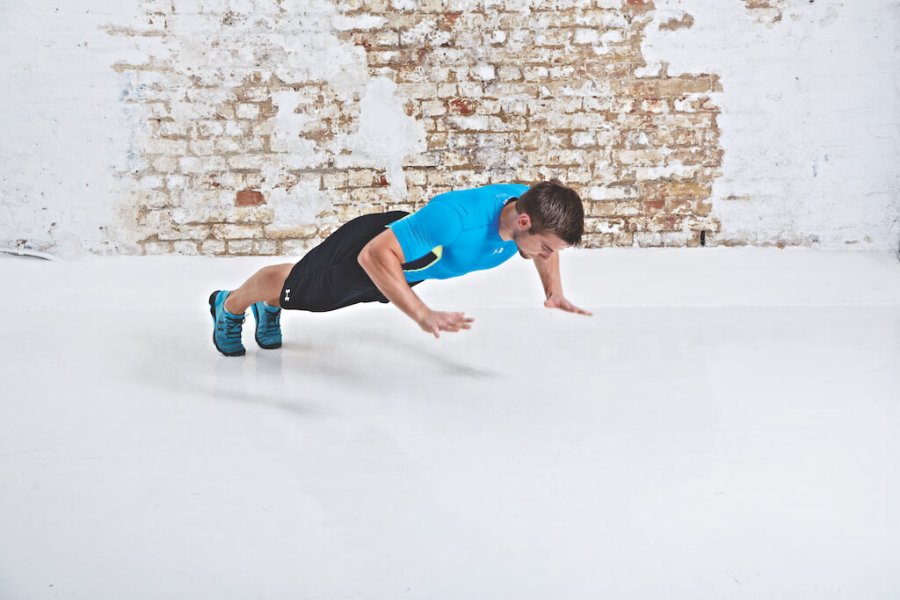 “The split-second strength required to lift yourself off the ground builds your explosive power and turns the press-up into a move that also builds cardio endurance,” says McKenzie.

How to do an explosive press-up:

Pro tip: “To build endurance and develop the fast-twitch muscle fibres needed for the explosive movement, do ten seconds of explosive press-ups with 45 seconds’ rest for as long as you can.” 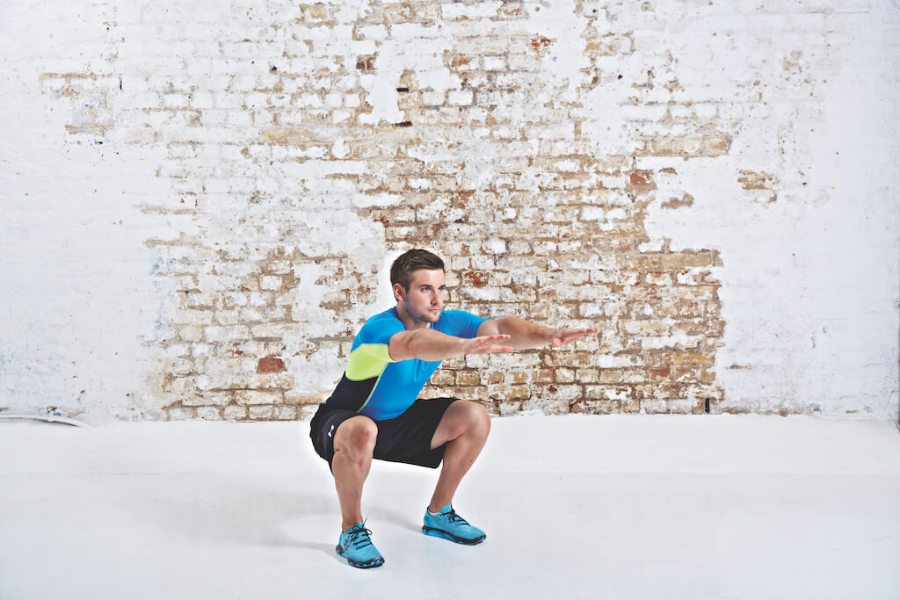 “Deep bending of the knees is vital for good mobility. It’s intrinsic to many real-life movements and should be done on a daily basis,” says McKenzie. “Think of it as flossing for the lower body.”

How to do an air squat:

Pro tip: “Use ‘triangle feet’ to distribute the load,” says McKenzie. “Ensure your big toe, little toe and heel are all in contact with the floor, sharing the pressure evenly between them.” 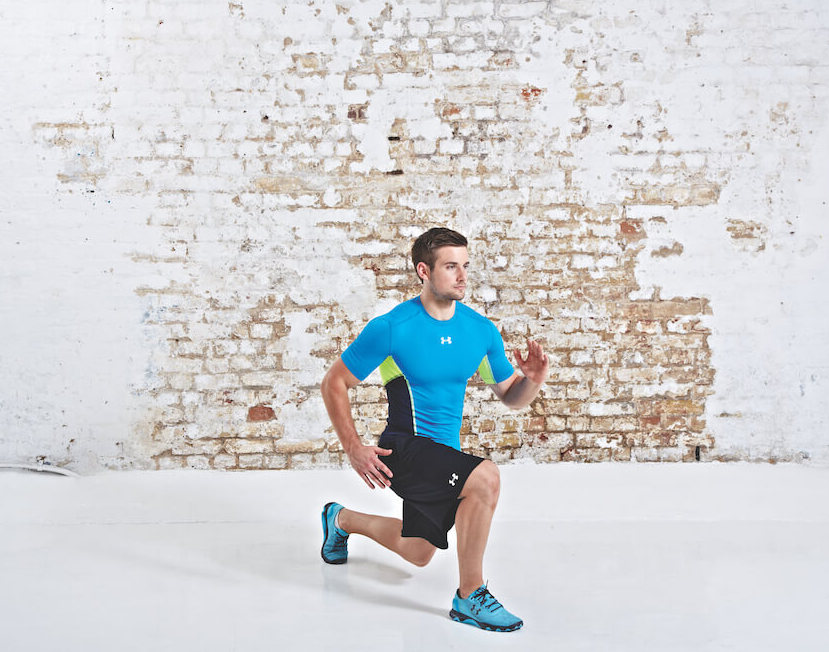 “An effective exercise in itself, the lunge also complements other leg moves to maximise gains in leg strength,” says McKenzie. “It will also improve the flexibility and movement range of your hip flexors to help keep you injury free.”

How to do a lunge:

Pro tip: “If you want to work your glutes even harder and get true buns of steel, do a reverse lunge afterwards by lunging backwards instead of forwards. Focus on dropping your hips back and keeping your weight on the heel of your front leg.” 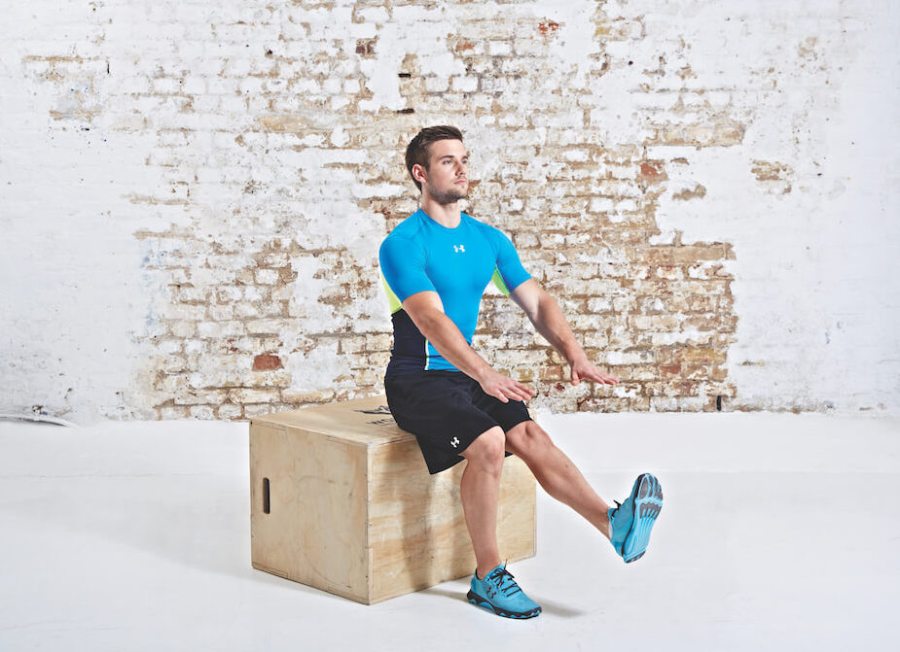 “Making an exercise easier while maintaining the movement pattern is key to progression,” says McKenzie. “Using a box to balance on when you reach the bottom position is a great way to learn how to lower your body under control. Once you’ve got that mastered, take the box away and focus on maintaining balance at the bottom, too.”

How to do a box pistol squat:

Pro tip: “Once you’re comfortable, allow a gap between your bum and the box big enough to slide an envelope through,” says McKenzie. “Once you can do that, start using a slightly lower box. Rinse and repeat.” 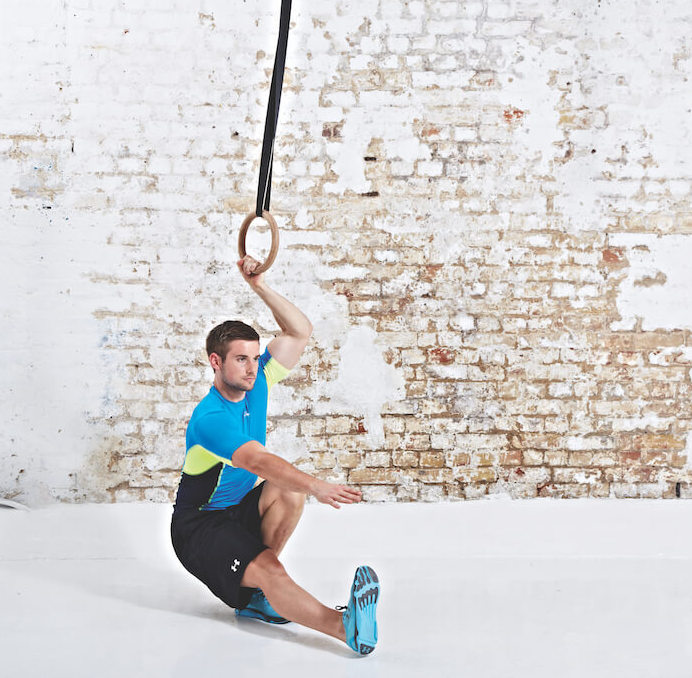 “While the box pistol helps you work on balance, this variation develops the strength and range of motion needed to do a pistol correctly,” says McKenzie.

How to do a supported pistol squat:

Pro tip: “Switching legs in the bottom position and holding each for a few seconds is a great way to work on mobility and the strength needed to support the body with only one leg,” says McKenzie. 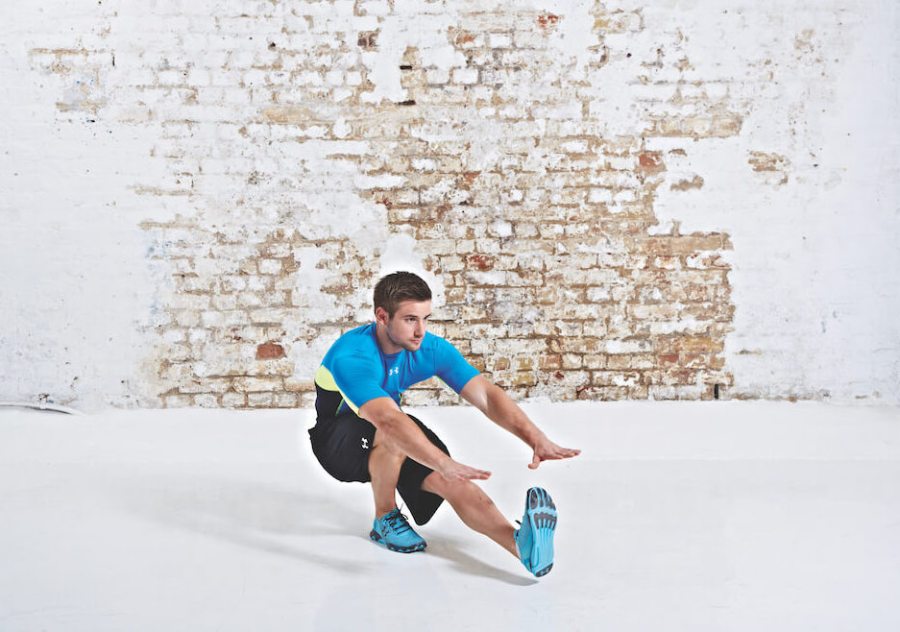 “There’s no cheating with form on this one and it requires perseverance to get it right, but the benefits make it well worth the effort.”

How to do a pistol squat:

Pro tip: “Push the heel of your leading foot out as you start to come up from the bottom position,” says McKenzie. “It will help you to maintain balance and good form.”

“We spend a lifetime moving from one foot to the other,” says McKenzie. “It makes perfect sense to ensure that left equals right in terms of control, strength and balance. The Bulgarian split squat is the perfect tool for training all three aspects.”

How to do a Bulgarian split squat:

Pro tip: “Relax your back leg as much as possible,” says McKenzie. “This move is supposed to build single-leg strength and tensing your back leg will only make the motion more difficult.” 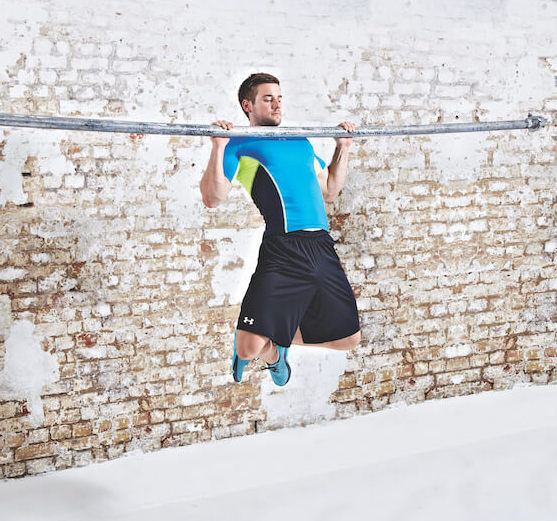 “The pull-up is one of the most challenging bodyweight moves,” says McKenzie. “If someone tells you bodyweight exercises aren’t strength training, ask them to do ten clean reps and watch the smirk dissolve from their face.”

How to do a pull-up:

Pro tip: “Always start from a dead hang with your arms locked out,” says McKenzie. “There’s no point in cheating. If you’re really struggling to get through a set, jump to the top position and slowly lower yourself rather than quitting entirely.” 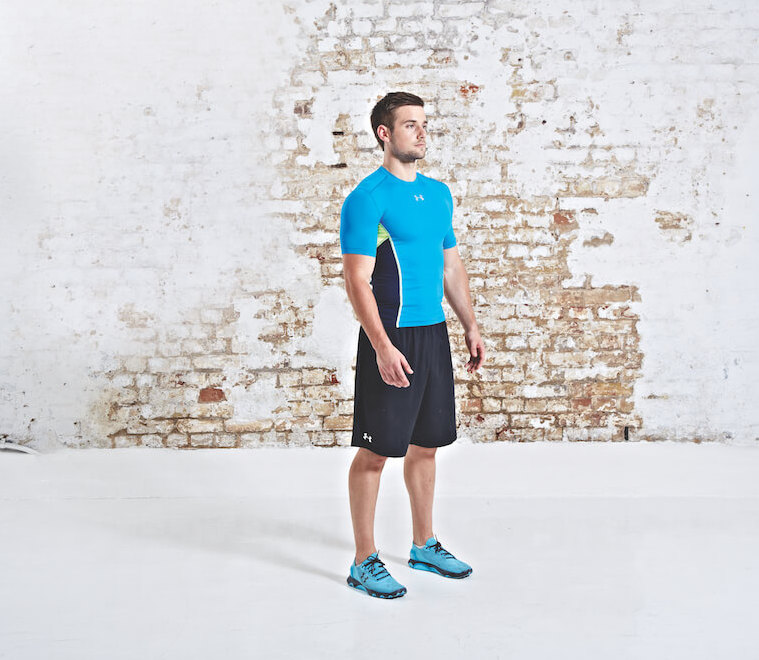 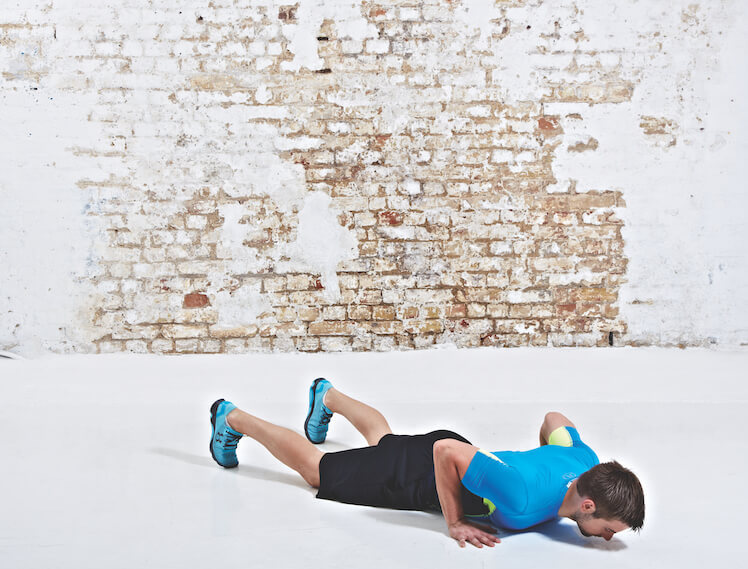 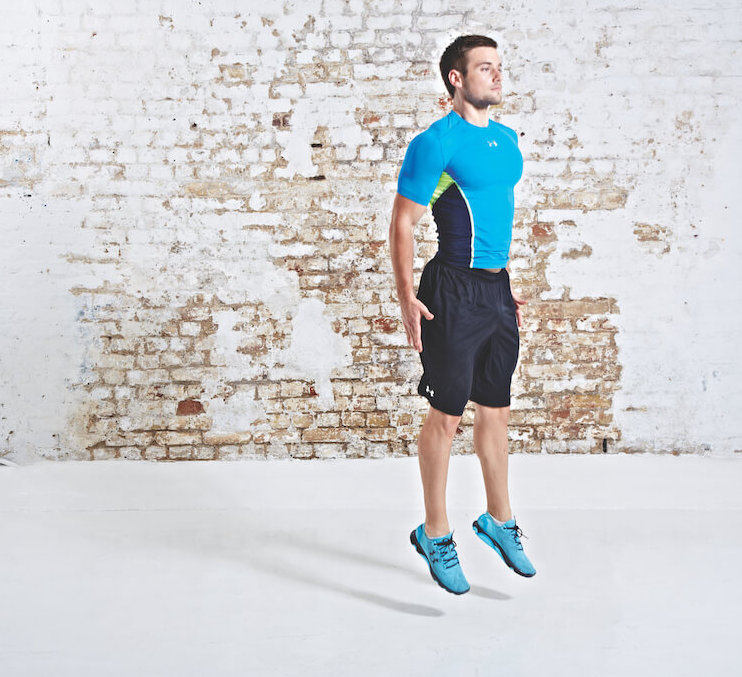 “Like the press-up, this move can be done absolutely anywhere,” says McKenzie. “Unlike the press-up, it’s a total-body move that builds killer cardio endurance and is one of the best fat-burning exercises.”

How to do a burpee:

Pro tip: “Each time you shoot your  legs back, you must keep your gut and butt tight to reduce the force going through the lumbar spine,” says McKenzie. 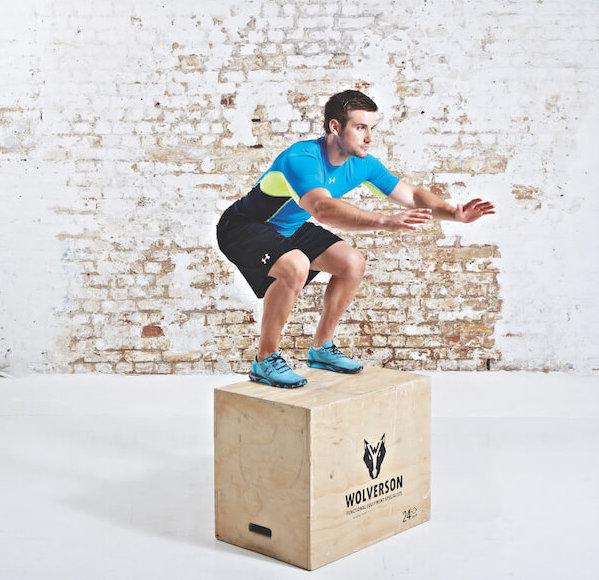 “This is a brilliant way to build the kind of lower-body explosiveness that has all sorts of practical applications, from sprinting to Olympic weightlifting,” says McKenzie.

How to do a box jump:

Pro tip: “Choose a box height you are confident you can make at first,” says McKenzie. “If you want up the stakes, use a soft box so you don’t bash your shins. You’ll usually find you can jump higher with soft boxes too because any shred of fear is eliminated.” 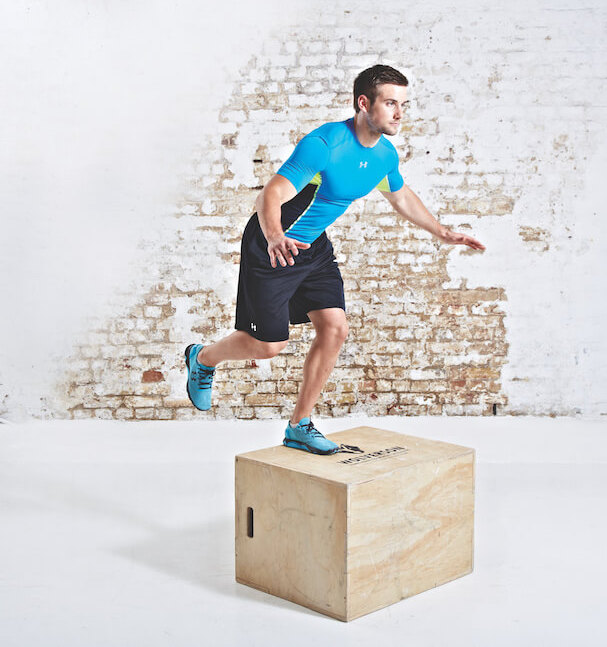 “Developing single-leg power is one of the best ways to transfer what you do in the gym to sports such as football or any running-based activity,” says McKenzie.

How to do a single-leg box jump:

Pro tip: “If you’re finding balance an issue, make sure you keep your eyes focused on one spot ahead of you the whole time,” says McKenzie. “It works like a charm.” 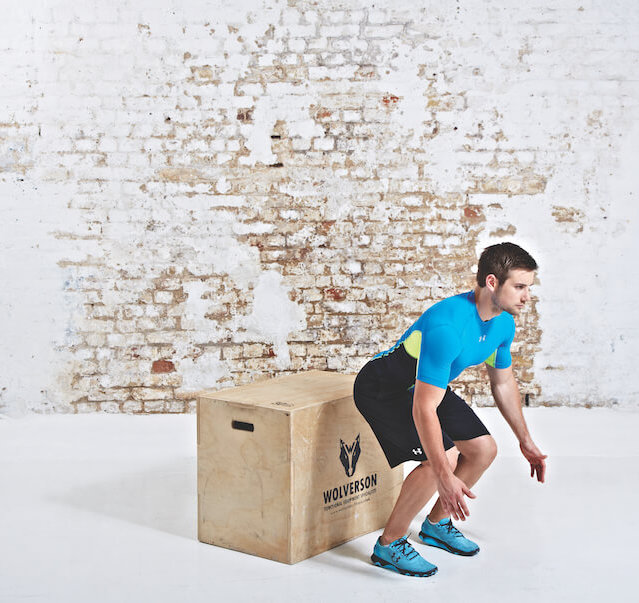 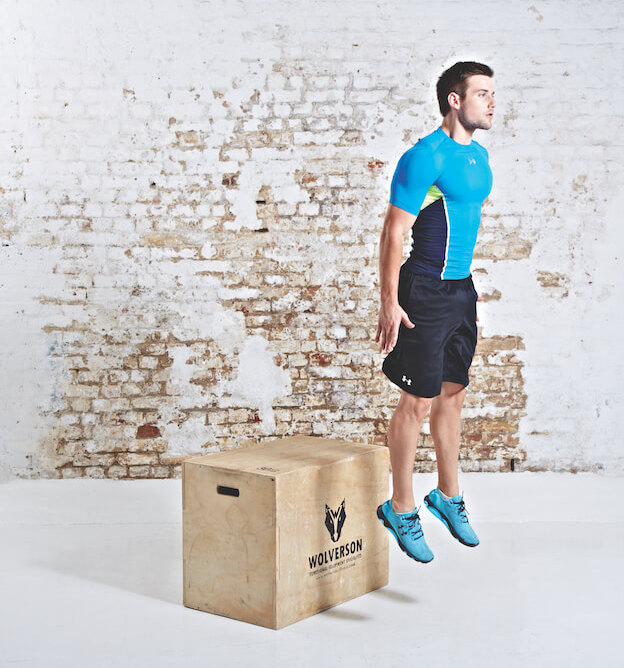 “This was developed by the Russian military. The shock created by the landing engages your muscles more than just jumping off flat ground to help build better explosive strength,” says McKenzie.

How to do a depth jump:

Pro tip: “Keep your core tight and hold your breath as you land, even more so during take off,” says McKenzie. “Timing is also key – make sure the landing and upwards spring are all one motion.” 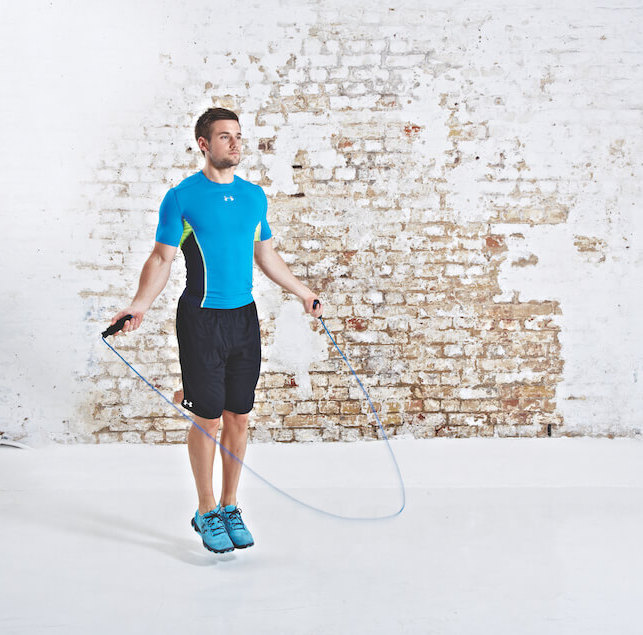 Pro tip: “Relax and you’ll find a rhythm. Tense up and you’ll probably end up whipping your feet,” says McKenzie. “If you’re finding it tough at first, swing the rope to one side so you can get the rhythm down.” 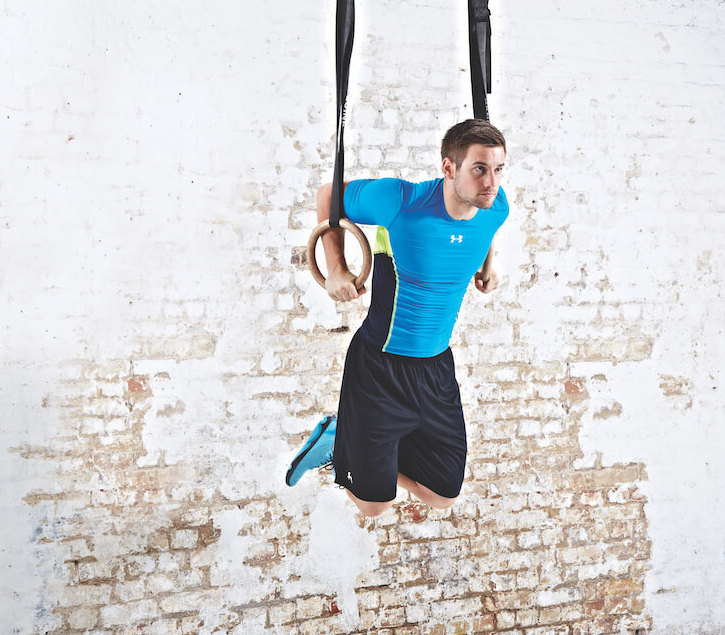 “The dip is like a squat for your upper body because it engages so many different muscles,” says David Jackson, a UK Strength & Conditioning Association accredited coach.”Doing it on rings gives the stabiliser muscles in your shoulders an extra workout, which can help with some of your lifts.”

How to do a ring dip:

Pro tip: “Go as low as you can at first, but as your strength develops concentrate on increasing you range of motion,” says Jackson. “It’ll help massively if you want to move on to more advanced moves such as human flags.” 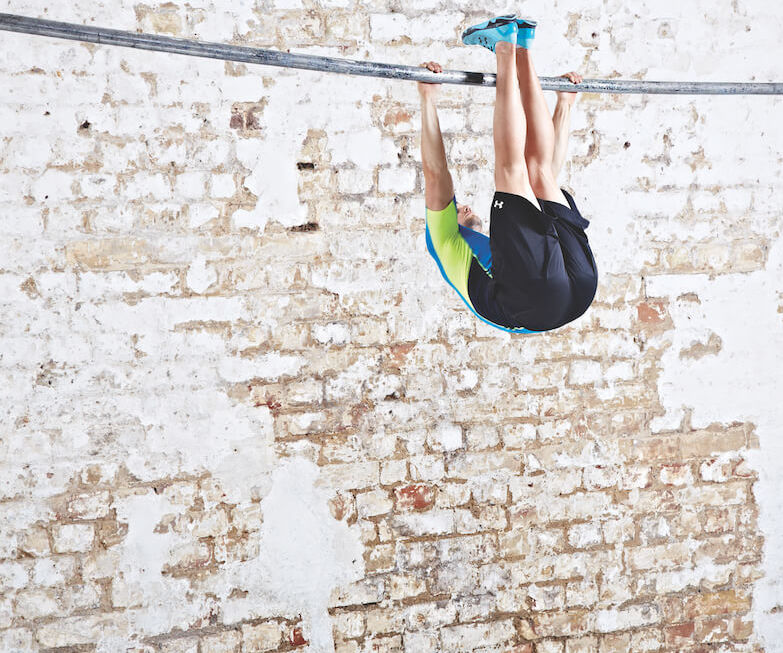 “Hanging exercises help to injury-proof your shoulders because gripping a bar engages the shoulder stabilisers,” says Jackson. “Toes to bar can also help to build a solid six-pack as it places a lot of pressure on your lower abdominals.”

How to do toes to bar:

Pro tip: “Always lower with control to maximise the strength development of the core,” says Jackson. “To create adaptation we need tension, so being lazy and just letting your legs fall won’t help you to get the most from this exercise.” 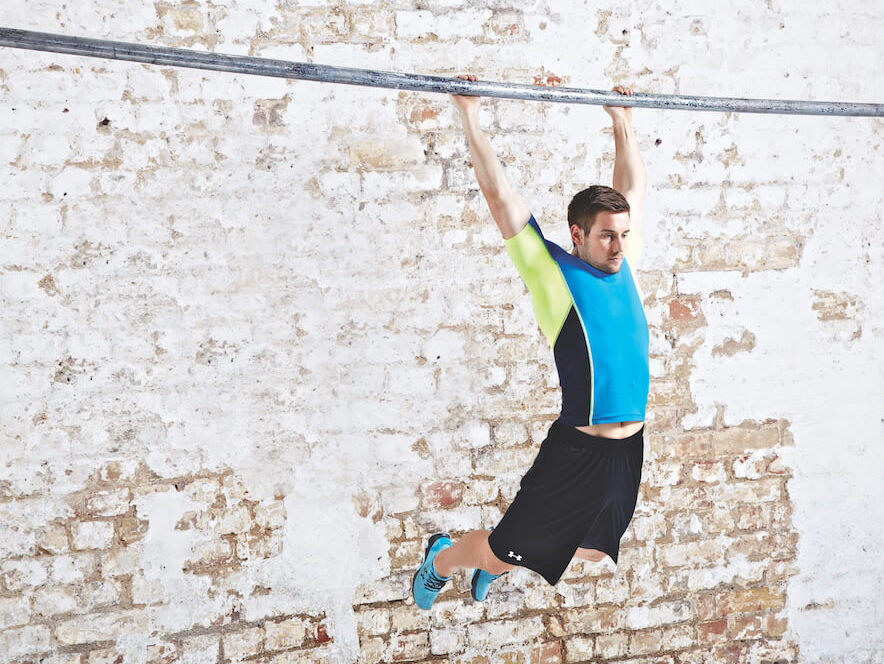 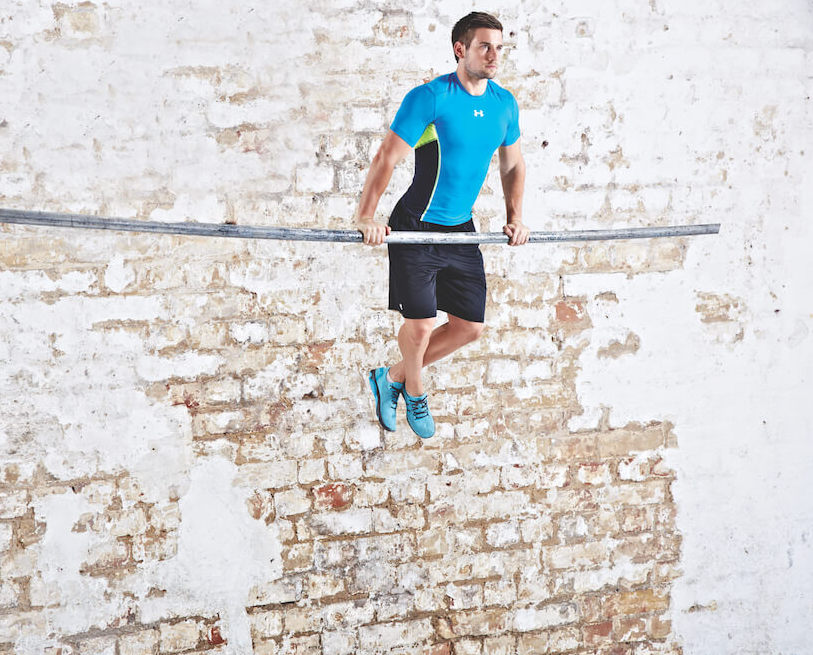 “You can also do this on the rings. The straight bar muscle-up removes the instability rings provide, but that doesn’t make it easier,” says Jackson. “In fact it’s harder because you have to pull yourself up and around the bar to get above it.”

How to do a muscle-up:

Pro tip: “Timing is crucial,” says Jackson. “Practise with your feet in a resistance band tied to the bar to take some of the load. This will help you train the mechanics and timing of the movement.” 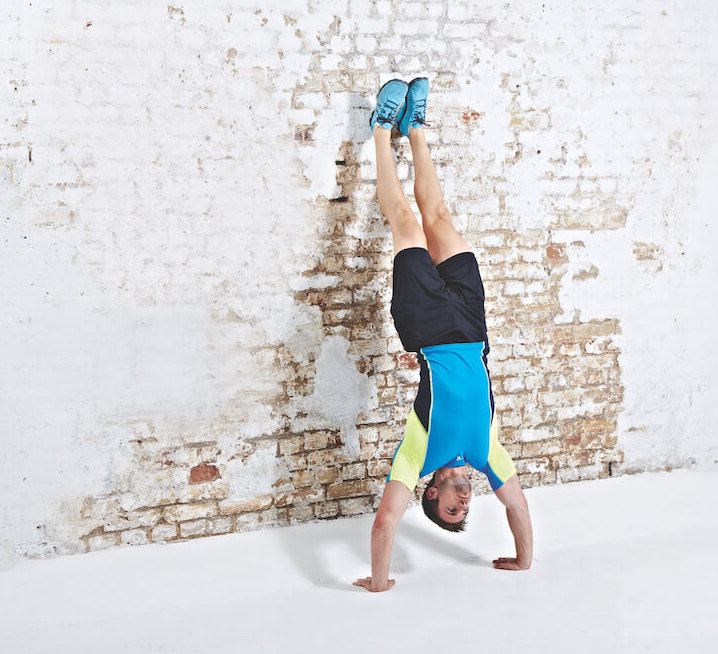 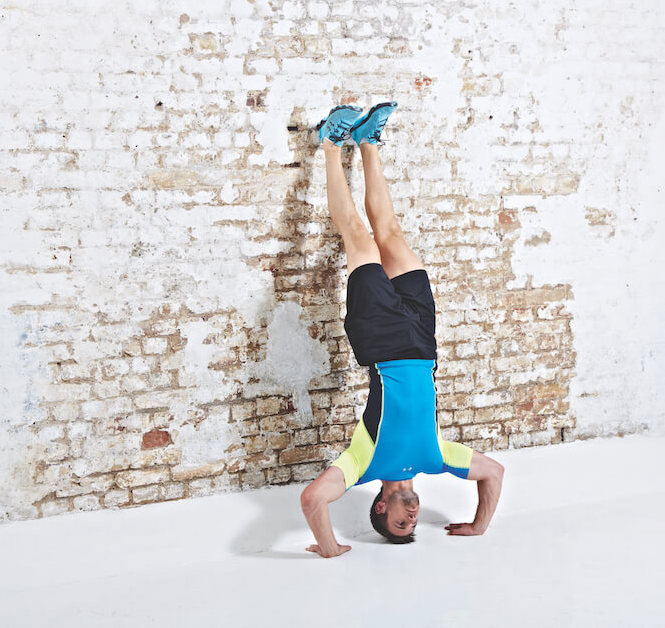 “This is a great way to develop shoulder strength and stability,” says Jackson. “And if you develop the balance to do it without a wall, you’ll look also like a total legend.”

How to do a handstand press-up:

Pro tip: “Once you feel confident, try to rest as little weight as possible on the wall through your legs,” says Jackson. “It’s too easy to think you’re doing a decent rep when really you’re just cheating your way through it.” 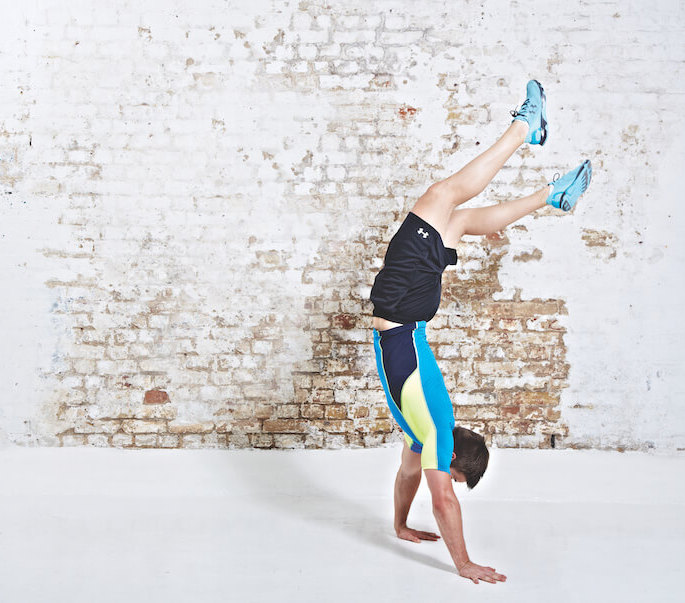 “This is a good move for developing strength and stability in your shoulders while enhancing the coordination of your shoulder joints with the rest of your body,” says Jackson. “It’s also useful if your legs ever get too tired to walk!”

How to do a handstand walk:

Pro tip: “Dangling your legs forwards is the equivalent of an accelerator,” says Jackson. “Have a friend on standby to catch and reset your legs if you get overeager.”