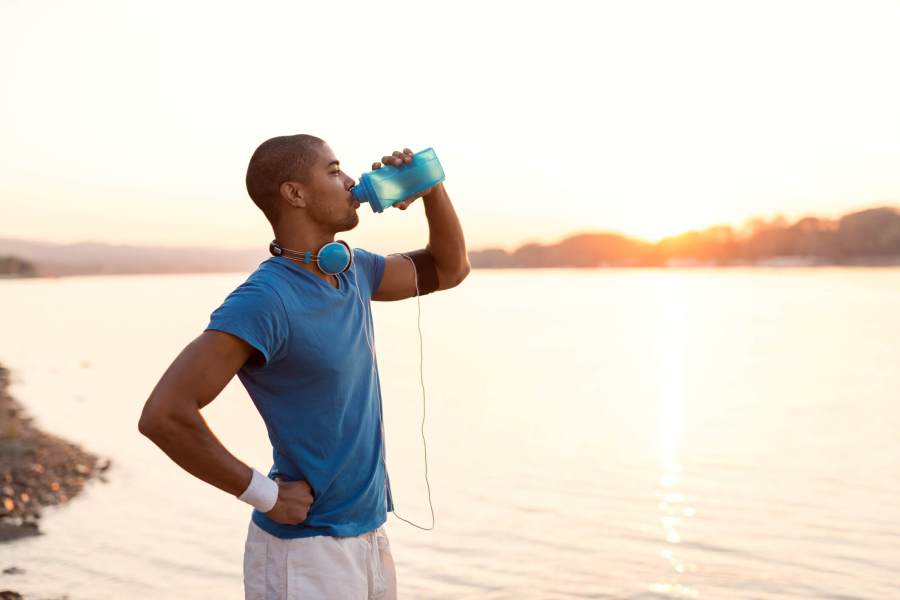 However, the heat also puts athletes at risk of dehydration, which increases cardiovascular strain, glycogen utilisation and muscle lactate to make exercise feel much harder than it should.

“Hydration matters,” says sports nutritionist Will Girling. “Research suggests dehydration of just two per cent of your bodyweight causes a significant drop in performance. So if a 100kg athlete loses 2kg of water, that will be very detrimental.”

The good news is that with smart hydration strategies you can manage your fluid loss to ensure you enjoy the benefits of the hot weather, without succumbing to the hazards.

With that in mind, here are five strategies for staying hydrated this summer.

Whether you’re doing a sweaty indoor gym session, or a run or bike ride outside, your hydration plan should kick in early.

“Always hydrate before you do your workout,” explains Girling. “Drink 400-600ml of water two hours beforehand. The simple test is to go to the bathroom and examine your urine: if your passing is dark in colour, have another 400-600ml before your class or bike ride.”

That is especially important if you’re exercising in the morning.

“It can be really hot in the summer, but people wake up and go straight out,” says Girling, “even though they’ve suffered water loss from sweat overnight, so they’re not in a hydrated state.”

How much liquid you need to drink during your workout will depend on what exercise you’re doing.

“Always take a bottle with you and hydrate as much as you can, but if you’re going to the gym your workout will probably be under an hour, so drinking ad libitum – that’s drinking to thirst – will be fine,” says Girling.

For longer endurance exercise, however, you need a stricter strategy:

“The general recommendation is 500-600ml per hour of activity. Anything more than two hours and you really need to stick to that 500-600ml rate, which is roughly one bottle per hour.”

Use a watch or bike computer to set reminders to drink, and plan your route to allow you to refill your bottles or buy extra water en route.

Sweating is your body’s defence system against overheating. Unfortunately, though, when you sweat you lose some important minerals known as electrolytes, including sodium and potassium.

Electrolytes support a number of bodily functions, including energy production and fluid balance.

“It is very important to replace the electrolytes lost when you sweat,” explains Girling. “At best, you will see an unwelcome decline in your performance. At worst, you can get hyponatremia (low blood sodium) which can be deadly.

“So, during extended exercise, take on an electrolyte source once an hour. Around 400mg of sodium – or one electrolyte tablet – should cover most people.”

4. Know Your Own Body

One of the best ways to navigate hydration issues is to get to know the symptoms. The quicker you spot them, the easier they are to correct.

“The common signs of dehydration are dry mouth and thirst but if you start to get into a two per cent bodyweight loss or greater you will experience headaches, nausea and dizziness,” says Girling. “Being low on electrolytes can cause nausea, too.”

React quickly to any warning signs to make sure you don’t deteriorate further.

Your hydration protocols shouldn’t stop the moment you get home.

Aim for around one bottle per hour until your urine has returned to its natural pale colour.

Remember, you will continue to lose extra fluids through sweating and urination at home, so keep on sipping long after you finish.