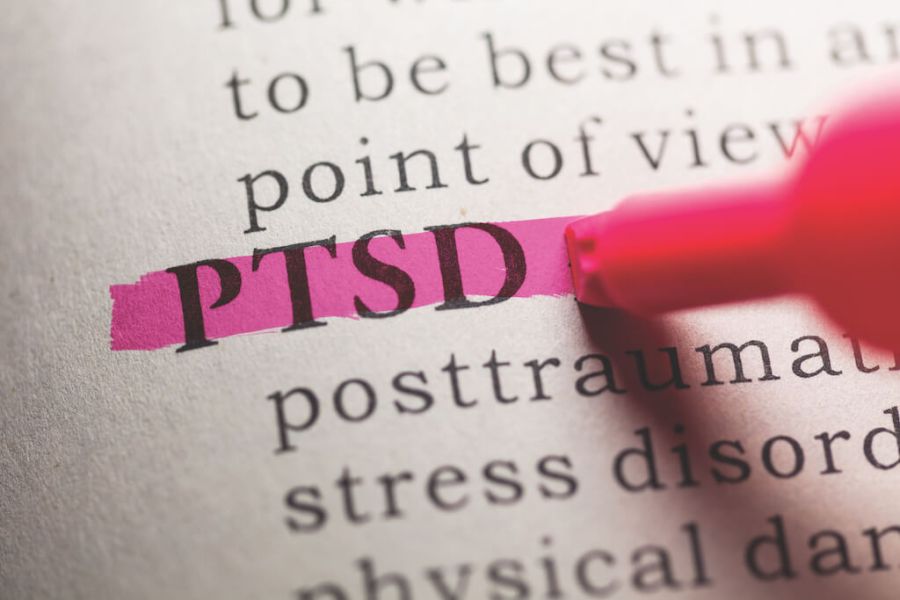 “I think when you hear the term ‘PTSD’, you immediately think of people who have been in Iraq or Afghanistan and the horrific things they have dealt with,”says Arun Gray. “But everyone’s tolerance to trauma is different.”

Gray, a sports therapist, was 21 when one of his closest friends collapsed while they were playing football. A trained first aider, he performed CPR on his friend for 40 minutes before an ambulance arrived.

“It all happened so quickly, so it wasn’t until afterwards when it all sunk in,” he says. “A few hours later, I found out that Craig had passed away after suffering a cardiac arrest. He was just 18 years old at the time. I was 21.

“When he collapsed, he suffered a large cut to his head, which bled a lot. The main issue I remember afterwards was recalling the smell. I had a shower as soon as I got home a couple of hours later, and remember washing over and over again to get the blood off of my hands and to get rid of the smell. But I could still smell it for some time after. I think that is what affected me the most.”

When Christian Eriksen collapsed on the pitch during a Euro 2020 match last summer, Gray says he was immediately triggered:

“I was watching the game live on TV and instantly felt my stomach drop. My heart rate shot up, I felt sick and, if I’m 100% honest, I just burst into tears. I struggled to sleep that night. I was living alone at the time, but didn’t feel like I wanted to call anyone to talk about it.”

Gray says he deals with his PTSD by sharing his feelings with his partner, while workplace training has helped him understand the condition, and how to manage triggers when they come.

He is one of around one in three people in the UK who go on to struggle with post-traumatic stress disorder (PTSD), or complex PTSD, after a traumatic event.

A condition once believed to affect only those who had fought on the frontline, today there is greater awareness that trauma can take different forms, and lead to long-lasting mental health issues. According to the NHS, symptoms can include flashbacks (which can be triggered by the senses), insomnia, guilt, irritability and nightmares.

“Despite an increase in the awareness of PTSD, there’s not a huge level of real understanding of the condition,” says Jacqui Suttie, founder and CEO of the charity PTSD UK, “and there are still many misconceptions about the condition that can be really unhelpful, and actually damaging to people with it.

“It’s estimated that 50% of people will experience a trauma at some point in their life,” she adds. “The defining characteristic of a traumatic event is its capacity to provoke fear, helplessness or horror in response to the threat of injury or death and therefore it can affect anyone.”

“I think of it as splinters of trauma that embed inside you and you can have reactions with regard to what’s in the present day,” says Floss Knight, founder of the UK Therapy Guide and owner of West London Therapy, Chelsea and Fulham. “You’re re-living those experiences.”

When Labour MP Nadia Whittome revealed in May 2021 that she was struggling with PTSD and was taking time off to prioritise her mental health, she received abuse online from people claiming she couldn’t suffer from the condition as she hadn’t fought in a war. Ignorance about the condition is still rife, despite a growing understanding of how everyone can be affected by mental illness.

In January 2013, Andy Tucker was in a heavy metal band and had his own business booking acts to play in his native Wales. Yet his life changed completely when he was knocked off his motorbike in a road rage incident.

Left with a torn anterior cruciate ligament, extensive muscle damage to his legs, an inverted ankle, and limited movement and permanent deformity to his right shoulder – as well as scoliosis and spondylitis in his spine – he spent the following six-and-a-half years in and out of hospital, undergoing extensive surgeries. Beyond the physical injuries, Tucker was also left with anxiety, depression and PTSD.

Having struggled to connect with the more traditional therapeutic methods of treatment, Tucker discovered he could ease his struggles with PTSD through motorsport.

“I found a study online when I was looking for self-help,” he says. “It was a three-year study by Team BRIT, showing the effects of motorsport on veterans. That opened my eyes up and made me think, well, I love motorsport, it has always been a passion of mine. I did karting as a kid. This could be the way to kind of rebuild my life. Not just start to rebuild myself physically, but mentally, too. It turns out it was the key.”

The all-disabled Team BRIT turned out to be a lifeline for Tucker, who excelled when he tried out for them in their Racing Academy sessions in 2019, and is now looking to help the team get to the iconic Le Mans 24 hour race. Team BRIT has a track record in helping people with physical and psychological challenges access motorsport, and improve their wellbeing in the process.

“I can close my eyes and think back to my first race weekend with the team whenever I have one of my triggers,” says Tucker. “The triggers are definitely not as strong now,” he adds.

“Don’t get me wrong, I still struggle with it, but the racing has really helped to keep me level-headed and give me something to look forward to and focus on. When I do have a little trigger, I can just sit there and think, Just let it go. Give it five minutes. It’s going to subside, then you can carry on and focus on the next thing you’re doing.”

While Tucker’s experience shows there are varied ways of handling PTSD, treatments such as cognitive behavioural therapy (CBT) and ‘eye movement desensitisation and reprocessing’ (EMDR) therapy are shown to have good results.

The latter has become increasingly popular, with patients reliving past trauma while following their therapist’s fingers as they move them back and forth. It’s believed that this can retrain the brain and help make past events less distressing.

However, some therapists believe reliving traumatic events is problematic.

“Since there is a requirement to revisit the traumatic event in vivid detail, both CBT and EMDR can be emotionally painful for the patient,” says Terence Watts, a therapist who has pioneered a new treatment, ‘brain reworking recursive therapy’ (BWRT), which he says is less intrusive and is less likely to lead to relapses.

“BWRT requires the patient to re-experience the traumatic situation for no more than two or three seconds, instead of holding it firmly in their mind as they have to with CBT or EMDR,” says Watts.

“There is a small time lag, just under half a second, between the physical brain responding to the trigger and the feeling flooding into the conscious mind, and it is in that gap that BWRT does its work.

A special technique is utilised that stops the response in its tracks long enough for it to be reorganised, and in this way, the traumatic event is easily reclassified as a past, non-active event, and therefore is no longer seen as a dangerous situation.”

Chenoa Parr, a communications consultant from Liverpool, began suffering with PTSD after being bullied by her boss.

“They came in to shake things up and saw me as a target,” she says. “They would ask me to stand in front of a room full of my peers and make fun of what I was saying, laugh at me, tell others how pathetic I was, undermine my authority, explain that I was not good enough.”

The resulting anxiety, sleeplessness and lack of concentration led to her almost taking her own life by stepping in front of a train. And while she says her GP was helpful and the CBT course she undertook helped greatly, when the pandemic hit it triggered memories of her suicidal feelings. It was then that she tried BWRT:

“BWRT is different from other therapies I had tried, because it was fast. I didn’t have to spend months talking about it and reliving my trauma or explaining in detail to a stranger what had happened. Also, BWRT has a lower relapse rate, so I feel confident that I’ve dealt with that time in my life and won’t be triggered again.”

While its efficacy is praised by those who have tried it, BWRT is still in its early stages, with widespread research not due to be published until 2023. EMDR was developed in the late 1980s but was only approved for NHS treatment in 2010.

As with so many mental health conditions, accessing treatment on the NHS remains challenging at best and impossible at worst. It’s a situation that Floss Knight calls ‘shocking’:

“The waiting list right now is three years. They are having more suicides, self-harm admissions, there’s nothing new available.”

A proponent of EMDR, Knight is campaigning not only for mental health education to be part of the national curriculum, but also better placed funding within the NHS to help those struggling right now.

“Some people aren’t lucky enough to get through this stuff,” she says. She is working to develop frameworks for offering low-cost therapy, but remains concerned that too many PTSD sufferers are falling through the cracks.

“Therapy isn’t the end of the road,” she adds, “it’s the beginning. And if we best know ourselves, then we better know the triggers for trauma.”

Education remains the key to dealing with PTSD, agrees Watts: “It’s all about helping people to understand that PTSD has nothing to do with psychological strength. The main thing people should know is that it is never a sign of weakness.”

One of the most common therapies for a range of mental health conditions, CBT for PTSD works by getting the patient to relive past experiences, while a therapist identifies and breaks down any unhelpful beliefs that may have grown from the event. These are reviewed over a number of sessions, with the aim of giving the patient concrete actions to work on whenever they are triggered.

By following the movement of a therapist’s hand while recounting traumatic experiences, EMDR is believed to reduce PTSD symptoms, helping patients reframe negative feelings and see them in a different light. Treatment can also be carried out through the tapping of a foot or while listening to music.

Used by veterans and other PTSD sufferers, EFT involves tapping acupuncture points and repeating positive affirmations, while also stating the issue that causes pain and suffering. Repeated sessions are shown to lessen the symptoms of conditions such as PTSD.

Currently undergoing research, BWRT is said to have a low relapse rate, and requires only a handful of sessions in order to work. It focuses on the split second between a trigger response and the response hitting the conscious mind. It is not yet available on the NHS, although therapists using this method can be found online.

3 ways to get help for PTSD

While NHS services are stretched, your GP will have the best understanding of treatments available in your area.

Charity PTSD UK has a wealth of resources for both the newly diagnosed and long-term sufferers. Its website has a range of articles and links to services that can help.

Mental health charity Mind can help with PTSD, pointing towards places for treatment and understanding symptoms for those worried about themselves or loved ones.