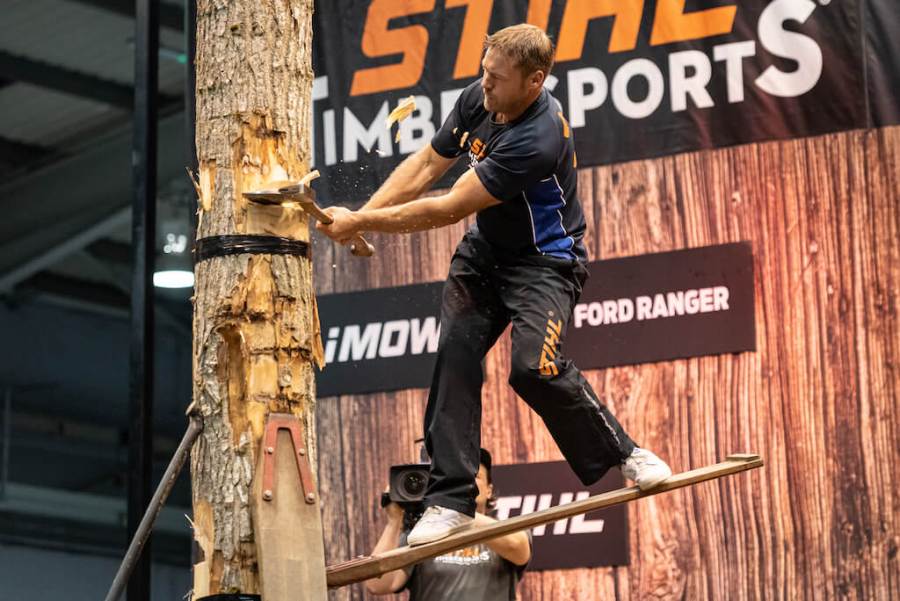 The air is thick with sawdust, exhaust fumes and the deafening roar of an enormous chainsaw. How deafening? 125 decibels is one conservative estimate – not much less than a jetplane taking off. Champion lumberjack Elgan Pugh is on stage, wielding his custom-built cutting machine. Powered by a 250cc, 70hp go-kart engine, and armed with a 32-inch blade, it slices through an 18-inch-thick tree trunk in seconds.

Pugh is competing at the Telford International Centre in the Stihl Timbersports British Pro Championship, a professional event that sees the nation’s finest axe men chopping and chainsawing their way through various lumps of wood, testing their skills as well as their fitness and strength.

It’s a sport known generically as wood-chopping. Around the world there are different competitions with different events and different sponsors. But it’s the German chainsaw manufacturer Stihl which stages arguably the world’s leading competition, the Stihl Timbersports Series, with competitions across Europe, North America and Australia, culminating in an annual World Championship.

Thirty-nine-year-old Pugh, a builder from Bala, on the edge of Snowdonia, is doing his best to qualify for those world champs. He has already impressed the small crowd of supporters with his exploits in the previous disciplines. The most athletic of all was what’s known as the springboard, where competitors have to chop notches into a big tree trunk and then, climbing up onto a board wedged into those notches, they must sever the top of the trunk completely with their axe. It takes consummate skill and a great deal of strength. Pugh is in fine form, nimbly climbing to a position two metres off the ground, swinging his axe in a sweeping parabola that makes quick work of the trunk. His wife and two of his four kids are in the audience cheering him on.

The wood, mostly poplar, is secured in steel frames so that competitors can attack it with gusto. They compete two at a time on stage, with a referee checking every cut is performed correctly. In-between rounds, a crew leaps onto stage to clear away the offcuts, the wood chips, and the ever-mounting piles of sawdust.

Meanwhile, off-stage, the other competitors are limbering up: doing lunges, and stretching their hips, calves and arms. With such heavy equipment to wield, they need to be both strong and flexible. Some are donning special chainmail socks to protect their feet and legs from an errant chop. Others sharpen and lubricate their axe blades, or apply chalk to their palms to guarantee a secure grip. These axes are huge – nothing like you’d find in your local B&Q – and no one wants to see one flying off the stage. With power tools, and more than a bit of facial hair, there’s an unambiguous macho element to this sport. Nevertheless, the safety regulations are strict. For the chainsaw events, ear and eye protection are mandatory, as well as protective trousers.

Already five-time winner of the British Championships, Pugh has been doing this sport for 12 years now. His first introduction was at a county show near his home in Wales.

“The guys said, ‘Come and do some training with us,’” he remembers. “So I kept training and training, and I thought, ‘Bloody hell! I’m not too bad at this.’”

Nowadays, he’s a member of a small wood-chopping club called the Clwyd Axemen, who offer demonstrations at agricultural shows and carnivals. They rent a yard with all the required saws, axes and training facilities but, as Pugh, explains, the lion’s share of his practice is done in his workshop at home in Bala. His day job involves running a construction company, so there’s no shortage of tools, nor the skills required to handle them.

“If you want to take the sport seriously, you have to have home-training facilities,” he says. “If I didn’t, I wouldn’t be where I am today.”

Alongside his chainsaws and axes, Pugh keeps fitness equipment and a few weights. He does mainly CrossFit-style circuit training, plus lots of cardio work on a rowing machine, a road bike and a mountain bike. Strength conditioning is less important, he says, but includes bench press, deadlifts and squats.

“I’m not here to break the deadlifting record,” he stresses, pointing out that he stands at 5ft 9ins tall, weighing in at 92kg. “The gym work helps in this sport, but the best training is simply doing all the chopping and cutting. In fact, the best thing about the cardio training is it allows me to do more axe and chainsaw training.”

He believes the disciplines of his sport are 75 per cent technique and only 25 per cent physical.

Many of Pugh’s rivals have a similar training set-up. One man snapping at his heels is fellow Welshman Glen Penlington. The 30-year-old from Knighton, in Powys, runs a building firm with his father. Their workshop, on a local farm, has a training shed attached to it with all the tools and facilities he needs. It was his father who first introduced him to the sport when he was a youngster. Penlington practises chopping and sawing three evenings a week, and trains with free weights or his SkiErg two evenings a week. He also mountain bikes and cross-country runs in the hills near his home. “It’s not flat around Knighton!” he adds.

5ft 9ins and 13st, he’s one of the smaller competitors, but he says lightweight agility is a bonus, especially on the springboard:

“Hit rate and speed, rather than brute force, are key. A lot of people think you have to be big and strong for this sport, but as long as you’re fit and active, you can be good at it.”

Another competitor is Scotsman Graham Turner. Hailing from Penicuik, not far south of Edinburgh. He is one of the tallest in the competition, at 6ft tall and 120kg. A fencing contractor by trade, he reached a high level in amateur rugby and golf before switching to wood-chopping in 2019.

Turner describes the thrill he derives from such a dynamic sport. “The adrenalin, the rush of being on those logs, chopping and sawing… there’s a huge competitive side to it. It’s you versus that log. But also there’s this camaraderie with the other competitors. It’s like being back playing rugby, except you’re competing on your own.”

Back in the competition, Pugh is preparing for the final event: the Hot Saw. Specially manufactured by a German engineer at a cost of €5,000, his Rotax chainsaw, with its 250cc engine, looks like a grisly monster-killer straight out of a sci-fi film.

As he starts it up, the chain reaches speeds of over 150mph. On the mark, he lifts his saw into place, makes first one cut downwards through the huge log, then one cut upwards, and then a second cut downwards. It’s all over in 8.42 seconds. He’s the fastest of the competitors, and wins the competition – his sixth consecutive title.

On the podium, liberally sprayed with champagne by his rivals in second and third place, Pugh shows his joy at proving yet again he’s the best in the UK. He takes home a trophy and £1,000 in prize money.

Wrapped in the Welsh flag, he still berates himself for a few minor errors he’d made during competition. This man is a perfectionist. “You have to be really,” he says. “If you want it to be right, there’s no other way.”

Intrigued? Find out more at stihl-timbersports.com