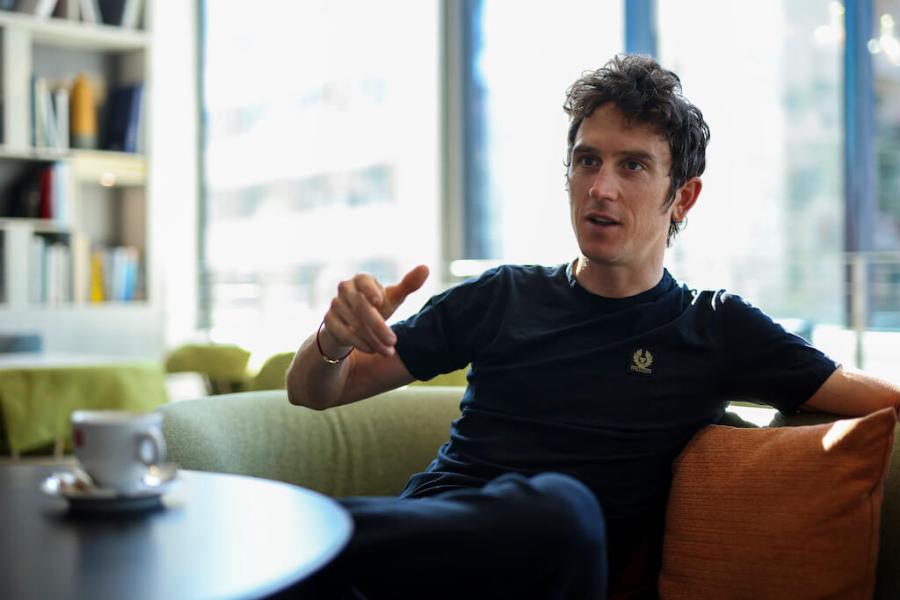 In the electrifying final of the team pursuit at London 2012 – ten years ago this summer – Geraint Thomas and his track cycling teammates raced around the indoor velodrome at speeds of over 60kph, covering 4km in a world-record time of 3 minutes and 51.659 seconds, to claim a memorable gold medal.

The explosive event – in which teams of four pedal in synchronicity just inches from each other’s wheels – saw Thomas unleash a brutal display of power in a short but excruciatingly intense effort.

The intensity of the action is so high that riders’ brains become starved of oxygen and black dots drift before their eyes.

Just six years later, he was excelling in a very different event. At the 2018 Tour de France – the famously gruelling three-week endurance race over the French Alps – he pedalled 3,351km (the equivalent of cycling from London to Tbilisi in Georgia).

He completed half-a-million pedal revolutions. He torched 125,000 calories (an energy expenditure so great he’d need to eat 416 McDonald’s cheeseburgers to replace it). And he climbed 50,000m, the equivalent of cycling from sea level to the summit of Mount Everest five-and-a-half times.

After 21 days of pain and suffering, Geraint Thomas became the first ever Welshman to win the iconic ultra-endurance race.

But sports scientists know that what he achieved was seriously impressive: switching from track to road is a bit like an 800m track runner evolving into an ultramarathon champion.

“When my race was over 4km on the track, our record time was 3 minutes and 51 seconds,” Thomas tells MF. “But when I won the Tour de France, which is over three weeks, I won it in a time of just over 81 hours, so it’s quite a difference.”

The 36-year-old is speaking to us from his home in Monaco, where he lives with his wife Sara and son Macs.

“Initially, when I went from track to road, the first months were hard.

On the track you use your carbs straight away for energy and it’s really punchy and intensive over a short period. But moving to the road, you lack that real endurance and you have to eat a lot so you’re not blowing up after three hours on the bike.

“Power-wise, it’s different as well, because if you’re going uphill at the Tour de France the effort might need to be for two-and-a-half hours.”

Based purely on physiology, Thomas shouldn’t be a Tour de France champion. Road cyclists are typically short and lean: when you’re cycling over the Alps every additional kilo of weight is like hauling an extra bag of sugar uphill.

But he is 6ft tall and naturally powerful. At Whitchurch High School in Cardiff (which has a habit of producing world-class athletes, including Gareth Bale and Sam Warburton), he thrived in power-based sports like rugby and swimming.

After discovering track cycling aged ten, and joining the British Cycling set-up aged 18, he initially focused on the power-based track events – and with Olympic golds at both Beijing 2008 and London 2012, did pretty well.

When he sampled his first Tour de France in 2007, with Barloworld, he finished 140th out of 141 riders. But after deciding to commit fully to road cycling in 2013, he initially worked as a support rider at Team Sky (now rebranded as Team Ineos Grenadiers), before becoming team leader in 2018 – the result of an amazing physical transformation.

“It was a massive challenge,” he admits. “In Beijing I was a lot bigger. I was just all muscle and power back then. Power-to-weight never came into it for us.

“On the track, it was more about repairing the muscles and being able to go again the next day, rather than trying to be lean and thinking about your power-to-weight ratio.

But he insists that new fitness goals and challenges are what keep us motivated over time.

“If you have goals in mind that you are working towards, that is what gets you out of bed in the morning,” he explains. “You’re always training for something.”

To kick-start his transition from power to endurance athlete, Thomas used a winning combination of science and suffering.

Drawing on cutting-edge advice from Ineos Grenadiers’ impressive sports science team, he performed long, seven to eight-hour rides to teach his body to burn its own fat for fuel.

He did heart-pumping ‘spiked’ interval sessions in order to force his fitness levels – and his pain threshold – ever higher. And on gritty camps in Tenerife, he repeatedly rode up the high-altitude Teide volcano to develop more oxygen-carrying red blood cells.

He also committed to low-carb training rides, eating a protein-rich omelette or Greek yogurt for breakfast – without any carb-rich toast or oats – to keep his weight down and force his body to burn fat.

It was a brutal endurance-building regime. But Thomas says he relishes the suffering:

“It’s kind of the norm now, I guess. You go through so much pain and suffering in training. But it is all worthwhile when you’re suffering and in pain, but you are at the front of the bike race. You get a buzz off that.”

As he gets older and savvier, Thomas is starting to do things differently.

“I’ve always been someone who responds well to high volume,” he says, “so I’ve kept that in, but my training over the last few years has changed a bit with more fresh efforts.

“My whole attitude since I was a kid was that if I don’t get home from training nailed and on my knees or starving I haven’t worked hard enough.

“Whereas with my new coach Conor (Taylor) it is more about being fresh for the big efforts, so I get more out of them. I still do long, low-carb rides, but they are not as extreme as they used to be.” 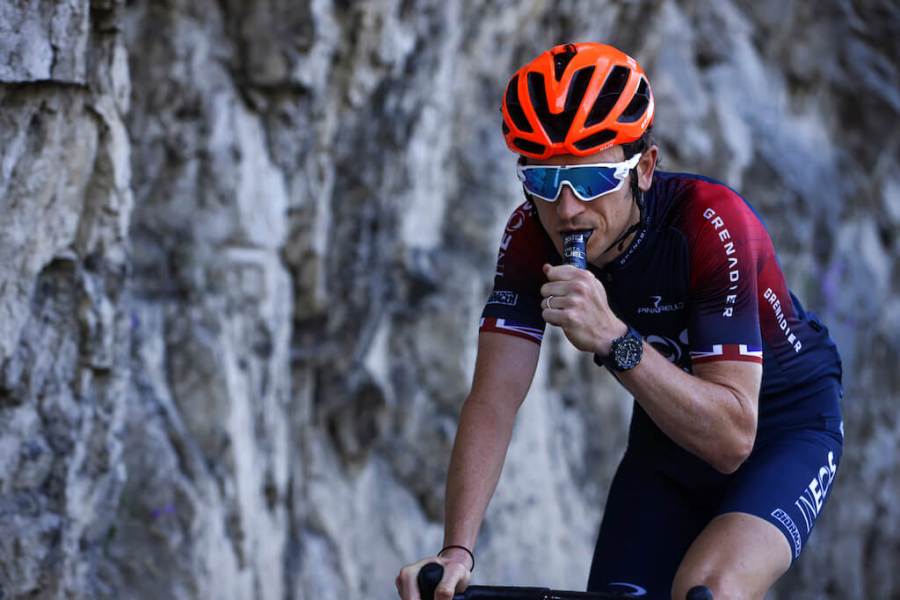 Smart nutrition has also been a key component of Thomas’ physical transformation. As a general rule, he adheres to a monkish diet of fish, salad, vegetables, rice and quinoa, with healthy fats coming from avocadoes, salmon and olive oil.

“I’m not naturally a 69kg person,” he says, “so getting down to that is hard, and you really push your body to extremes, whereas some of the other riders are naturally smaller climbers with smaller physiques. That’s the hardest part for me, for sure. It is something I won’t miss when I stop.”

Although Thomas counts the calories at mealtimes, in recent years he has been eating more during his training rides and races. And new research from his team’s sponsor Science in Sport now also suggests riders can absorb 120g of carbs per hour – 30g more than the 90g per hour typically targeted by pro cyclists – by combining different but complementary sources of carbs.

This can be achieved through liquids, gels, chews or solid snacks, with Ineos riders typically glugging Science in Sport’s Beta Fuel drink, which combines maltodextrin and fructose to optimise in-race carb intake.

When he won the Tour in 2018, he happily ditched his restrictive regime and enjoyed a blow-out with beers and pizza.

“The celebrations continued for another six months really,” he laughs. “It was a mad time. But I just wanted to make the most of it because I was 32 and you really need to enjoy the good times. I made sure I did.”

Fresh from the 2022 Tour, Thomas is now gearing up for the Commonwealth Games in Birmingham, where he hopes to compete in the road race and time trial events:

“Ever since I turned senior, I’ve only represented Wales twice, in Melbourne (2006) and Glasgow (2014. Since it’s so rare, I really hope it will be good.”

But as an athlete who craves new challenges, he’s already considering taking his power-to-endurance transition even further, by doing his first Ironman event when he eventually retires from road cycling:

“If I were to just retire from cycling and not have a goal to strive for, I think for my mental health it would be hard.

“Training for an Ironman will certainly wean me off professional cycling. I’m not looking to do it too seriously, but I know as soon as I start running or swimming I will start chasing times.”

Part of the revolution in endurance fuelling, Geraint Thomas and the INEOS Grenadiers are a proud partner of Science in Sport. Visit scienceinsport.com/betafuel