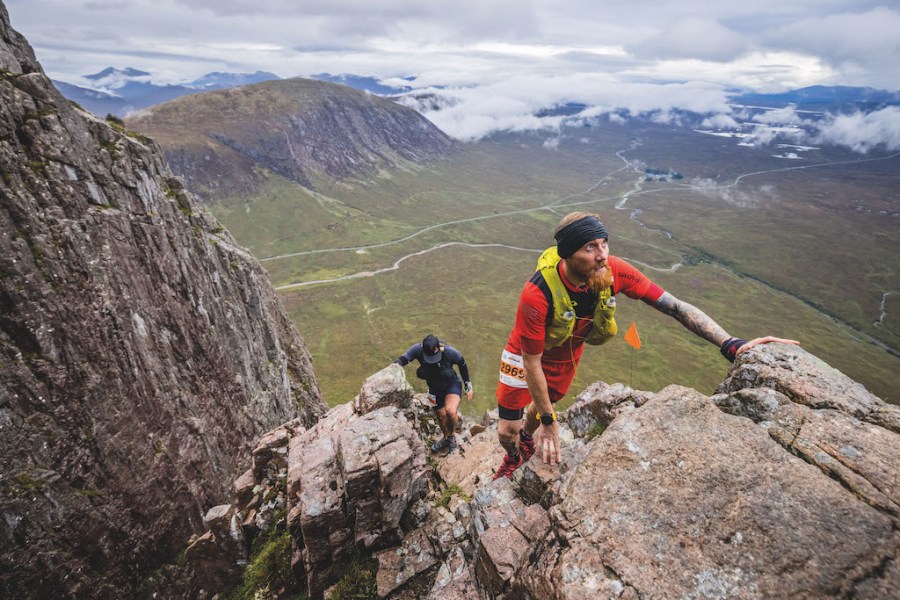 Toughness, in its real sense – of showing grit in the face of adversity, proving adaptable in the wake of physical and mental challenges, as well as creating  functional, resilient bodies as opposed to popcorn gym muscles – is a quality  we shouldn’t resign to the dustbin of masculinity too quickly.

In creating this Toughest Races on Earth feature, we’ve thought a lot about what it means to be tough.

Recruiting ideas from winning competitors, coaches and race organisers from around the world, we’ve learned that it’s not so much the distances involved (though that certainly comes into it), but the eye-popping intensity, obstacles to overcome, and sheer training volume required.

Whether it’s that Herculean effort to rise early on 1 January for the Knacker Cracker 10k, or managing the family and work commitments necessary to train properly for the 100-mile UTMB®, toughness is required in spades. 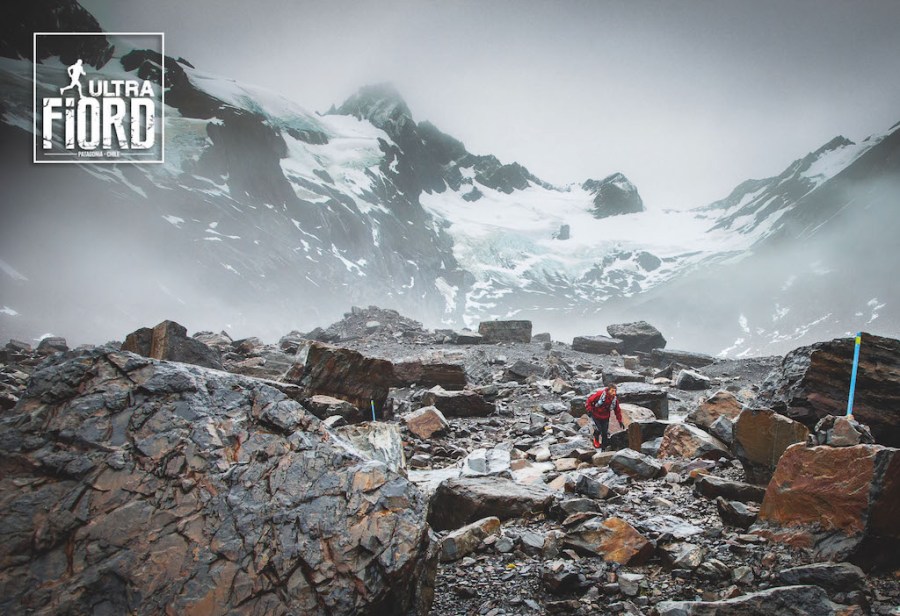 If you made a measuring stick for race toughness, you’d whittle it out of the dark woods at the end of the world where Ultra Fiord is held.

This race leads competitors through Patagonian puma territory, then up onto a glacier’s crevasse field, where rockfall and avalanches regularly rearrange the race course.

Some of the world’s best ultra runners have been emotionally broken by this race and unable to finish. In 2016, a competitor tragically froze to death on a windy and very exposed mountain section.

With huge winds whipping up in just minutes, and sunshine suddenly breaking through the heaviest snowstorms, you’ll come to understand the saying that to travel in Patagonia is to experience all fours seasons in just one day.

Before starting, take a huge pinch of salt from the Patagonian Fiords you’ll be running along. You’ll need it to season any expectations about finishing.

Distance: 34mi
Elevation: 11,811ft
Course record: New course for 2023
Did you know? The glacier ‘Chacabuco’ had no record of humans ever crossing it before it was tackled in the first edition of the race in 2015. 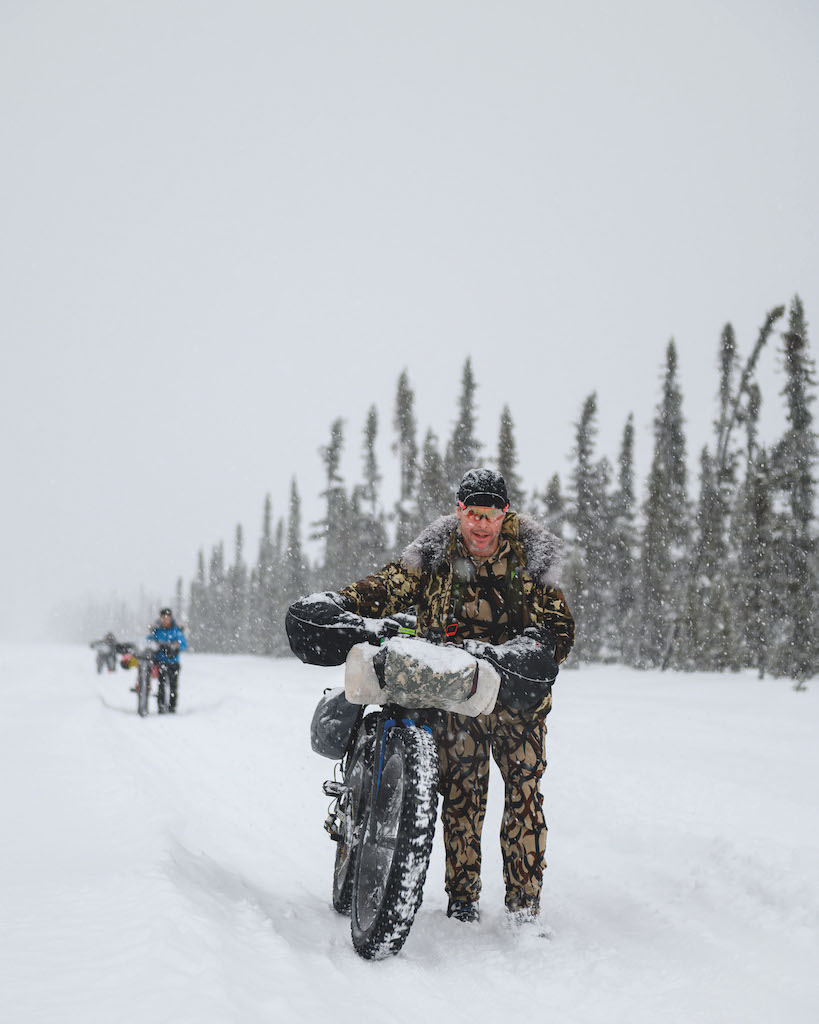 The absolute pinnacle of self-sufficient survival racing and toughness.

This 1,000-mile odyssey connects the city of Seward, in the extreme south of the state, with the city of Nome near the Bering Strait – and the USA’s ocean border with Russia.

Run in winter, racers traditionally used dog teams to complete this route, but it is now competed on fat bikes and also on foot.

All competitors must strategically post their personal resupplies to remote villages along the race route, or otherwise drag the weight on a sledge behind them. Lips can easily freeze together in temperatures that often fall below -40°C. 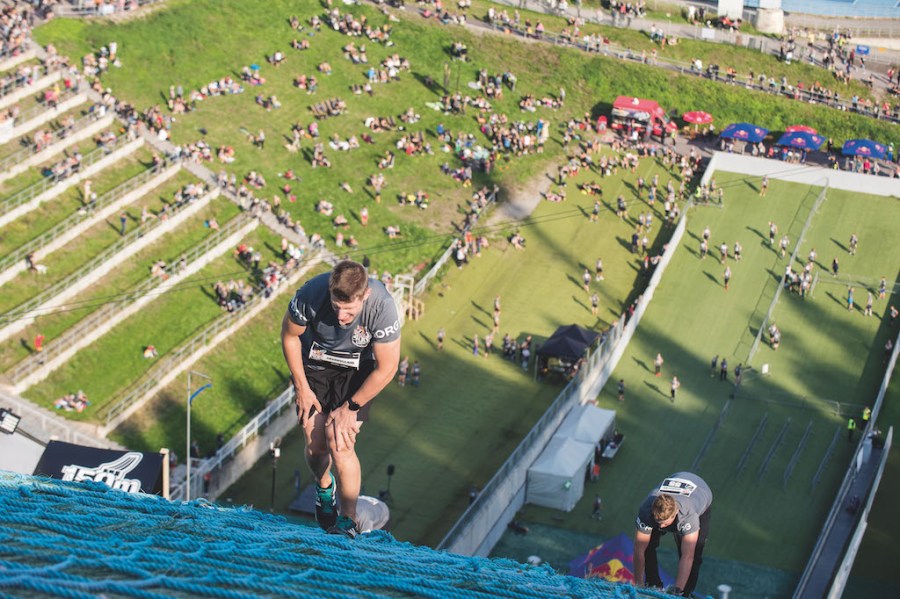 Running 400m flat-out is tough. But racing it on your hands and knees while gaining over half that distance in height at the same time is simply brutal.

The Red Bull 400 fires you the wrong way up the world’s largest ski-jump slopes, climbing from top to bottom for the equivalent of 60 stories.

With an average slope angle of more than 45%, the Slovenian race is the toughest of the Red Bull 400 International Series, and definitely not recommend for anyone with vertigo.

Sign up if a full blood transfusion with lactic acid is your idea of fun. 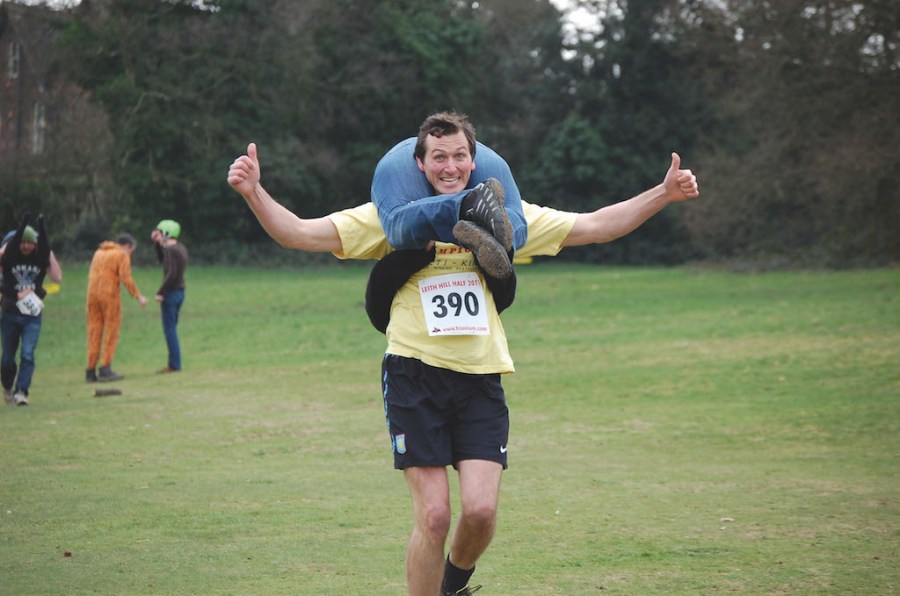 Indisputably the toughest quarter of a mile anywhere on the planet, this is the ideal race for the gym-goer who wants to put his lung capacity to the test.

The ‘wife’, who can be a man or woman, must be carried by the competitor for the entire course. Strategies for carrying the wife vary, from the classic fireman’s lift, to the recommended ‘Estonian Hold’ (the wife dangles upside down, facing the competitor’s back, their legs crossed in front of the man’s face), to the ungainly bridal carry.

The first half of the course involves a short ascent with a 60% grade, and competitors need to conserve energy here to avoid going jelly-legged on the downhill finish.

The race organisers warn of potential ‘slipped disk, broken legs, dislocations, neck and spinal damage, hernias…’ the list goes on. In true tough spirit they add, ‘but please don’t let this put you off.’

Distance: 0.24mi
Elevation: 50ft
Course record: Jonathan Schwochert, carrying Charlotte Xiong, 1 min 40 secs
Did you know? The winner of the race receives a barrel of local ale, and the first-placed British finishers win £250 towards expenses to compete in the World Wife Carrying Championships. 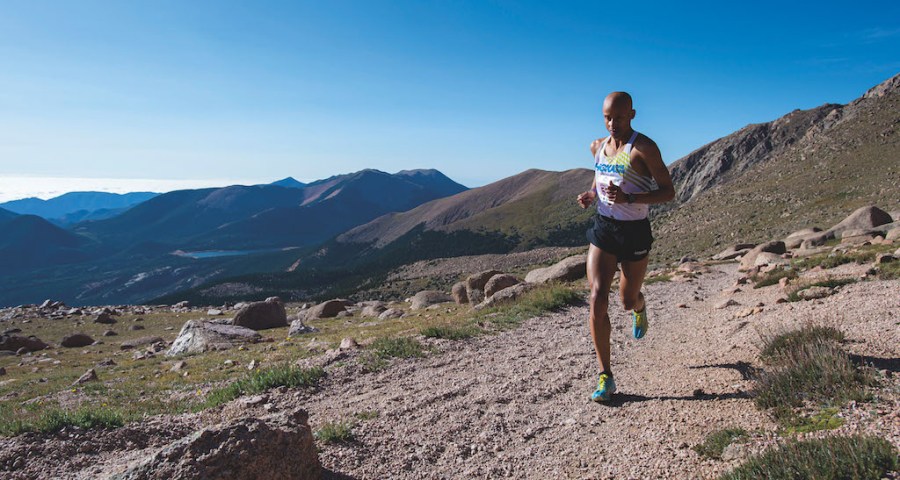 This brute of a mountain race is surely the toughest half marathon on the planet. Altitude sickness, lightning strikes and a 20°C temperature change from start to finish – this race has got it all.

Beginning at Manitous Springs City Hall at 6,300ft, competitors race into ever thinner air on the lung-puncturing climb to the 14,050ft summit of Pike’s Peak.

The average grade is 11%, but the worst is saved to last, with a final section of 32 switchbacks known as the ‘Golden Steps’, including groin-wincing step-ups of 15 inches.

Reached the summit and still feel energetic? Enroll yourself in the Pike’s Peak Marathon next year.

Race the entire climb, then kamikaze another half marathon back down past slower competitors to the start line.

Distance: 13.3mi
Elevation: 7,800ft
Course record: Matt Carpenter, 2 hrs 1 min 6 secs
Did you know? When Zebulon Pike, who the mountain would eventually be named after, first unsuccessfully tried to climb Pike’s Peak in deep snow in 1806, he famously declared no one would ever reach the summit. 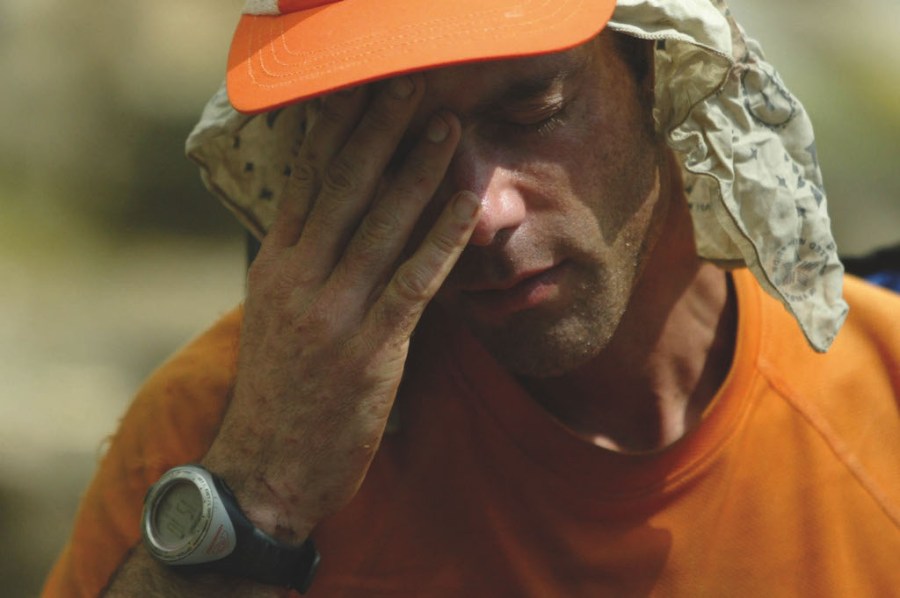 Where: Tennessee, USA
When: TBC (usually in April)
Entry cost: $1.60
No known website

When the assassin of Martin Luther King Jr. escaped from a remote prison, deep in the woods of Frozen Head State Park in 1975, he managed to run just eight miles before being captured.

Unimpressed by his athleticism, Gary Cantrell created the Barkley Marathons race to see just how far you could go in the 60 hours he was on the loose. The resulting course involves five laps of precipitously steep scrambling and off-trail bramble-bashing.

Competitors are required to collect the page numbers of books that correspond to their bib number at remote, unmanned checkpoints on each circuit. In the race’s 36-year history, just 18 runners have completed it.

Any year that a competitor completes the course, the route is made harder. Barkley is the last word in the understated and stoic world of ultra-distance mountain running.

Distance: 125mi(ish)
Elevation: 60,000ft(ish)
Course record: Brett Maune, 52 hrs 3 mins 8 secs
Did you know? The entry process is cryptic. Any competitor who cracks it, and is subsequently accepted, must pay $1.60, and present a number plate from their home state or country as part of the entry fee. 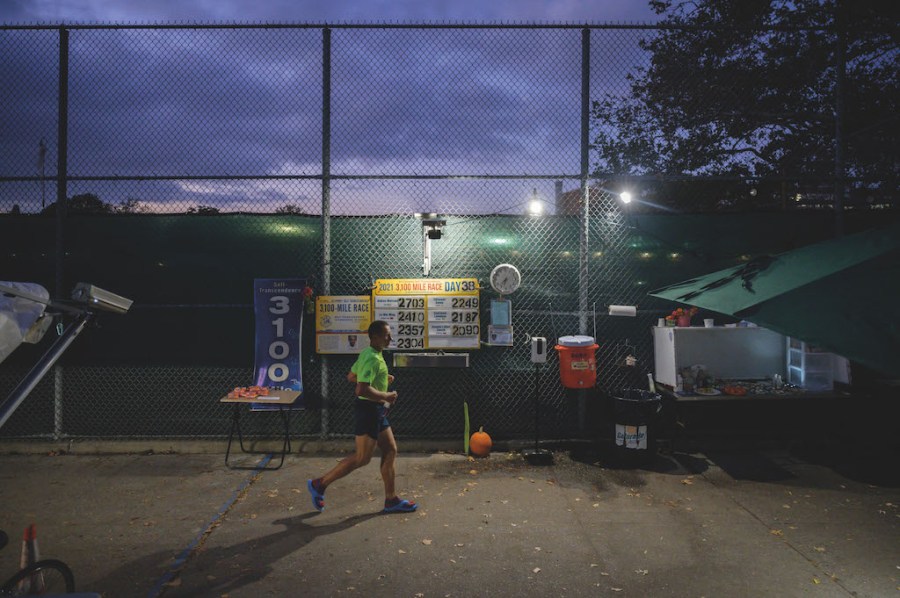 On the face of it, it’s doable. Run a half-mile lap of a city block in Queen’s New York and return to the start. Except, once you’ve done that lap, there are another 5,648 to go.

Known as the race that’s so long you need a haircut in the middle of it, only 52 people have ever managed to complete it.

Competitors are permitted to run all day, from 6am to midnight, before tending to their feet, scoffing as many calories as possible and grabbing a few hours’ sleep before starting all over again.

Started by its namesake, the spiritual leader Sri Chinmoy, the race is considered a pilgrimage, with the goal to discover the possibilities of the mind as much as the body.

Distance: 3,100mi
Elevation: 90,368ft (16ft per lap)
Course record: Ashprihanal Pekka, 40 days 9 hrs 6 mins 21 secs
Did you know? The roads are not closed and runners must share the pavement with pedestrians, school children and the city at large. 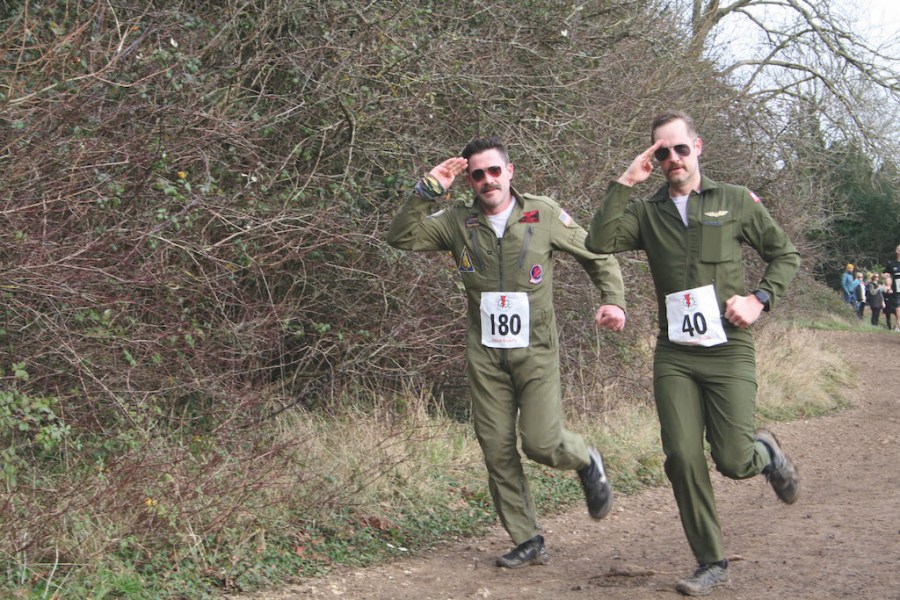 On the toughest day of the year (for getting out of bed early), the Knacker Cracker 10K is relentlessly held on 1 January each year on Box Hill.

The race squeezes in as much climbing as you can possibly imagine for a 10k race this side of the Alps. The route actively seeks out muddy grass and stony tracks.

Fancy dress is almost universally observed (rumour has it some competitors come straight from last night’s celebrations). But don’t be fooled: the fastest times are blisteringly quick over such torturous terrain. 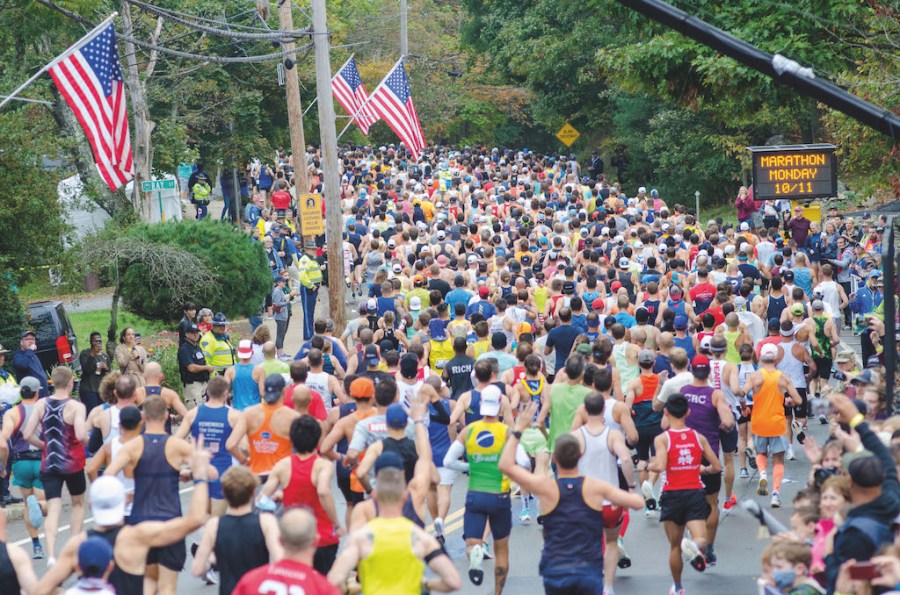 Want to compete with the world’s biggest pack of high-performance marathon runners? Boston is the race for you.

Just getting to a standard where you are able to register is super tough. To pound the streets at this iconic event, you’ll need a qualifying time of three hours for the marathon, if aged 18-34.

The time limit increases by five minutes for every successive five-year age bracket. Weather can be brutal in April on the Atlantic coast, with 2013’s competitors racing through storm winds and rain.

Still have hope for a fast new PB? Put it on ice until Heartbreak Hill at mile 20, then reassess.

Distance: 26.2mi
Elevation: 490ft
Course record: Geoffrey Mutai, 2 hrs 3 mins 2 secs
Did you know? Heartbreak Hill got its name in the 1936 race, when leader Ellison Brown slowed down and was overtaken on the climb by Johnny Kelley, who patted him on the back as he passed. Brown, infuriated, clawed back his lead and won. 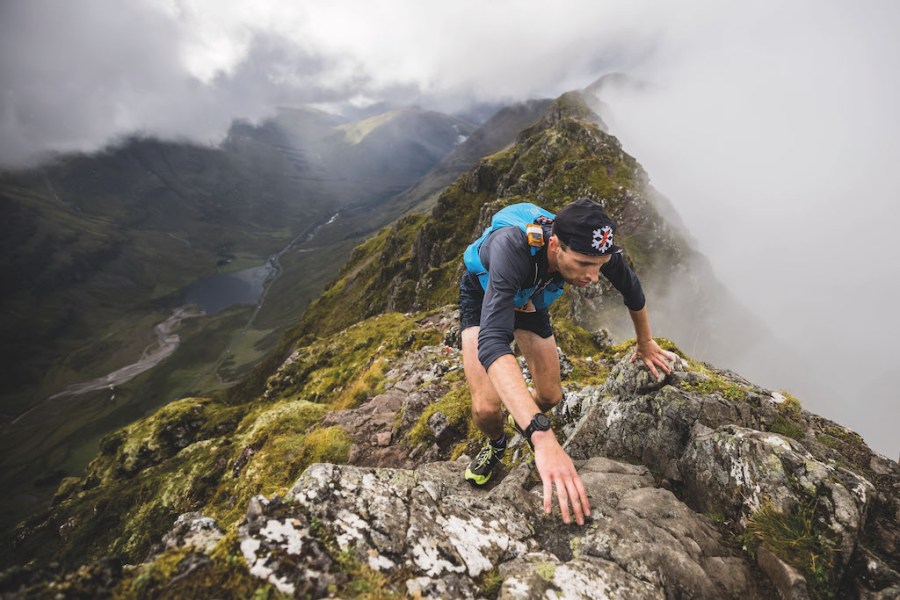 Is it a scramble? Is it a rock climb? Is it a run? Well, all three actually. Another race with a stringent entry criteria, the event organisers ask for your climbing CV as standard practice.

Along the route you’re likely to pass actual rock climbers using ropes on terrain you’re required to solo. The course profile looks like a seismograph and you’ll need tree-trunk-strong legs to withstand the rattling descent over loose scree, boulder fields and Scottish bogs.

Emergency medial cover is included in your race pack, but once commited on the most serious climbs of Curved Ridge and Aonach Eagach, there is no escape route and you’ll just have to tough it out.

‘Be under no illusions,’ the race website warns, ‘a slip or trip on these serious sections of the route could result in death.’ 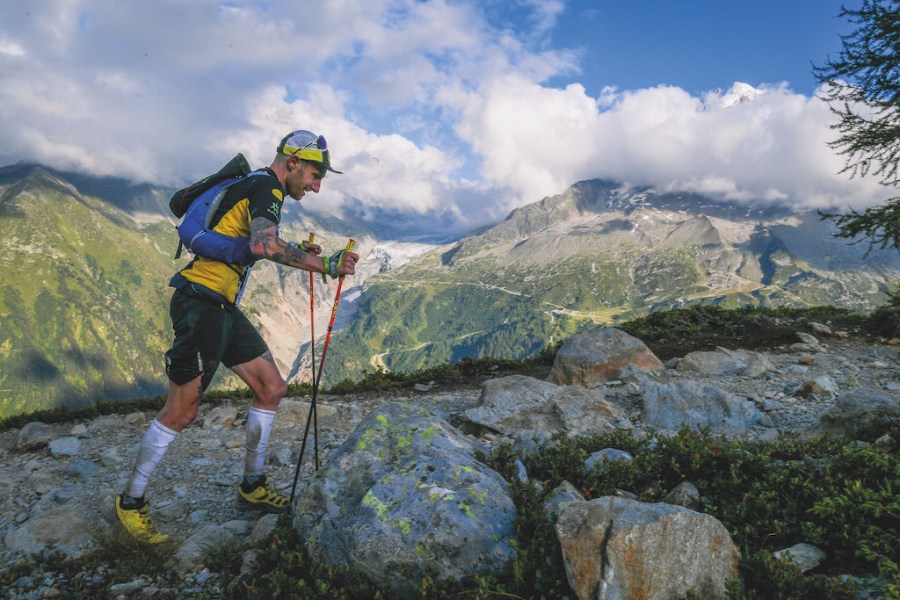 Take Europe’s biggest mountain, then run an Alpine loop around it for over a hundred miles through France, Italy, Switzerland, then back home to France again.

Referred to simply as UTMB by people in the know, most hikers take ten days to complete this quad-grinding circuit around the Mont Blanc Massif.

UTMB runners starting early on the Saturday afternoon, however, have a little less than 48 hours to close the loop to the start finish line in Chamonix by late Monday tea time.

Think of all the pomp, crowds and Alpine horns of the Tour de France fortnight, but with the action packed into a single sleep-defying quadruple marathon – with plenty of charcuterie at the aid stations.

Distance: 106mi
Elevation: 32,808ft
Course record: Francois D’Haene, 19 hrs 1 min 32 secs
Did you know? While D’Haene holds the overall record, female athlete Courtney Dauwalter’s 22:30:54 run at the 2021 event is considered by many to be the most spectacular UTMB run ever. She placed seventh overall, coming home over 1.5 hours faster than the second-placed woman. 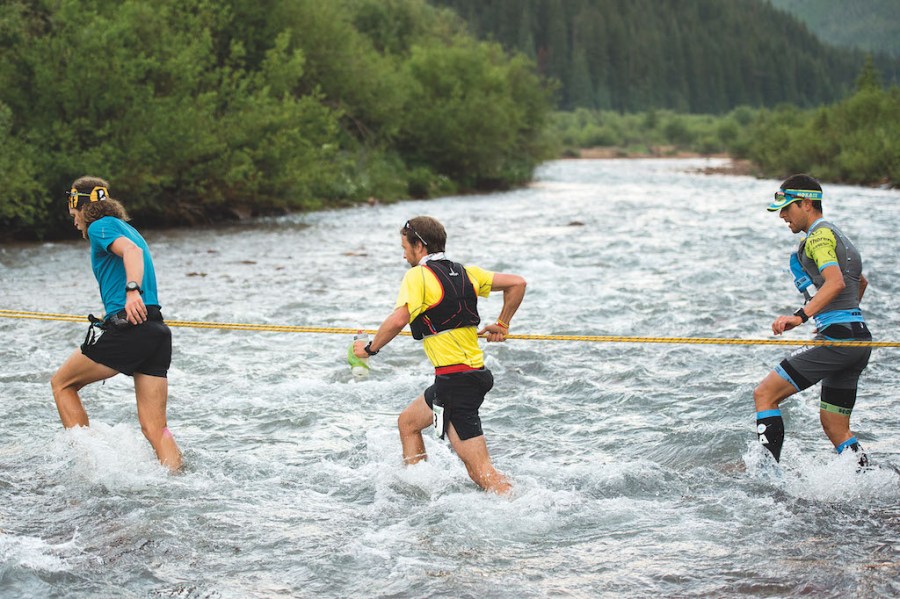 For many ultra-distance runners, the Hardrock 100 is the last word in toughness. Despite this US race being remoter and higher than any in Europe, there is no compulsory kit list.

In 2017, Adam Campbell was struck by lightning on this section, but continued on to a third-place finish. Glissading – skidding down precipitous snow slopes in trail shoes – is an essential skill. So too is drinking: a sneaky shot of liquor is proffered to racers at mountain passes.

Kissing the Hardrock stone – a painted rock featuring a ram’s head at the finish in Silverton – is the mandatory celebration.

Distance: 100mi
Elevation: 33,050ft
Course record: Francois D’Haene, 21 hrs 45 mins 50 secs
Did you know? The race allows you to pick up a ‘pacer’ in the later stages. Your pacer can run alongside you, providing emotional support, but is prohibited from providing you with food, water and definitely no piggy backs.