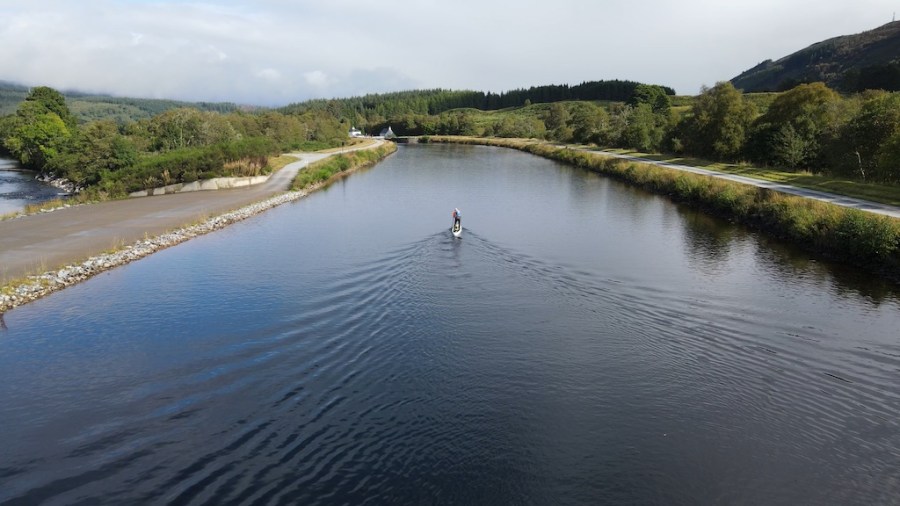 The tourists milling round the ruined ramparts of Urquhart Castle don’t quite know what to make of us. It’s still morning, I think, and the sky has darkened to charcoal, turning the waters of Loch Ness an ominous steely grey. The wind has picked up in the last hour or so and is now barrelling down the lake. We file past in a line of luminous yellow race-bibs, eyes front, plunging our paddles into the growing swell.

We’re 25km into day two of the Great Glen Challenge. Starting in Fort William on the west coast, the route runs for 92km across Scotland, following the Caledonian Canal and traversing several lochs before finishing up in Inverness on the east. Along the way, you paddle through some of the most magnificent scenery the Scottish Highlands have to offer. On Loch Ness, wisps of cotton-budded mist drape the surface at first light and strands of Caledonian firs march proudly over the mountains on either side.

But all this escapes me as I cross the expanse of water that eddies into Drumnadrochit Harbour on the other side of Urquhart Castle – I’m exhausted and my right calf is starting to cramp up. A wave surges beneath me, flipping my board and hurling me into the water. I can drag myself back on, but my calf’s too painful to stand; so I start paddling on my knees, trying to stretch it off between each rise and fall. There’s still 23km to go. 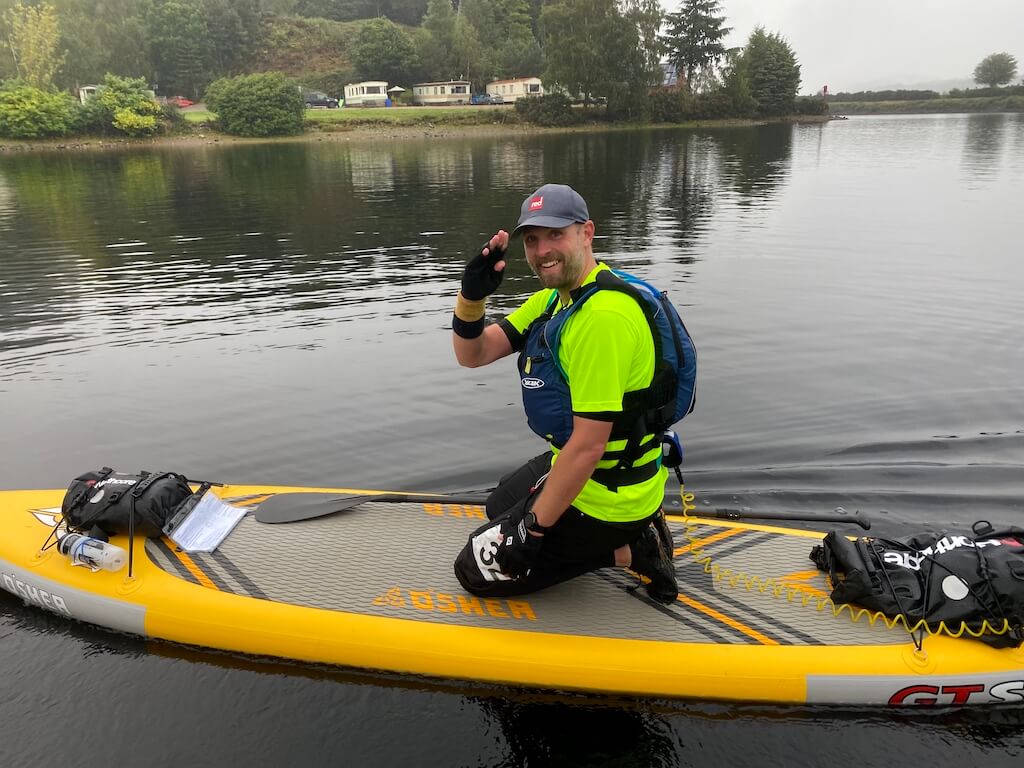 Rewind eight months to January 2021. My New Year’s resolution is to take up stand-up paddleboarding – SUP for short – the fastest-growing watersport in the world. But I don’t just want to laze along a river occasionally. I want to properly get into paddleboarding, and to do that I need a goal to work towards. Something that will force me to get out onto the water, even in the coldest months. Something like the Great Glen Challenge.

Part of the UK Paddle Endurance Series, the Great Glen is an epic event in an iconic part of the world. It requires skill and stamina, involves elements of flat-water racing (on canals) and down-winding (on lochs), and pits you not against your fellow competitors but against the clock and, ultimately – like all good ultra-endurance events – yourself. In short, it’s a considerable feat for experienced paddlers, let alone someone who has barely stepped foot on a paddleboard. Or who doesn’t even own one for that matter.

Most SUP beginners opt for a 10’ 6” all-round board, but for a long-distance event like the Great Glen I was going to need something bigger. So, seeking advice from instructors, stockists, and paddlers who had completed the event before, I settled on the O’Shea GTS, which at 12’ 6” long and 32” wide would offer me the perfect balance of stability and glide. Its large volume meant it could handle the dry bags I would need to carry, but it was also super light for its size – handy, given that I’d be portaging several hundred metres around locks at various points in the race. The paddle itself is equally important, so I went for O’Shea’s 70 per cent carbon three-piece: light, stiff and easy to pack down.

All the gear, no idea? Pretty much. So I booked a lesson with The New Forest Paddle Sport Company to work through the basics on their two-hour BSUPA Ready to Ride course, which covers paddling technique, different types of turns and how to self-rescue. Training itself was a two-pronged attack: mastering technique and building up strength and endurance. Every time I went out on my board, I tried to make my paddle stroke that little bit more efficient – to catch the blade further down the nose, to make less splash, to take more strokes before having to switch sides. Endurance would come with the work I was putting in on the water, so gym time was focused on strengthening my shoulders and triceps, my quads and my calves, and perfecting my hip hinge, which would help propel my board forward while protecting my lower back – a historical weak spot.

Out on the water, I tried to match the kind of conditions I would encounter up in Scotland as best I could. I focused most of my paddling on the Basingstoke Canal, my local version of the Caledonian, and added occasional trips to a loch-like lake or the sea. I went out in all weathers, sometimes purposefully picking a windy day so I could get used to paddling in choppy water, and mixed interval training with increasingly longer-distance paddles.

I was threatened by a man with a rifle for taking the wrong fork up a river and got attacked by a swan. Twice. But I also paddled under pinky skies where the only sound around was my blade swishing through the water. I learned how the landscape of an estuary changes on the ebb tide and how a river’s flow alters after rainfall. And I saw herons and kingfishers and water voles and deer, and was once kept company for several kilometres by a playful seal.

And so by mid-September, as I waited in the early morning half-light at the start line of the Great Glen, I felt like I was almost ready. 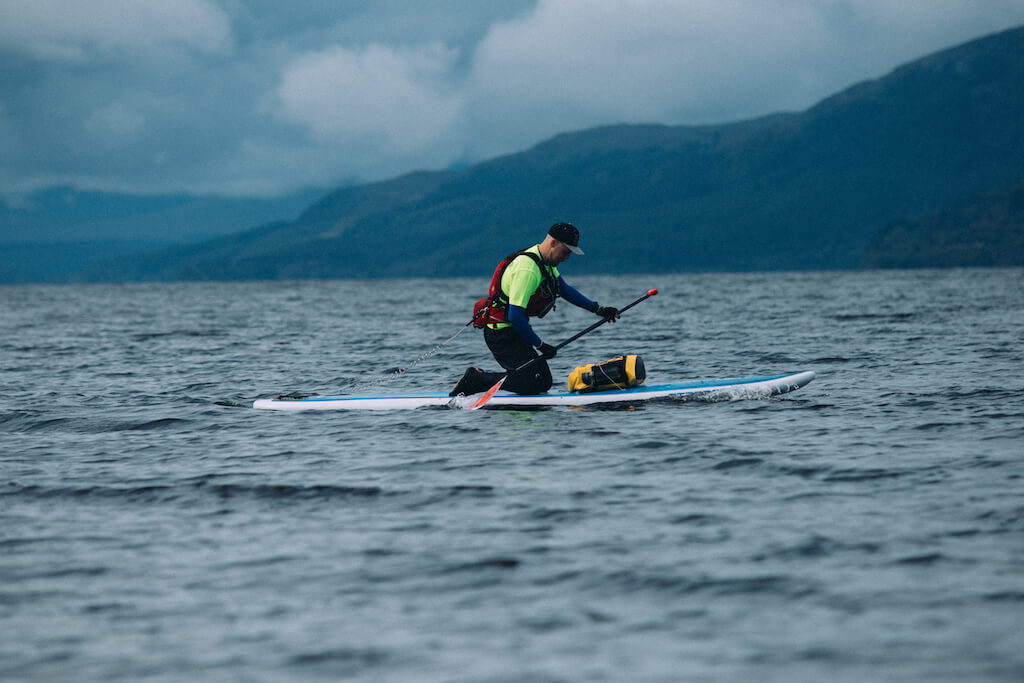 A paddler takes a breather on a gloomy Loch Ness | Photography: Craig Sawyer

We set off from Fort William in a flurry of nervous strokes, the volunteer marshalls calling out encouragement as we disappear round the bend. I settle into an early rhythm, and after ten minutes or so, my watch beeps – 1km down, 91 to go. We’re still in quite a tight group as we cut along the canal, and I exchange smiles with the paddlers around me. Somebody jokes that if we’re still with him at the end then we’d have had a “bloody awful” race.

I make the first checkpoint at Gairlochy well inside the cut-off time and set out onto Loch Lochy. The loch is prone to waves in high wind, but it’s deliciously torpid, and it’s hard to see on the horizon where the sky ends and its reflection in the lake begins. The first of the hard boarders start to pass me, and I fall in for a while with Hayley and Natalie from Weymouth and their paddle buddy Dylan as we drift under the shadow of Meall na Teanga, a towering munro whose slopes are washed with sun.

My support team are waiting at Letter Finlay, a pull-out point half-way down the loch, but I’m doing fine and so push on for the pit-stop at Laggan Locks. Just 17km to go now until the end of day one. The canal here is stunning, with jet-black water and trees on either side that frame a majestic mountain dead ahead. Loch Oich comes and goes. It’s like a millpond, and a couple of boys charge along its shoreside pontoon, taking flying leaps off the end and into the water. At Fort Augustus, I fall onto the jetty, knees creaking.

Day two begins with a race briefing at 6.40am and a wee dram of whiskey. “Be ready for Loch Ness,” the organisers had warned us. I am, ish, but its size and scale still frighten me: it’s 36km long and contains more water than all of the lakes in England and Wales combined. In the pre-race Zoom call the weekend before, the talk had been of windspeeds and water temperature, safety leashes and tracking devices, and the number to ring if you needed to call the RNLI out. There are no checkpoints, so the pockets on my PFD are stuffed with protein balls and bags of nuts. 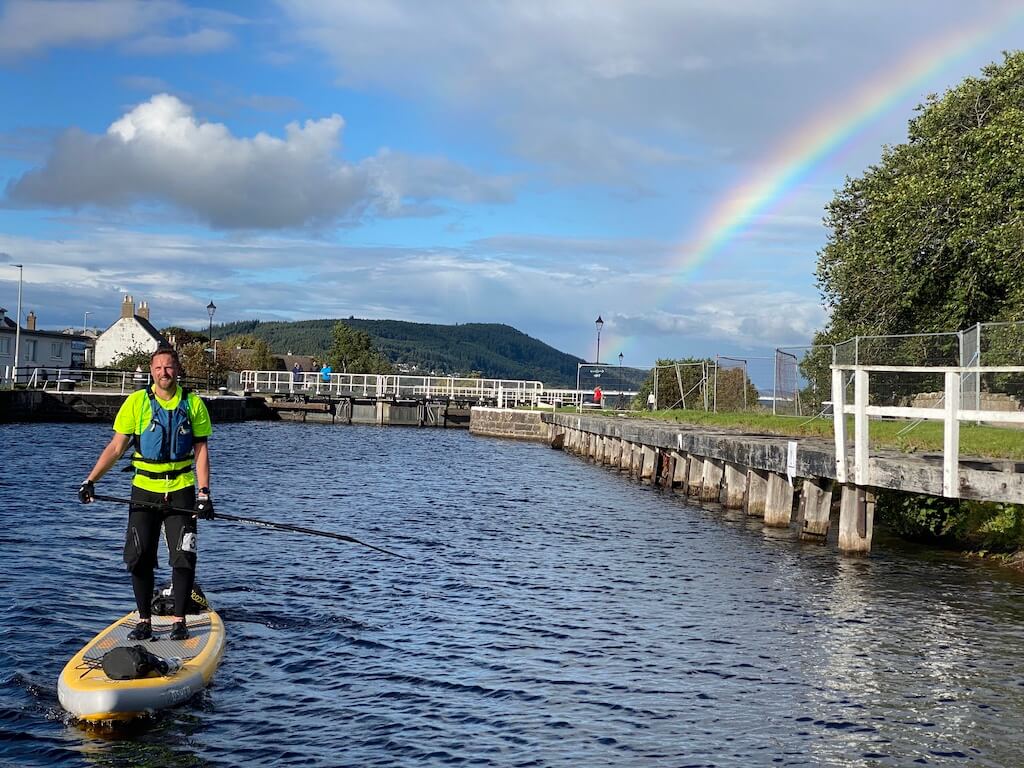 For most of the time I can’t see the other end of the loch, so I hug its western shore, close enough to make a quick exit if needed. Five hours in, the darkening clouds gather as we pass Urquhart Castle. I fall in with Vanessa, Georgie and Elizabeth, three paddlers from the Wirral. Safety in numbers. But then my calf goes, and I start wondering if I’m going to make the finish line.

We drift down Loch Ness on our knees for the next 5km. Elizabeth gets tumbled and loses her paddle. Her support team is at hand, clambering down the slope with a new one, and we’re off again. The sun comes out. The stretching I’ve been doing has worked and my calf feels good again – I’m back on my feet and actually surfing the waves on the last couple of kilometres. It’s exhilarating.

Two more lochs to portage and then a gentle paddle into Inverness. I’ve racked up 27,000 strokes. A rainbow is arcing over the finish line, and there’s talk of signing up for next year’s event already.

How to get good at SUP

The Great Glen Challenge 2022 will take place on 17-18 September. Sign up at paddlefast.co.uk