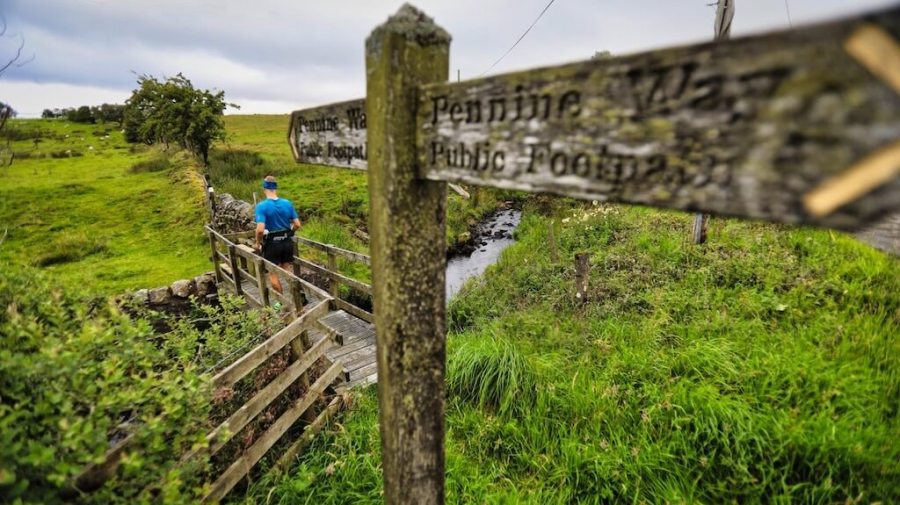 If you took to running over lockdown, maybe you clocked a 5 or 10k time you’re particularly proud of. In four whole months of accumulated running, however, most of us still wouldn’t have come close to the 260-mile record set by ultra runner Damian Hall late last month.

The 44-year-old broke the Pennine Way Fastest Known Time (FKT) by covering the mammoth distance in 61 hours and 35 minutes. To put that into context, hikers tend to 16-19 days to walk the length of the National Trail, which twists its way from Kirk Yetholm in the Scottish Borders to Edale, Derbyshire.

If that’s not impressive enough, Hall also amassed more ascent than the height of Mount Everest, collected all the litter he came across, and did it all on a grand total of 45 minutes’ sleep… 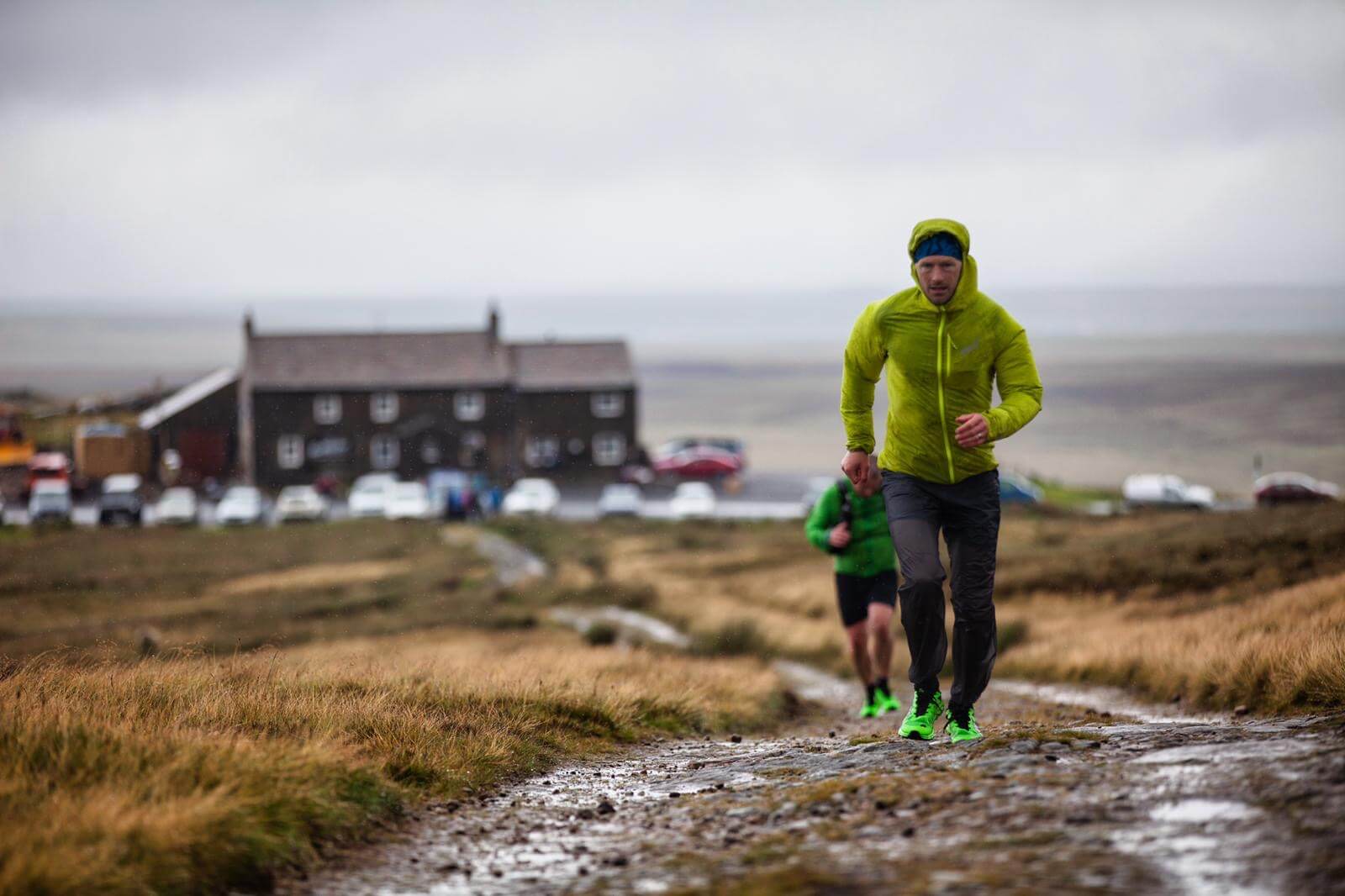 How long was this attempt in the pipeline?

“In a way nine years, because that’s when I first walked the Pennine Way. I wrote a guidebook after that walk and I remember including the previous FKT record – Mike Hartley’s 2 days 17 hours in 1989 – and thinking, wow! I wasn’t a runner at that time, or at least I didn’t consider myself a runner, and I remember thinking that time was absolutely bonkers.

“But then over the years I got more into trail and ultra running, my horizons broadened slightly and my mind opened to what I might be able to achieve. Then in 2016 I ran an FKT on the South West Coast Path, and after that it was very much a case of, ‘Right what’s next? I want to do more of these!’

“The Pennine Way record was definitely on my radar, but I was very intimidated by it – not the distance so much as the time. When something stands for 31 years you know it’s pretty good. But I was sitting on the idea for a few years, kept putting it off, and then lockdown came along and removed all distractions. I had no excuses any more and decided it had to be done.”

How gruelling was your training leading up to it?

“I did most of my training in the Wiltshire Cotswolds, where I live. To be honest it was quite relaxed, because during lockdown running felt like a bit of a privilege. So there was a lot of running just for the pure love of running. As lockdown eased, I still couldn’t get to the Brecon Beacons where I normally train, but I could get to the Mendips [the Mendip Hills, Somerset], which aren’t quite on the level of the Pennines but it was something.

“Towards the end of my training when we were allowed to travel a bit more I did go up to the Pennines three times. I should say that I’ve done The Spine Race [a 268-mile race from Edale, England, to Kirk Yetholm, Scotland] twice, so I know the Pennine Way fairly well.

“But in terms of miles and volume of training, I wasn’t doing the crazy mileage I have done in the past. I was averaging 70-75 miles a week, which isn’t the crazy amounts some ultra runners do.” 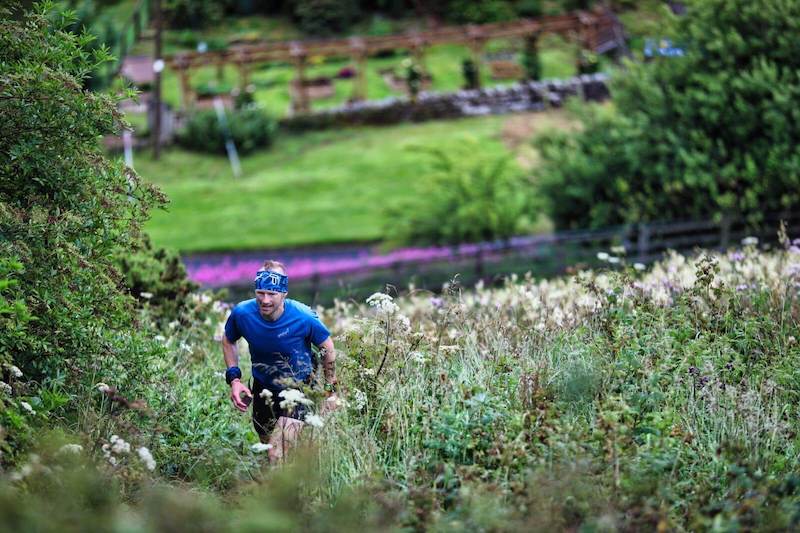 Your attempt was just one week after John Kelly broke the record that had stood for 31 years – was that cause for hope or intimidation for you?

“John is a friend of mine and we were discussing it together quite a lot. We even discussed setting off at the same time, but we couldn’t quite get the dates to work. Obviously I followed his run with a lot of interest and even though he broke the record it filled me with a lot of optimism, because he had quite a tough time of it.

“Less things went well for him than I experienced – he had a lot of stomach problems and so on – but he still broke the record by 34 minutes, which showed me the record was beatable even on a bad day.

“When something stands for 31 years you’re tempted to think, blimey this is never going to be beaten, but John showed it could be done. I figured if I had less trouble than John experienced, maybe I could beat it too.”

What sort of terrain is the Pennine Way?

“Bogs! It’s a lot of moorland and those moors are like plateaus, they’re not like the fells of the Lake District that drain away quite well. That means it gets boggy when it rains and it stays boggy.

“It’s pretty rocky in places, too, and the overall ascent exceeds the height of Mount Everest. So it’s challenging terrain, and pretty slow going at times.” 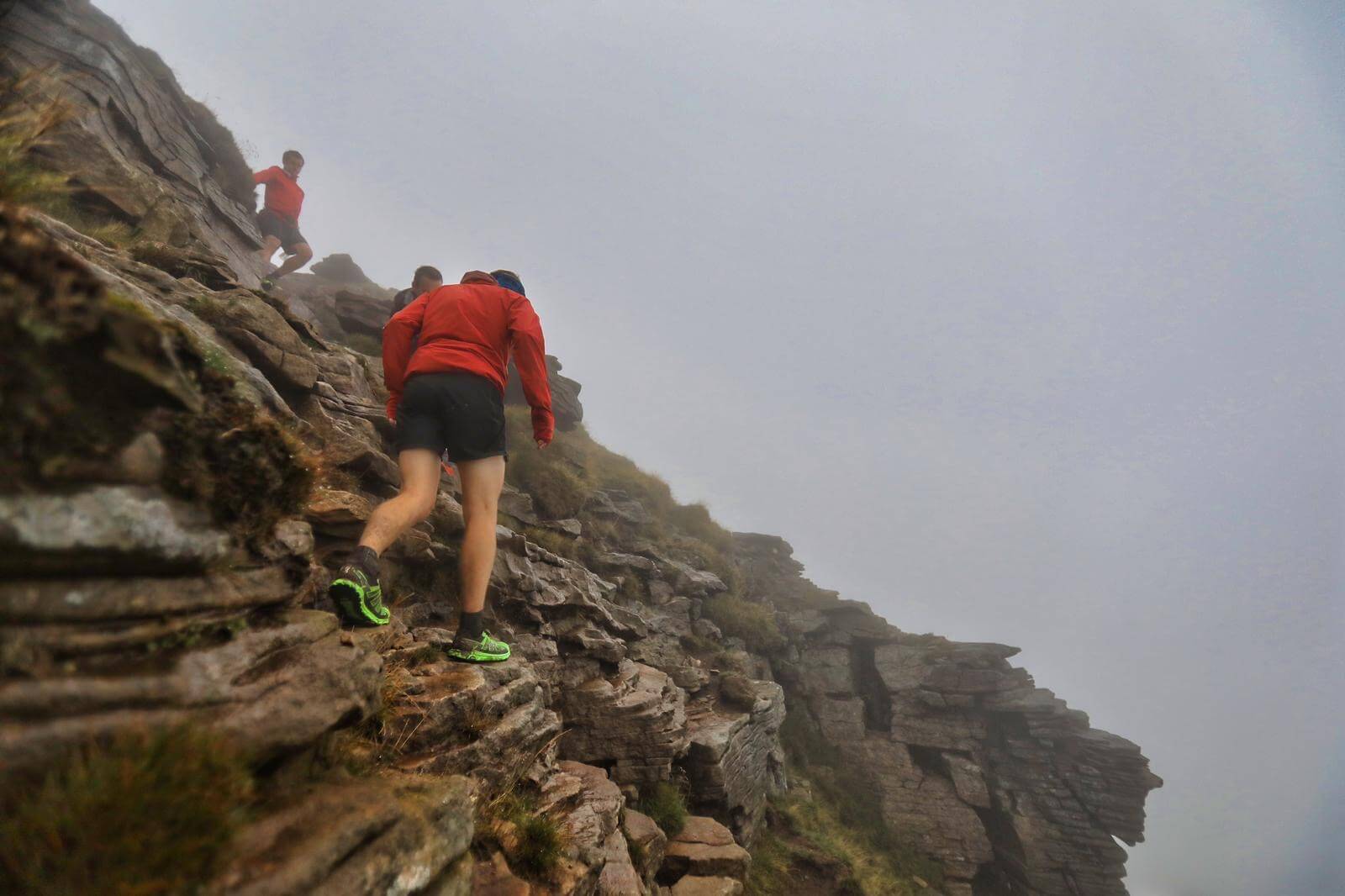 Hall navigates a precarious section of the Pennine Way

What sort physical and mental battles did you have to overcome?

“If I’m honest there wasn’t too much physical discomfort, partly because my body is quite used to doing this sort of thing now and I prepared well with my coach David Roach. The biggest challenge was that sleep deprivation – I got about 45 minutes in total and that was the thing slowing me down.

“The other obstacle was simply getting enough calories in and, oddly, brushing my teeth. I was determined to brush my teeth at the normal times of day, but I failed to tell my crew where my tooth brush wash, which meant I only ending up cleaning my teeth right at the end.

“Obviously that’s pretty disgusting, but also after that amount of time with the build-up of saliva and sugary food etc. your mouth starts to feel really disgusting and it puts you off eating altogether. That’s not ideal, because you need to keep getting those calories in.

“I managed to deal with the mental challenges fairly well, because I worked with a sports psychologist leading up to the run. She advised me to think of my ‘why’ – why am I doing this? – and to make visual reminders of it, so I got a permanent marker and put ‘FFF’ on my arm.

“That could mean three swear words when things go badly, but mainly it stood for Family (do it for my kids to make them proud), Friends (the whole support team and road crew around me), Future (concerns about our climate emergency). I had those three things to keep me going when all I wanted to do was sit down and cry!” 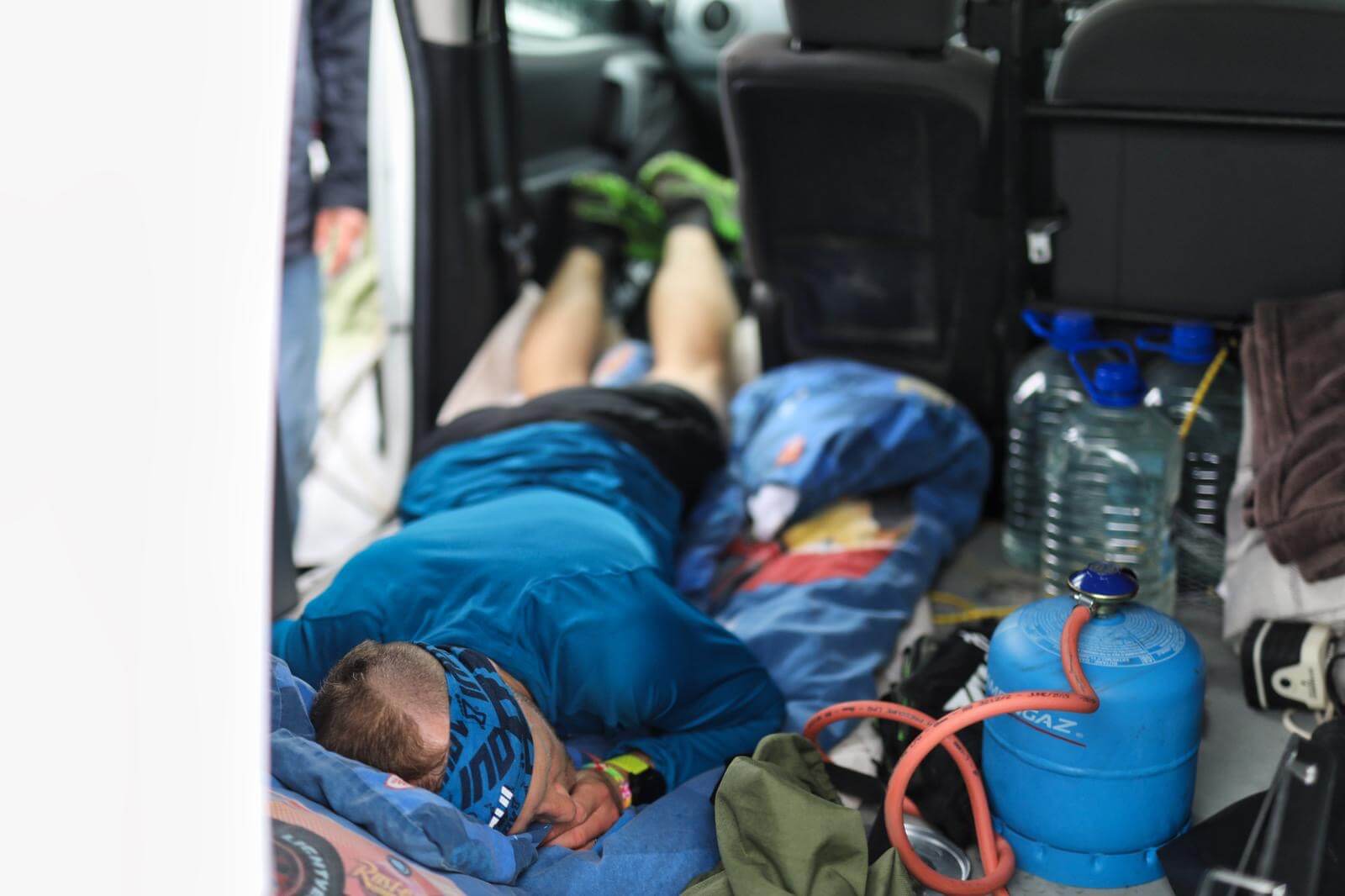 How did you keep your energy up for the 61 hours?

“For ‘shorter’ races of 50 miles or less I tend to stick to simple sugars, but for this it was much more real-food-based. You need those fats and proteins to keep your body from completely breaking down. But it’s still surprising what you do and don’t want, and as much as you try it’s impossible to get enough calories in.

“I started off with the classic bananas and flapjacks, and my crew bought me chips a couple of times, which was nice. Towards the end it was easier to stomach liquid calories, so soups and a hell of a lot of tea. At one point I wasn’t really eating enough and someone brought me a hummus and avocado sandwich. That absolutely flew down and from then on I was requesting those at every turn. It’s a very middle class nutrition strategy!

“The other thing that made the whole nutrition side of things more complicated was that I did it without any animal products or plastic waste, so that took a lot of research. There are five or six companies out there doing compostable wrappers and so on, so we got round it in the end, and it was gratifying doing it that way.”

What were the overriding emotions when you arrived in Edale?

“There were 50 or 60 people there to greet me, which I wasn’t expecting at all. It was amazing actually. I timed it just right, too, so that I made it just before last orders at the local pub. Someone kindly bought me a pint and that tasted pretty good.” 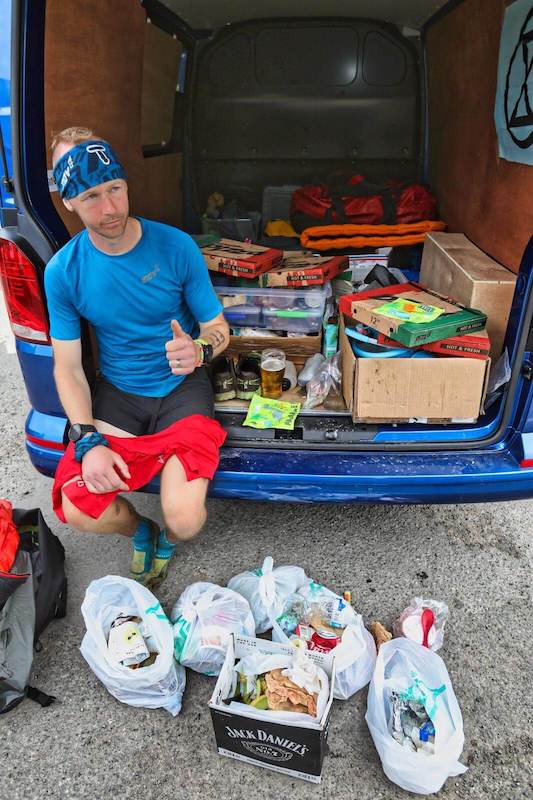 Where does this rank in terms of your best running achievements?

“I think this and the fifth-placed UTMB finish [in 2018] are the two things I’m most chuffed with. It’s overwhelming really, and it may well be the greatest thing I’ve done in running terms. I don’t want to sound too smug, but I am sat here feeling very satisfied.”

This attempt was certified as ‘carbon negative’ – what does that mean?

“I’ve been audited for the year by a company that worked out the amount of carbon I used last year and gave me a much more aggressive ‘budget’ for this year. Lockdown made hitting those targets a fair amount easier, but I phoned them up and told them my plans for this run and they said it comfortably fitted within.

“The actual act of eliminating plastic waste didn’t affect things too much – and actually, if I’m honest, I probably encouraged a load of car journeys that wouldn’t have happened otherwise – but this challenge will slot into my attempt to be carbon negative over the course of the year.” 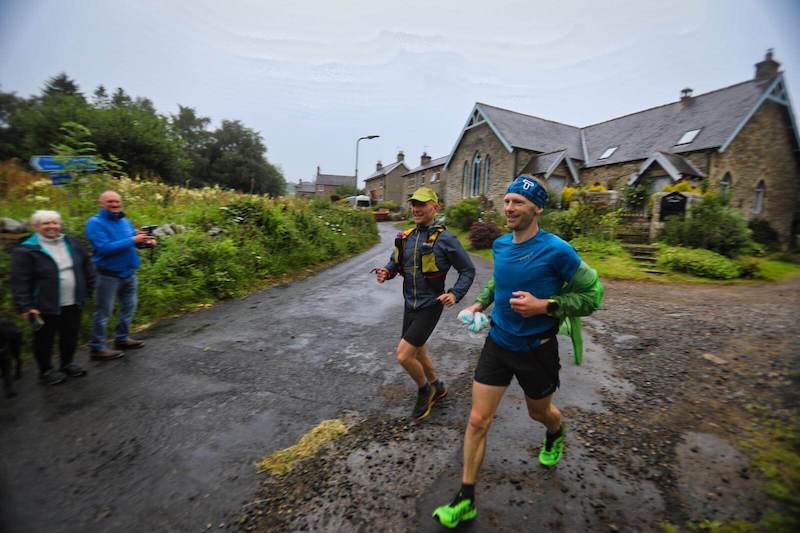 How did the new inov8 TERRAULTRA stand up to the test?

“They were fantastic. They have a responsive squish to the midsole, which I don’t necessarily look for in a shoe, but if you’re doing 260 miles you need a bit of extra cushioning.

“Like I said, it was very mixed terrain and it takes a really good shoe to stand up to that, but I had no real foot issues at all, which is all you want as an ultra runner.” 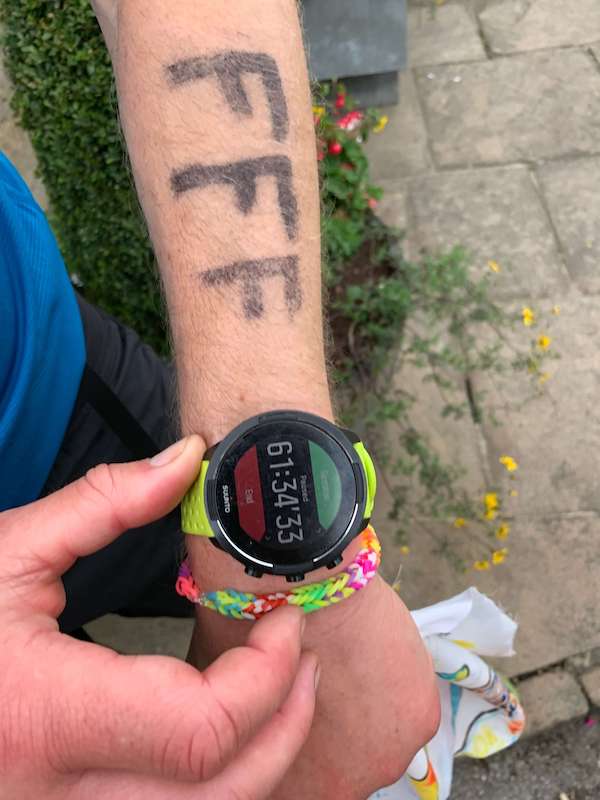 1. Pick terrain that excites you.
“Some people really like the lumpy stuff – like the Lake District or the Brecon Beacons – but bear in mind that one mile there is going to take you much longer than a mile elsewhere.

“Other people really like coastal running, and there are even ultra marathons along canals. So think about the terrain you like and focus on that.”

2. Stick to real food.
“For a marathon, gels can be just the job, but if you’re out for a lot longer you need to think about real food, and that can be anything and everything you can stomach.

“I eat quite a lot of chocolate to be honest, but people fuel on all sorts of strange things. Try what works for you and treat it like a fun picnic.”

3. Comfort is key.
“You want a pair of shoes you can trust, and really it’s about comfort above all else. A good running pack, some navigation – I would encourage people to carry a map as well as their phone – and maybe some headwear for the sun is really all you need.” 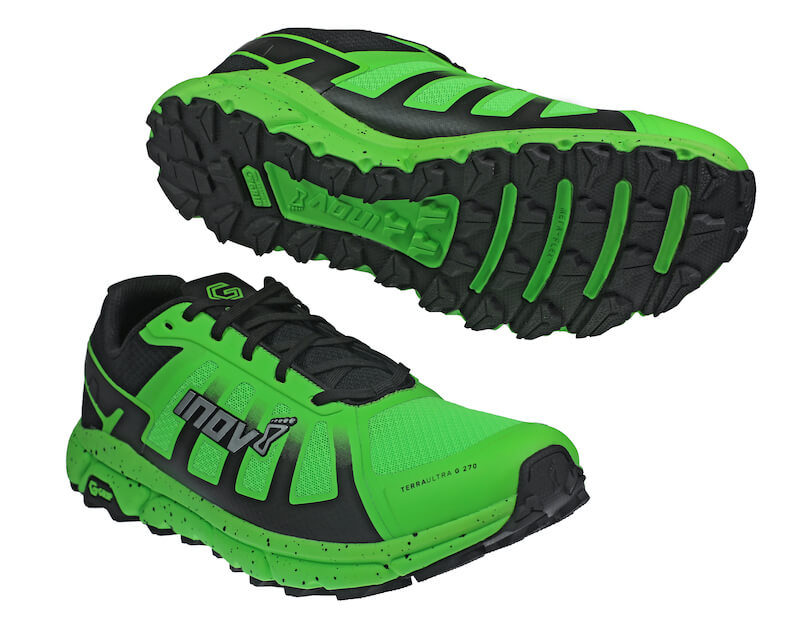 The new inov8 TERRAULTRA G 270 features an improved use of the brand’s pioneering Graphene-Grip rubber, a new plush cushioning foam that delivers greater energy return for longer, and an adaptable upper fit that adjusts to the needs of your feet.