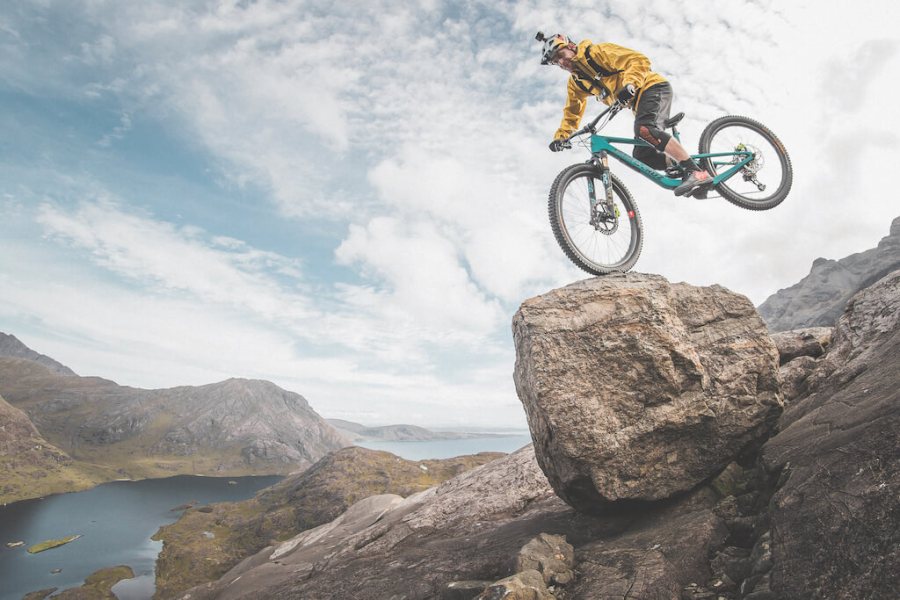 The grippy, volcanic rock of the Dubh Slabs on the Isle of Skye makes for some fine climbing.

But trials rider and YouTube sensation Danny MacAskill isn’t satisfied with going up; in January, his latest viral video involved riding straight down the graded climbing routes (you can scroll down to watch it). And yes, it’s as crazy as it sounds.

While the rest of us are unlikely to ride down 900m of near-vertical rock (to avoid confusion, please do not do that), the techniques MacAskill used to stay in control and avoid a bike- and bone-destroying fall to the bottom of the crag are open to all of us.

MF caught up with him to see what lessons you can take away to improve your own skills and confidence on a mountain bike – wherever you ride. 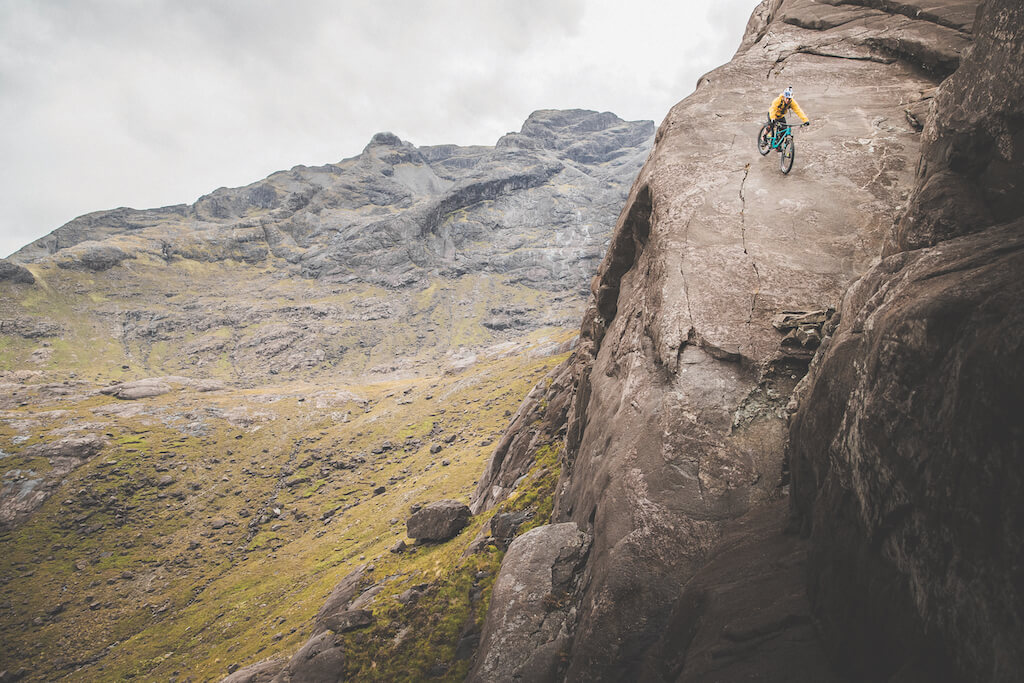 The feature of your bike that gives you the most control is, unsurprisingly, your brakes. “When you’re on the slabs you really feel gravity just trying to pull on you,” says MacAskill, “so the key is to try to keep things under control at all times.”

In 2021, any decent mountain bike is going to have powerful hydraulic brakes that require, at most, two fingers on the levers to operate.

That means you can cover them at all times, constantly feathering them for fine control, rather than slamming them on full.

MacAskill says braking can be the thing that takes the longest time to learn – particularly the front brake, which does most of the work. That’s especially true on the steep, where all of your weight is leaning forward.

“Avoid locking the front brake,” he says, “because that is either going to send you over the bars, or wash the front wheel out – neither of those are ideal.

“And with the back brake I’m trying not to skid too much, because skidding is like an anti-lock braking system where you’ve reached the limit of the grip on the tyre.

“You’re feathering right on the edge of skidding, and I do the same on trails: not skidding and trying to avoid locking the back brake into corners.

“If you feather your back brake without locking it,” MacAskill continues, “you can sometimes use it to turn tight corners by getting it to step out on you, like a rally driver.

“When you’re dragging the back brake it’s going like a dart so it can sometimes keep you going straight, too.” 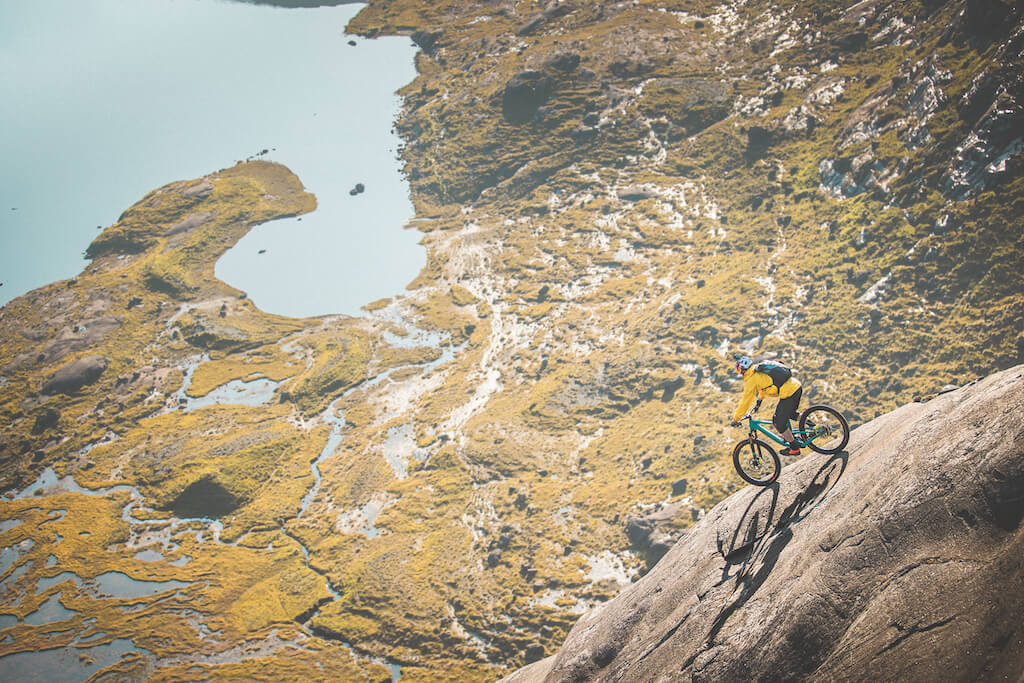 2. Lean into the bike

“Quite a big mistake people make when riding mountain bikes is that they have their weight too far over the back of the bike all the time,” says MacAskill.

“As soon as there’s no weight on the front end of the bike, you’re not in control in the same way.”

On very steep sections, like MacAskill on the Slabs, he does quickly put his weight right back over the axle, but as soon as he needs to change direction he shifts to the front, because all the weight on the rear wheel makes it much harder to steer.

“When you’re turning into quarters, you want to have your head kind of over the front wheel, committing to things,” he says.

But rather than simply leaning forward over the bars, widen out your elbows so you’re in a strong ‘press’ position over the bars, ready to drive the bike. 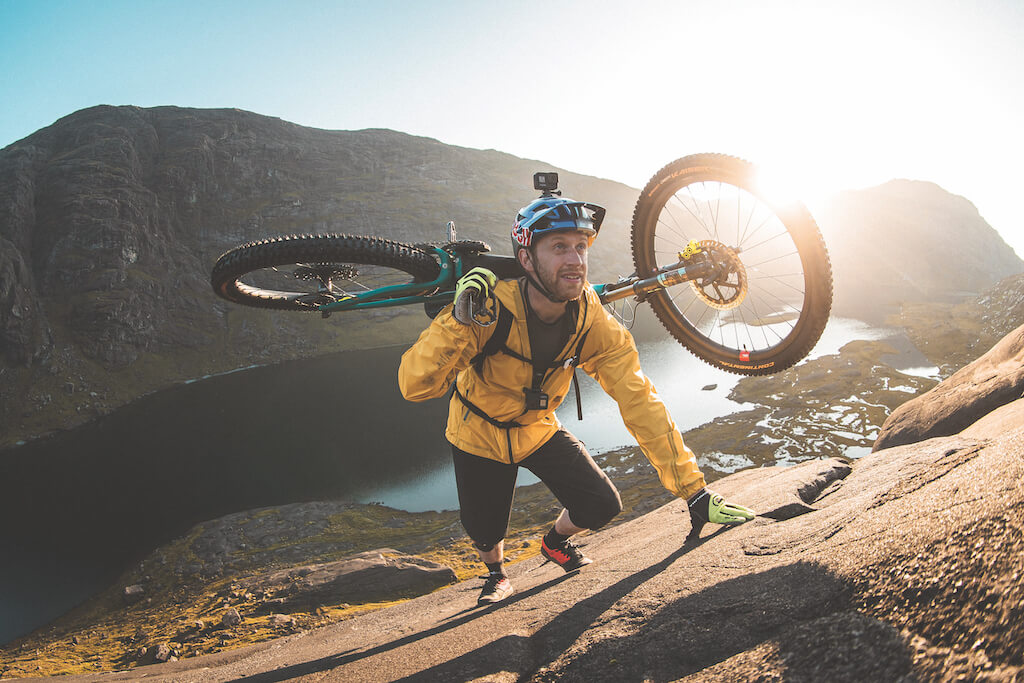 Riding down a steep trail can be committing, because it’s hard to control your speed and you don’t always have a friendly, gradual run out to the flat.

Just as on the Dubh Slabs, you can find yourself heading into a wheel-catching hole. The first thing to do is avoid it, but if that’s not an option, you can get yourself out of trouble another way.

“You’re either going to look for something on the way down the steep part that you’d be able to lift your front wheel off,” explains MacAskill, “or you’re going to try to keep your speed down as you roll into it.

“Then, as you go through the compression at the bottom, you want to let the brakes off, so the bike can kind of roll through it while you pump it a wee bit: press the front wheel and the back wheels through that bump. Then you can get back on the brakes or think about what else is coming up.”

4. Realise the need for speed

Of course, you can’t be dragging your brakes all the time. Mountain biking feels the most fun when you can really start to flow down a trail, picking up pace. In fact, speed can be your friend.

“Going through rougher, rooty sections or steps, speed can definitely smooth things out,” says MacAskill. Recently, I’ve been riding with some friends to show them the ropes, and when I back off the speed I actually find the trails harder to ride sometimes, because you’re falling into every hole, and feeling every root and bump.”

It’s true that once you start to skim over the top of things you can stop worrying so much about the smaller roots and rocks under your wheels.

“You’re worried about the corners and the sort of things that are going to really affect the bike if you’re not doing so,” MacAskill adds, “and the speed just comes with confidence.”

He’s quick to add, however, that speed wasn’t a top priority on the Dubh Slabs: “There were sections where I was going as slow as I physically could while still keeping the bike upright – very, very slow!” 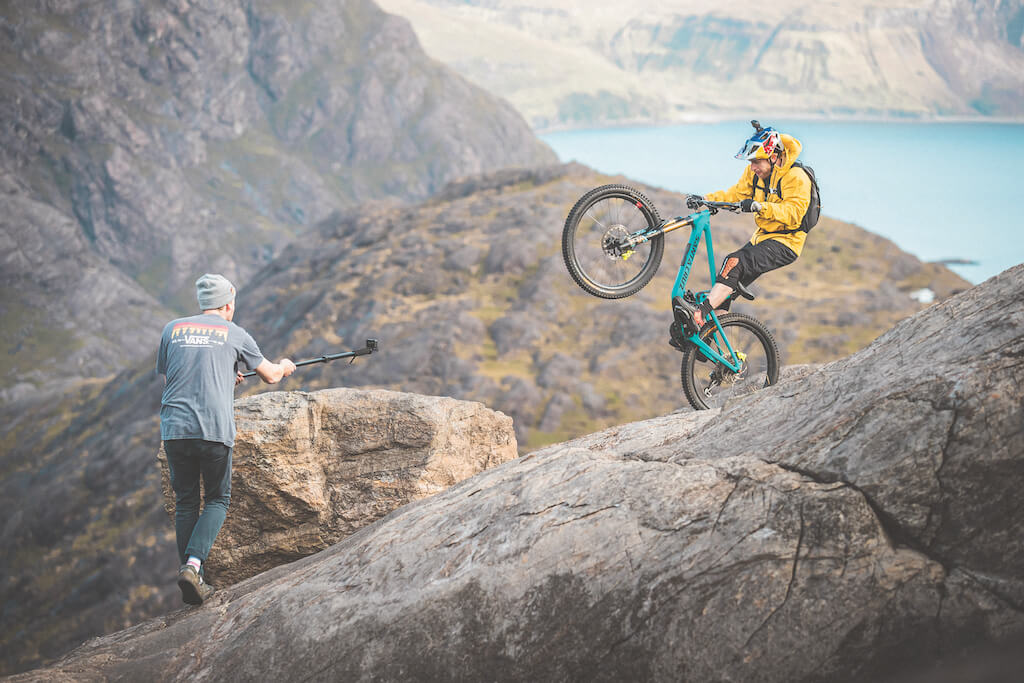 Part of using speed is finding your flow, which is a crucial part of mountain biking. MacAskill says that riding the Dubh Slabs was interesting, because usually a trail is narrow and guides your eye, allowing you to quickly calculate what’s coming up.

“Up there on the Slabs I was trying to keep flow going,” he says, “but I had a lot more free rein, kind of like in skiing or snowboarding. So it was harder to let off the brakes, and I had to take in a little bit more information about what I was going down.

“[Pre-ride] I made some small stone cairns to guide me along and stop me going off some of the blind edges on the way down.”

Fortunately, you won’t have to handle that level of uncertainty, but it shows the value of keeping your head up, and looking down the trail to quickly evaluate what’s coming up and how you will ride it, rather than fixating on what’s right by your front wheel. 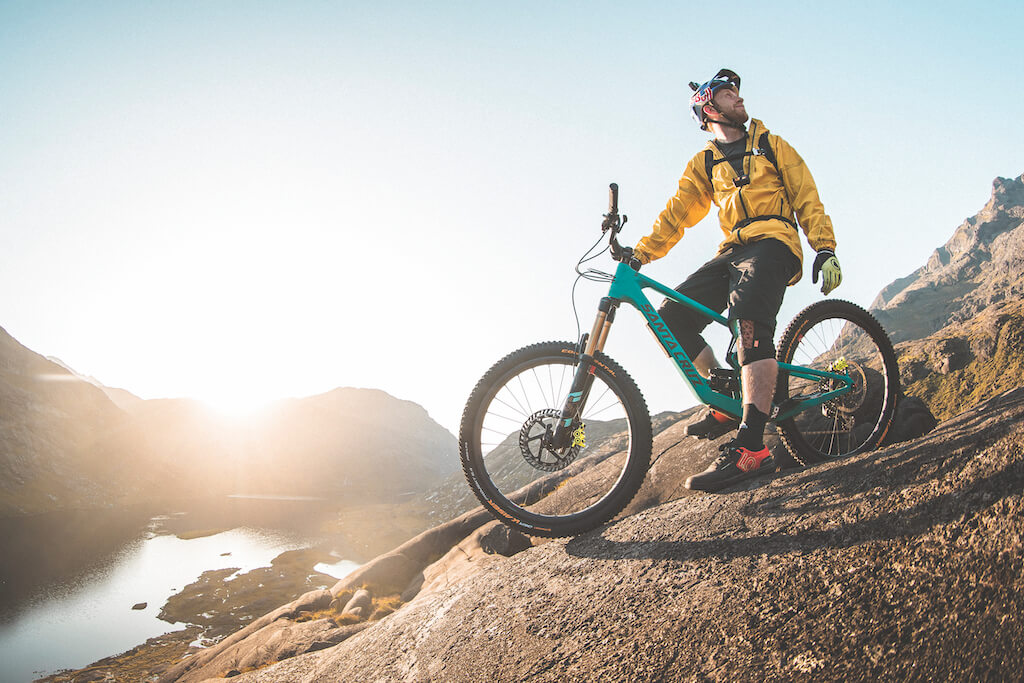 MacAskill knows a thing or two about doing scary stuff on bikes – from riding the super-exposed Cuillin Ridge on Skye, to jumping his bike 360 degrees onto parallel bars.

But like everyone else, he started small: on ramps in his parents’ garden and riding the streets close to home.

As with any sport, the key is to gradually increase the challenge, so that you’re testing your skills and knowledge without getting completely out of your depth.

MacAskill managed to strike that balance on the Slabs; compared to “going upside down” (read: falling off) 400 times to land a brand-new trick, he actually found the fear of the white-knuckle ride enjoyable.

“I could just take information in with my eyes, read it and feel it through the bike,” he says. “I was kind of confident. I mean, there’s definitely a point of no return going into this stuff, so you really have to be on your game.

“But I found that I could actually quite enjoy the fear and the feeling of being precariously out on those edges.”

In the video, you can sense some nervousness in his voice as he descends the Dubh Slabs, but MacAskill found the balance between something that was mentally and physically challenging, yet within his current abilities. And that’s the balance we all need to reach for optimal confidence on a mountain bike.

“I knew I could get through it, as long as I was careful,” he says. “It just meant that I could get good bang for my buck!

“I was there with my friends in the sun, with this little racing drone flying around, and everything worked out really well.”

Danny MacAskill is sponsored by Santa Cruz. On the Dubh Slabs he rode the brand’s 5010 Carbon CC with super-powerful Magura MT7 brakes on the rear.