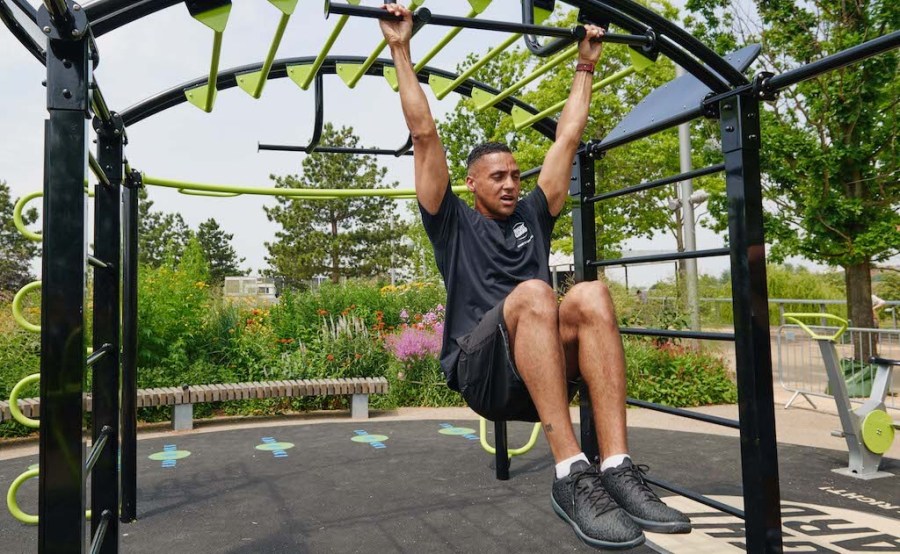 With the plight of the planet impossible to ignore, here are some of the ways you can align your fitness pursuits with an environmental conscience.

More people than ever are exercising on a regular basis. The mind, body and soul benefits of keeping fit are indisputable. But while it’s clear how and why we take care of our bodies, our ability to look after an increasingly fragile planet is not so simple.

However, there are a number of ways we, as individuals, can make environmentally conscious decisions to benefit both body and planet. 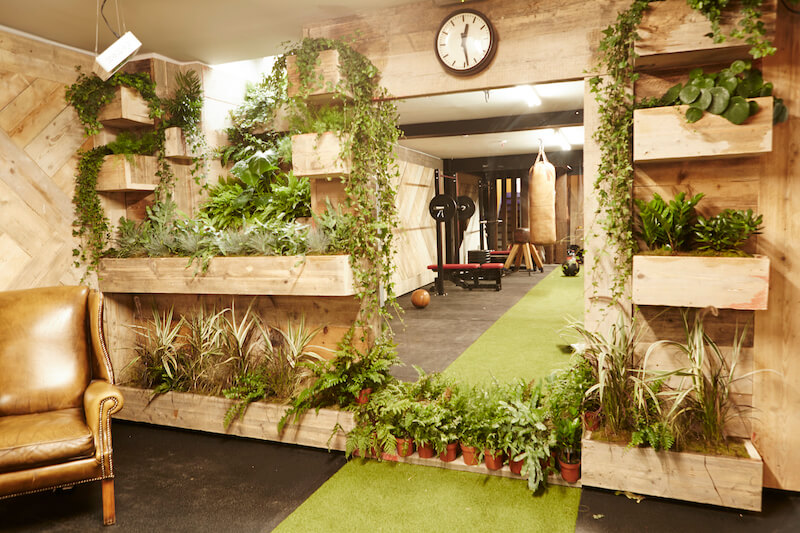 Terra Hale’s London gyms use only recycled or recyclable materials

In the UK, places like Terra Hale in London, The Green Gym Group in Brighton, SO51Fitness near Southampton, and Exclusive Fitness in Liverpool all use familiar-looking cardio equipment that creates, rather than uses, electricity.

However, labelling any facility as eco-friendly is fraught with difficulty. Much has to be estimated, and becoming carbon neutral is a long way off for most.

Every Little Helps
“The aim is to be as green as possible and continually make advances,” said Andy Little, Green Gym Group owner. “I’ve brought in eco cleaning products, compostable hand towels, lights on timers, asked members to drink from reusable containers and looked at ways of reducing water consumption.”

Little’s gym promotes beach cleans, he’s sourced tubeless toilet roll that is delivered in a cardboard box rather than plastic wrapping, and he’s asked other suppliers to do the same.

SportsArt Eco-Pwr cardio equipment is used, which converts the energy produced by users into usable electricity. The kit’s manufacturer calculates that 1,080 Kilowatt hours (kWh) could be saved if four treadmills were used for 12 hours a day for 30 days.

Even though that’s an ambitious amount of use in a month, estimates suggest the electricity generated would be enough to power 1,000 full washing machine cycles, or six weeks of continuous desktop computer use. The reality, frequently, is that the equipment offsets only a small portion of the gym’s energy consumption, but at least users are quite literally moving in the right direction.

Elsewhere, at Terra Hale’s three London studios, everything from the yoga mats to the door handles and rubber gym floors are plastic-free and made from recycled or recyclable materials, says owner Michal Homola.

Energy is produced from spinning, and a rubber tree is planted at an agro farm in India for everyone who signs up for personal training. “Our members offset their carbon footprint by working on themselves,” says Homola. “Your body, mind and the planet – it’s the whole ecosystem we have to look after.” 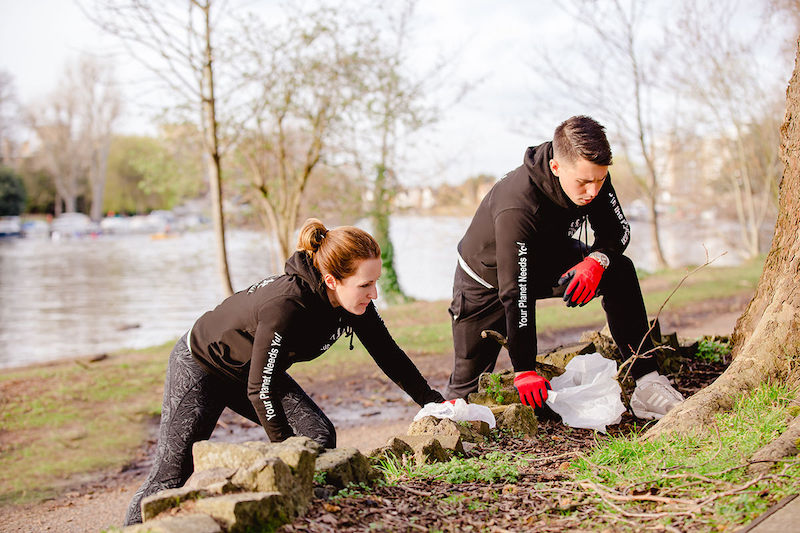 Plogolution go to work on the banks of the Thames

Plogging – a combination of the Swedish phrases for ‘pick up’ (plocka upp) and jogging – is now commonplace all over the world. It simply involves adding some litter picking to your regular runs.

One of the biggest plogging organisations in the UK is Plogolution. “The feeling of wellbeing when you see how much you have picked up can be quite astounding,” says marketing consultant Michelle Parkes, who co-founded the group with friend and personal trainer Dermot Kavanagh.

The pair had been moaning about the rubbish they found when running around the area near Parkes’ home in Kingston-upon-Thames and, after doing their own litter pick, they came across the wider movement.

Rubbish Idea
“That first plog turned into many more,” says Parkes. “We’ve now held more than 60 across the UK and had thousands of participants take many thousands of pieces of rubbish off the streets.”

Plogolution groups sort all their rubbish and recycle where possible, so there is a fair amount of work involved in addition to the run and collect. “You are never going to get PB out of it,” says Parkes. “You’re looking at around an hour to complete a 5k in London, because of the amount of rubbish there is.”

Parkes and Kavanagh have put on big plogging events, as well as the regular 5k and 2k group walking and jogging pick-ups. Last year, they plogged 184 miles along the Thames in six days, and they’ve created a scheme for schools, with education a key general target for the organisation. 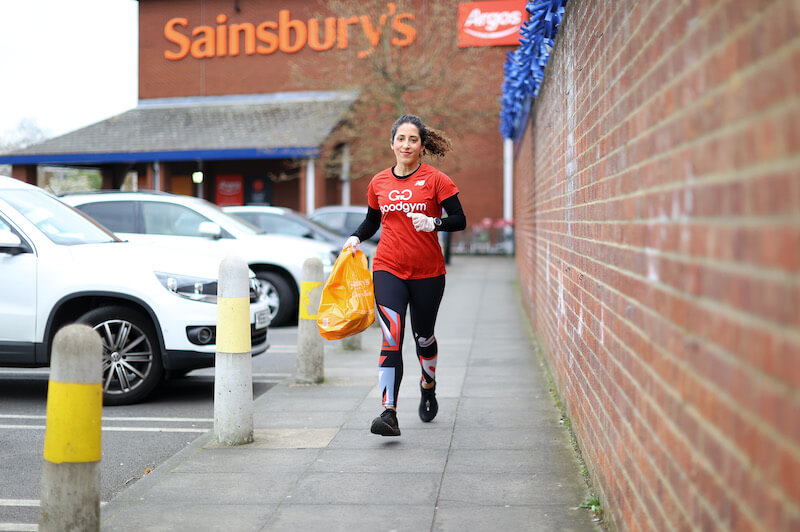 A GoodGym volunteer picks up shopping for an elderly person

If you’ve been frustrated with energy wastage in traditional gyms, GoodGym could be for you. The organisation arose from that frustration, coupled with the founder, Ivo Graham, wanting to make his own fitness a slightly less selfish pursuit.

GoodGym puts on individual and group runs of up to 90 minutes that include spending time with an older person, performing tasks they’re no longer able to – like changing a lightbulb or gardening – or working with a group on community projects, like restoring old buildings.

Do Good, Feel Good
GoodGym is a bit like plogging in that involves running to and from activities, and it provides a sense of wellbeing from contributing to a less able person’s life or your local area. The organisation says helping others boosts exercise motivation and there is well-established science behind the benefits of extrinsic behaviour drivers.

GoodGym’s qualified trainers, who organise activities, warm-ups and exercises to enhance the running and good-deed fitness boosts, will also get you pumped.

“It’s infinitely better than running on a treadmill,” said Martin Graff, a psychology lecturer who has been a member of Cardiff GoodGym for nearly three years.

“We are using the street as a gym, if you like. We might do squats or press-ups while we’re waiting to cross the road, and the work can be physical. You get together with like-minded, nice people, so it’s also a good social event.” 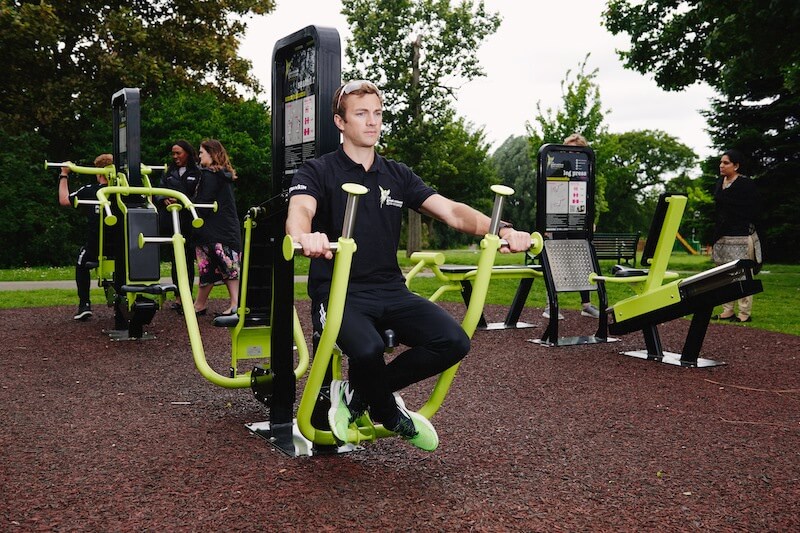 The Great Outdoor Gym Company has supplied around 1,500 free-to-use facilities around the world

Go To The Park

Parks often offer lots of good workout options, from running and bodyweight exercises alone to a whole range of organised group exercise sessions. The location usually means there is a high degree of sustainability, too, and if you prefer the benefits of traditional indoor gyms, you don’t have to miss out.

The Great Outdoor Gym Company has supplied around 1,500 free-to-use facilities around the world and many are scattered throughout UK parks, particularly in urban green spaces.

If you’ve been to a park that has one, the bright colour schemes for familiar pieces of kit, such as pull-up bars, shoulder presses and bikes, are usually hard to miss.

“We based the design of our gyms on indoor gym pieces,” said co-founder Georgie Delaney. “They are simpler and more robust as they’re unsupervised and open to the environment. We’re now introducing variable resistance in our new energy-generating range. You can increase the resistance and you are given feedback about your RPM and watts.”

Pleasingly, the equipment is made from recycled steel on recycled rubber flooring and the manufacturer – which supplies councils, schools and universities – is committed to planting a tree for each product installed in the UK. 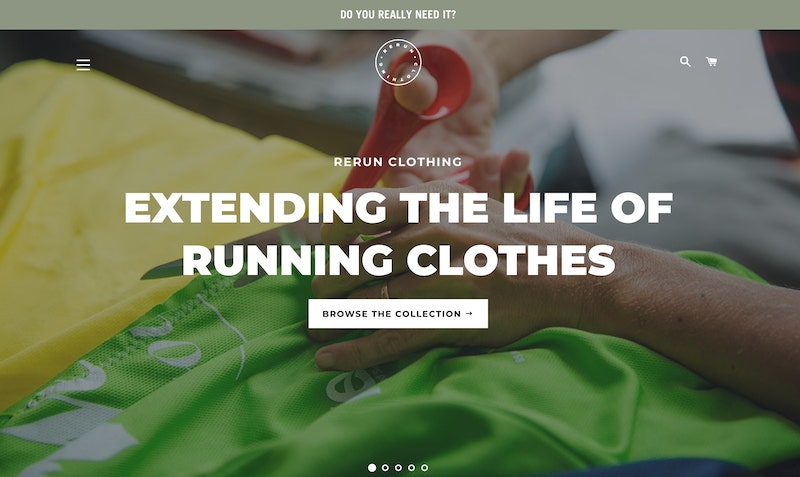 ReRun is a Community Interest Company that resells, reuses and recycles your unwanted running kit.

Founded by GB ultramarathon runner Dan Lawson and his wife, Charlotte, ReRun is tackling the unsustainable ‘need for new’ mentality that most of us are guilty of.

“Our main mission is to keep clothes out of landfill,” explains Lawson, “so we’re happy to take anything – no matter the quality – as long as it’s running-related. If it’s unwanted and it would otherwise end up in landfill, we want to take it. If we can’t use it or sell it on, we will hold onto it until we can find a suitable recycling company to send it to.

“We want to promote consuming less, buying less and making clothes last longer. Ask yourself, do I really need this? And answer that honestly. That’s the same with race t-shirts: before the person at the finish hands it to you, ask: am I going to wear this, and do I want it?

“Most of the time the answer is going to be no. But even if the answer is yes, ask yourself whether there’s a more sustainable means of getting it: can you get it second-hand either with ReRun or on eBay or somewhere similar.”