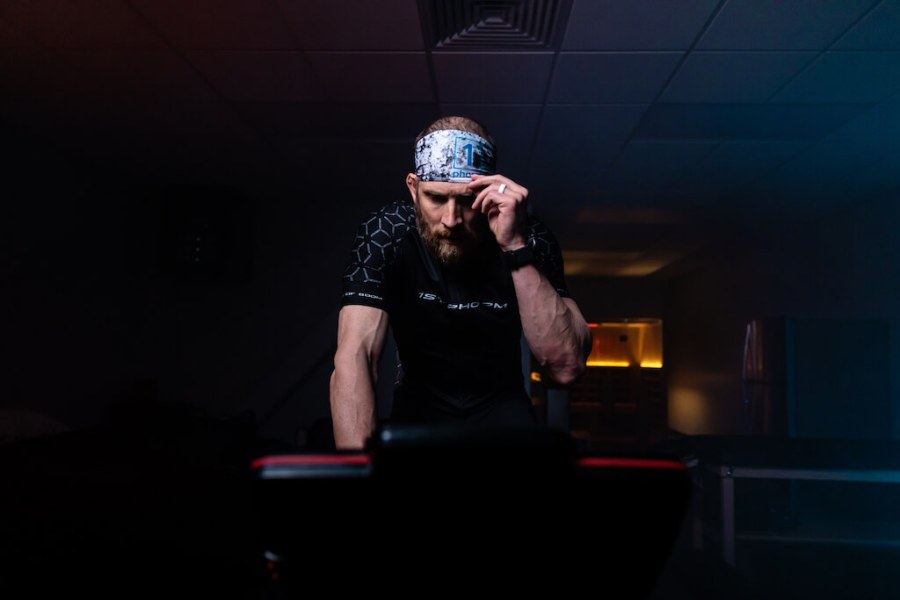 The first person to complete 50 full-length triathlons in 50 consecutive days is now going for The 100. While you’re unlikely to emulate that undertaking, there are some key lessons all of us can take from the Iron Cowboy’s approach to endurance.

Back in 2006, James Lawrence ran his first ever four-mile fun run. He’s since gone a few steps further…

Fast-forward 15 years and the 45-year-old has upped his endurance game considerably, with several Guinness World Records to his name.

His crowning achievement was in 2015, when he became the first and only human to complete 50 full-distance triathlons (AKA the Ironman format) in 50 consecutive days, across 50 US states.

Now, this endurance renegade and father of five is attempting to go one better. But he hasn’t raised the stakes to 60 full distance triathlons, or even 80, he’s just flat-out doubled it.

That is puzzling, given that there’s no one else coming close to challenging him. So, we have to ask, why 100? “Because it was the only number that scared me,” Lawrence tells us.

Some men are made of different stuff and driven by more powerful forces. James Lawrence, clearly, is one of these men.

However, his approach to all things endurance does have critical lessons for anyone looking to push their limits and exceed their expectations.

So, how can emulate the iron will of a man who has already demonstrated that you can redefine what’s considered humanly possible? 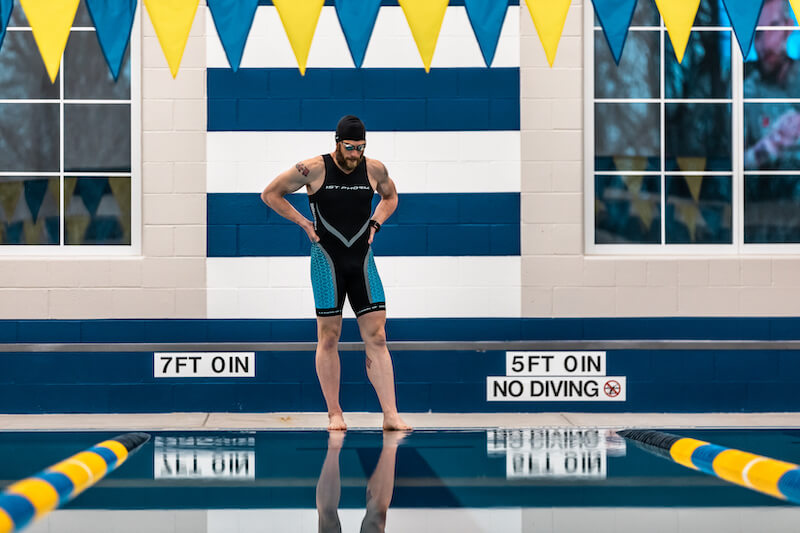 Lawrence in training for ‘The 100’

When he did his first fun run, Lawrence hadn’t even heard of Ironman: the full-distance triathlon that involves swimming for 2.4 miles, then riding a bike for 112 miles, then finishing things off with an entire marathon of 26.2 miles.

But less than ten years later he had done 50 full distances, back-to-back.

As a result, you’d imagine Lawrence would be consumed by a passion for racing triathlons. But ask him what passion and purpose mean, and he’ll say asking that causes you to spin around in circles:

In a sense, it isn’t even triathlons that get him out of bed in the mornings. They’re the framework he uses to challenge himself, as we all do in life.

“We all continue to push the envelope,” he says, “and in time we do one of these challenges, our mindset changes and we experience a growth in perspective.

“When I did that first four-mile fun run, not even conceptually could 100 full-distance triathlons come into my head – like, not even close.” 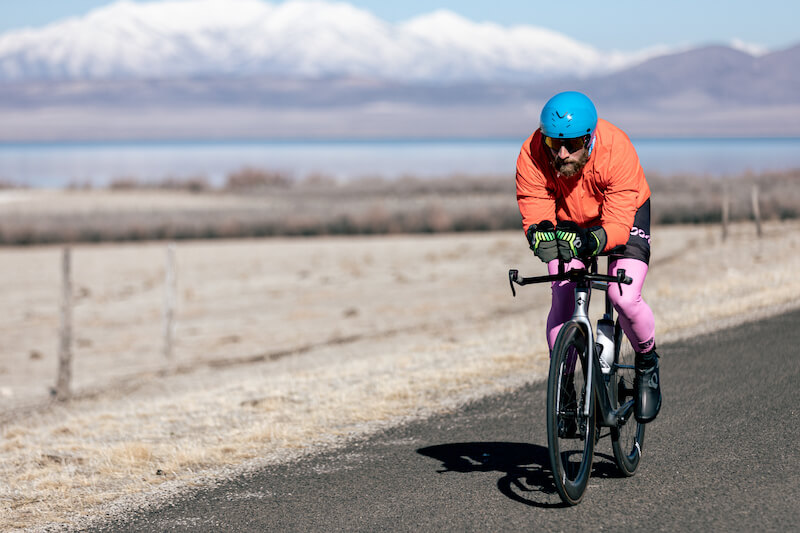 When it comes to mind-warpingly extreme endurance challenges, this isn’t The Iron Cowboy’s first rodeo.

Doing 50 consecutive full-distance triathlons in 50 different states almost broke him. He suffered blisters, saddle sores and gut issues. His tendons and ligaments started to break down, and six of his toenails fell off.

But it was the cumulative mental and physical toll, in the form of extreme fatigue, that almost ended his bid.

So, how will things be different this time around?

“Well, the 50 was riddled with chaos and noise, confusion and distraction and unknowns,” he says. “So I said, ‘OK, if we’re to double this, what would need to happen?’

“The answer was to solve the chaos: put a team around you and control the environment. I tell people all the time, one of the hardest things to do is to get to the start line healthy and ready, with everything in order.”

For the 100, Lawrence has been through a rigorous training camp, and he’s using a single location with a full team of support staff.

“When we stop every single day,” he says, “my number-one focus is going to be muscle relaxation. I’ve got a physiotherapist who’s going to be trying to work on any hotspots and make sure that we’re lengthening out the muscles as best we can.”

He will be spending two hours in a hyperbaric chamber, breathing pure oxygen to assist recovery, and then the next priority is sleep – the deeper the better.

Lawrence will be using Brain Tap to calm his mind and neurological system down, and analysing sleep data with Bio Strap.

“We’re going to do everything we can to maximise sleep and recovery,” he says, “because it’s the most important thing to curb the high levels of exhaustion.” 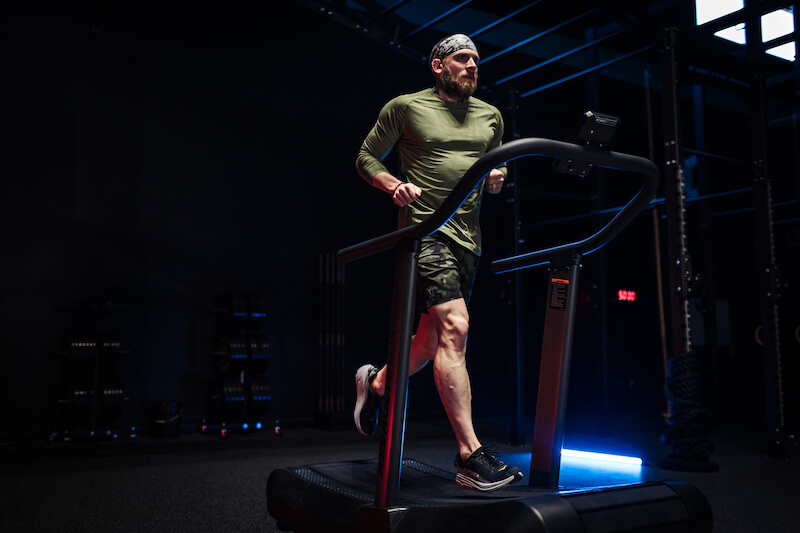 In any extreme endurance challenge, your mind is likely to wander and trip into traps laid by your subconscious, which is often littered with the wreckage of past experiences that didn’t go quite to plan.

Lawrence is only too aware how that can result in wasting energy on what might happen down the road.

“I believe the word is catastrophism,” he says. “People start to hyper-focus on an ego battle or a hypothetical future event and we start to spiral out of control.

“When that happens, you’ve drawn an immense amount of energy away from the task at hand, which is ultimately the most important task because it’s the only one that you have any power over.”

So what’s the trick to avoiding such spiraling thoughts?

“Learn from the past, respect the future, but give all your energy to the present,” says Lawrence.

He believes the trick is to have 100 per cent belief and conviction your vision, even though he knows that there will be moments in the 100 when he will have to take it one step at a time:

“In those darkest moments where we’re struggling, or having issues, or a mental block, or that bully inside of our head is attacking us, then we need we need to dial it all the way back to where we believe that we can be perfect for one second.

“Once you start to create those small wins, one second at a time, they can turn into a perfect minute, and a perfect hour, to the point where you’re going to have perfect days.”