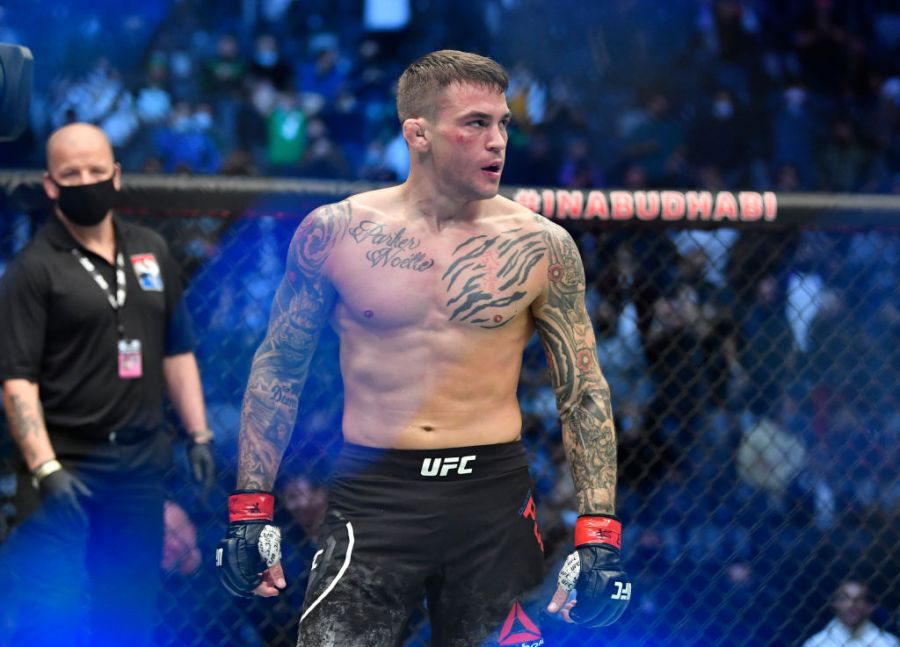 Dustin ‘The Diamond’ Poirier is a perennial UFC Lightweight title contender – he will fight Charles Olivera for the title on 11 December – and one of the most respected names in the sport of mixed martial arts.

The UFC Lightweight division is generally regarded as the most competitive class in the entire sport, boasting a host of elite fighters such as Justin Gaethje, Conor McGregor and the recently retired, undefeated legend, Khabib Nurmagomedov.

Poirier’s current status as one of the very best in this division has been forged in the white-hot crucible of combat, pushing both himself and his opponents to the absolute limits in some of MMA’s most memorable battles. Despite possessing a fearsome striking game within the octagon, not to mention a cardiovascular system that allows him to push harder than most in the crucial later stages of a fight, Poirier has grown as a man, as well as a fighter, in the years since he joined the UFC ranks in 2010.

As a philanthropist, his Good Fight Foundation seeks to improve the lives of others, while Poirier has been praised for the dignified way that he handled the less-than-savoury verbal attacks from Conor acGregor, following his two victories over the outspoken and controversial Irishman in 2021.

MF: From somebody who has been doing it successfully for a long time now, what do you think it takes to be a professional fighter? Is it a natural disposition or can it be learned?

DP: I think it’s a bit of both. For me, what it really comes down to is hard work and the willingness to be dedicated to my craft. Experience also plays into success: the more you fight, the more comfortable you are in different situations in the ring. With that comfort comes confidence. It takes all the above to be a professional fighter.

MF: One of the more unique elements of your fighting style is your ability to switch from southpaw to orthodox and throw fight-ending punches from your right. What’s your approach in training to create such a well-rounded striking game?

DP: I’ve always been a gifted striker – it’s always come naturally to me, but I learned early that I had to be good with my legs to be a top fighter. It takes a well-rounded fighter to win at the highest level and I’ve always fully understood that. I put a lot of time and effort into training to perfect these specific moments.

MF: You’re seemingly always able push the pace, even as damage and fatigue take their toll on both you and your opponent. How do you reach that level of conditioning?

DP: It’s really a combination of endurance and strength training. A lot of it is mental, too. Knowing how to mentally overcome adversity, be confident in the ring, and ultimately knowing how to trust yourself and your ability. I also surround myself with the best trainers and resources possible. 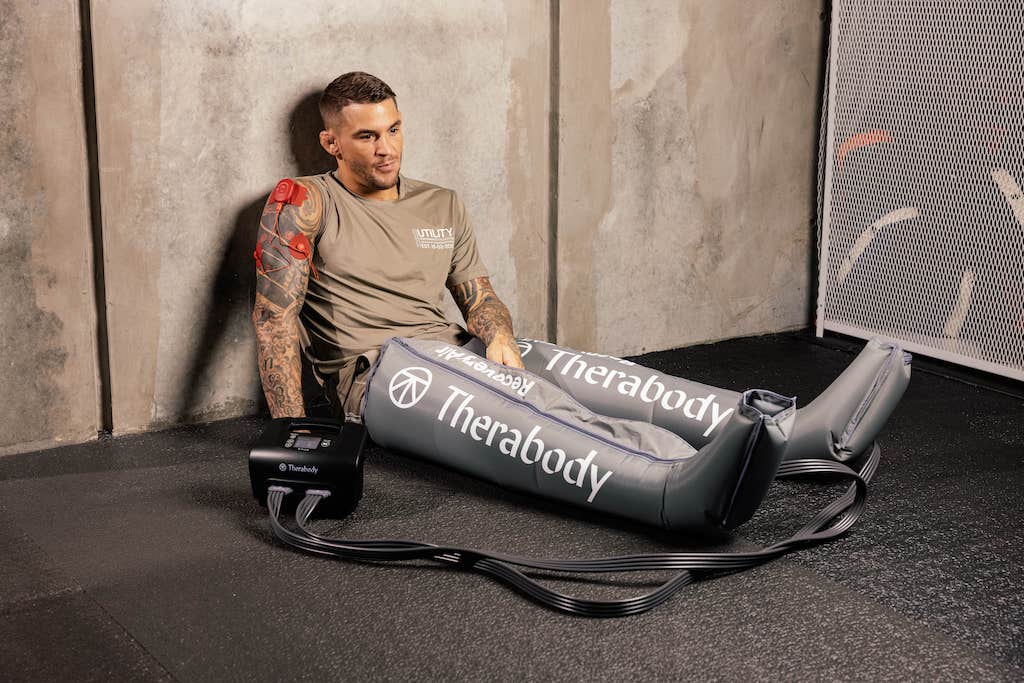 Dustin Poirier is a Therabody ambassador

MF: What about the other end of the training spectrum: recovery?

DP: Recovery is a critical element of training and something that is incredibly important in this sport. Having a solid routine is really the only way to bounce back faster and stronger. Therabody has been a huge part of how I recover and ultimately how I train. Because I’m able to shorten that turnaround time between workouts, I’m able to go that much harder and make significant progress in the gym.

MF: Speaking of recovery, after the Khabib fight you mentioned that you’d switched to a plant-based diet for recovery. Is your approach to nutrition constantly evolving?

DP: I’m always tweaking my diet and changing the way I eat to help strengthen my body. I love food and I love to cook, so I enjoy experimenting with my diet and finding what works best for me. Nutrition is another super-important part of staying in shape so I’m always eating healthy, but I love to have fun with it. I’m from Louisiana, so I love cooking with heat and cajun-inspired seasonings. I even have my own line of Louisiana Style Hot Sauce.

MF: How has MMA changed since you entered the game? And what advice do you give to those just starting out?

DP: The sport has grown so much since I started: higher stakes, more money, more attention. My advice to those just starting out is to not get caught up with the external side and just to work hard. The truth is always going to come out in the ring, so make sure you’re putting in the work, mentally and physically, to be as prepared as possible.

MF: If you could fight any MMA fighter, from any era of the sport, who would it be?

DP: George St-Pierre would be my dream fight. [GSP is the decorated former UFC Welterweight and Middleweight champion, who has previously discussed returning for a Lightweight title challenge.] 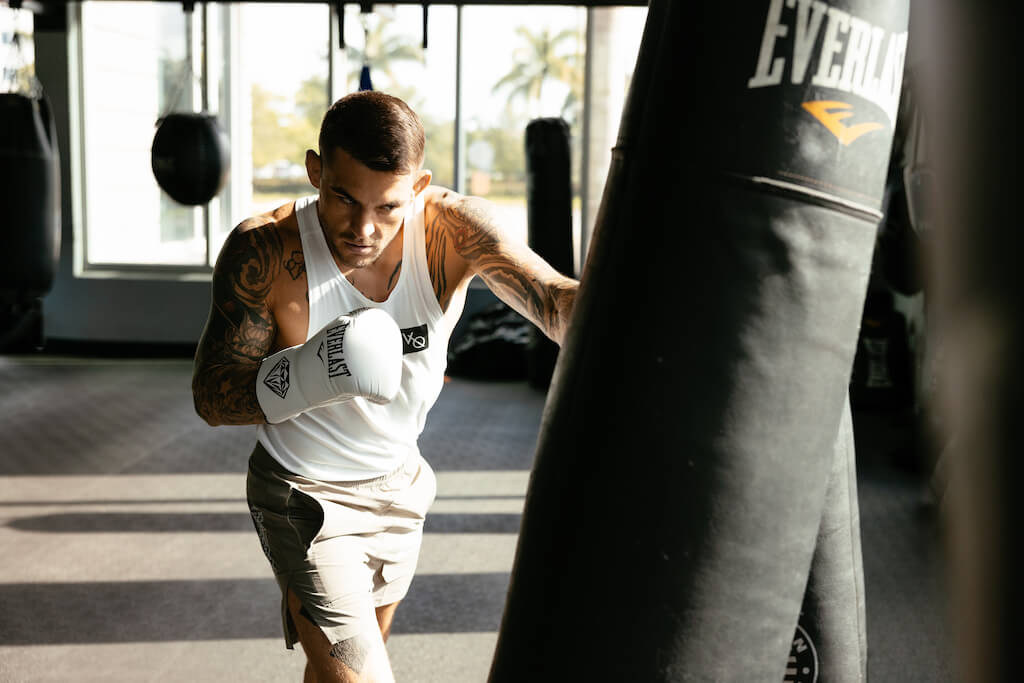 There are so many aspects to training, but I usually categorise them into three main focuses:

The first focus is really around strength and movement, so I like to work in sled pushes, plyometrics, jumps, resistance, and core work.

The second focuses are really the fundamentals of fighting. Quickness, power, agility – it’s all maintaining control during a fight.

The third is more cognitive conditioning, depth perception and working on muscle memory.

A few of my favourite workout moves include box jumps, medicine ball slams and bag work.