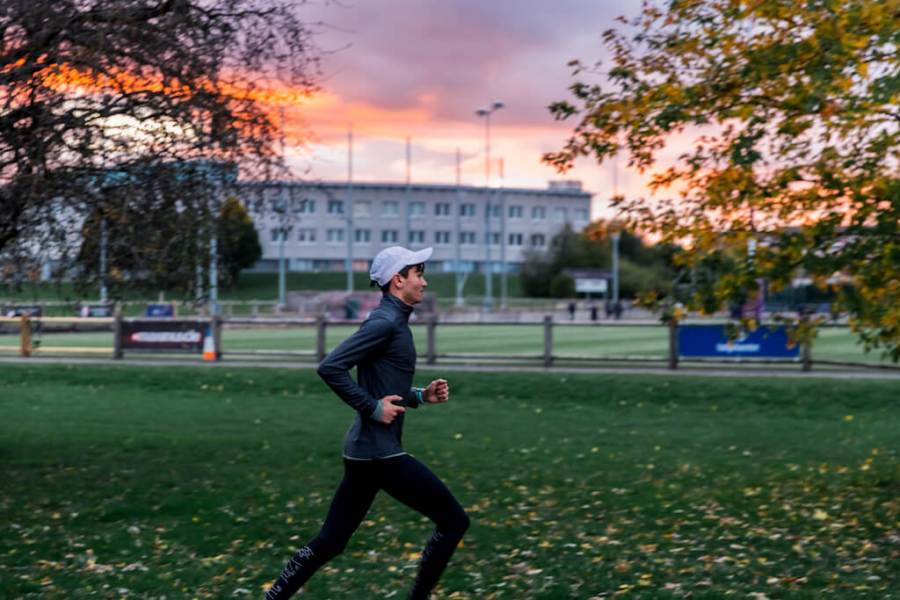 When Alex Yee is suffering through a 1.5km swim, 40km bike ride and 10km run during an Olympic-distance triathlon, he battles the painful lactate torching his legs and the demons tormenting his mind by asking himself one simple but energising question: ‘What next?’

The 24-year-old won silver in the men’s triathlon and gold in the mixed relay at the delayed Tokyo 2020 Olympics last year.

But when he’s struggling, Yee says he asks himself, “What is the best thing I can physically be doing for myself right now?”

Bringing himself back to that, he says, means he can always get more out of himself: “It gives me a ‘why’ and a ‘purpose’ for what I am doing.”

The Lewisham-born athlete, who nudged ahead of his heroes-turned-teammates Ali and Jonny Brownlee in recent years, takes the same ‘what next?’ approach to his training and race targets.

Having enjoyed a sensational 2021 season, supplementing his Olympic medals with his first World Triathlon Series win in Leeds and the Super League Triathlon title, Yee is now chasing more gold medals at the Commonwealth Games in Birmingham in July.

Empowered by his sports science degree at Leeds Beckett University, and inspired by the world-class facilities at his current training base in Loughborough, Yee is always seeking to up his game: from training in heat chambers, to adapting his race-day breakfast and experimenting with new workouts.

In his relentless drive to be better, Yee represents the next generation of triathletes who have grown up with elite ambitions. It’s easy to forget that triathlon was a niche pursuit until relatively recently, with the sport only making its Olympics debut in 2000, when Ali Brownlee was already 12 years old.

“I was probably one of the first era to start triathlon as triathlon, whereas a lot of people had been drawn to the sport before from swimming or running,” says Yee.

“There is a lot of intricate things about our sport that are less explored and underdeveloped in comparison to the other sports, so I am always trying to find out more and tap into that.”

It’s that desire for self-exploration which first drew him to triathlon.

“I started doing triathlon because my dad did duathlon and he took me to my first Crystal Palace Triathletes session,” he recalls. “Triathlon posed that extra challenge that other sports didn’t. I’m quite a resilient person. I want to get the most out of my body. And triathlon gave me that challenge.”

Although Yee is now Britain’s lead male triathlete, with Ali Brownlee targeting longer-distance events and Jonny seeking new adventures, he acknowledges that he is standing on the shoulders of giants.

“A turning point was that 2012 Olympic Games,” says Yee, who was 14 when the Brownlees claimed gold and bronze at London 2012.

“For any young person to have that level of competition on your doorstep is incredible. It was bizarre watching Jonny race, and me being on the side lines three or four deep, to then being on the team with him. I still find it hard to believe I am the person who first crossed that finish line (in Tokyo).”

He trains for 30-35 hours per week, with eight to nine hours of swimming, 12-14 hours of cycling and seven to eight hours of running, plus two gym sessions.

“It’s a lot of training and quite arduous, but the beauty of our sport is that a lot of it is social and relatively aerobic so it’s enjoyable,” he says.

“There are obviously times when you really have to knuckle down in the week and dig into the depths of your soul, but there are also times when you’re just really enjoying what you’re doing.”

But Yee is always driven by that same question: what next?

“I am always asking a lot of questions and every time I set out my goals for the year I make sure it’s purposeful,” he explains. “That’s my key word. I want things to have a purpose, otherwise I don’t see a reason to do it, or I’m not as motivated. Knowing why I’m doing anything is so important.”

It was this mindset which led him to perform dedicated heat acclimation training ahead of Tokyo 2020.

“That included my pre-race nutrition strategy, pre-cooling, wearing ice vests and doing some work in the heat chamber prior,” he explains. “I’m sure there will be something new for Paris (2024) as well.

“There are a lot of rules changing, including the clip-on aero bars being removed in 2023 (for safety reasons), and the mixed relay order changing (with a new man-woman-man-woman format), so you need to think outside the box.”

Yee has also adapted his running training in recent years in surprising ways:

“Unlike a lot of the training I used to do I now do a lot of sessions where I don’t go all the way to my maximum on the track. For example, I do slightly longer reps at 10k pace (4.25-4.30 mins per mile), then drop down to shorter reps at 3-5km pace (4.10-4.15 mins per mile) but with a short float recovery, which forces you to recover at a slightly higher pace.”

That better replicates the demands of a race, when you need to react to attacks then settle back into a strong but steady pace. His coach will sometimes cycle alongside him and get him to hit random efforts to simulate attacks.

“It’s challenging,” he says, “but keeps you stimulated.”

Although his bike training mostly involves endurance miles, Yee also focuses on his ‘LT2’ (second lactate threshold), which represents how hard you can push without slipping into anaerobic efforts.

“I’m trying to develop my LT2,” he says, “because it means I’m in a better state and can tolerate that kind of lactate better off the bike.”

One of Yee’s go-to cycling drills involves the following:

Yee swims four days a week, too, but each session has a fresh focus.

Knowing how to make progress in hard times is crucial for all athletes, and Yee successfully used the disruption of the pandemic to refine his recovery protocols.

“Because we were forced to be in one place,” he says, “I was able to switch off and recover. His new routine includes using MyoAir pneumatic compression wraps to flush lactate out of his legs, as well as the MyoPro massage gun “as activation to switch on any tight areas and make sure they’re ready to go.”

In his pursuit of marginal gains, Yee has also taken the ‘what next?’ approach to his race-day nutrition.

“I have changed to just having rice the night before and in the morning,” he reveals. “It sounds bizarre and not very exciting. But it is an effective way to reduce GI distress and to fuel effectively. Having too much pasta gives you a spike in fats and fibre which you don’t really want before a race.”

Yee is now hoping to see the results of his training upgrades at the Commonwealth Games in Birmingham in July:

“It is a huge thing, not only because it is here in the UK, but because it is at the end of this awful time we have been going through.

“That is my big goal for the year. We also have the World Series and the Super League Triathlon. But I just want to work on getting the most out of my body, learn a lot and try to improve.”

WHY: “I am starting a project on my upper body, which is probably a lot weaker than everything else,” says Yee. “It’s to do with my power and my swim stroke, just being able to get into a powerful position in the water where I can pull through the water effectively.”

HOW: Yee strengthens his arms, back and traps for swimming by doing dumbbell rows, cable Cuban presses, and side-on cable front raises. “I also do deadlifts and weighted pull-ups,” he says.

WHY: “I do fundamental leg stuff every week – mostly hamstring and calf work – where I make sure I get enough load to get that strength and stiffness to set me up for running during the week,” Yee explains. Strong legs provide the foundation for a robust running performance.

HOW: Yee fortifies his legs with Romanian deadlifts and reverse lunges. “It’s all relatively low weight, maybe 60-80kg, but I do them consistently,” he says. “I also do step-ups, where I focus more on movement mechanics than weight, so 30-40kg on the back.”

WHY: “I do deadlifts for strength but also for power,” explains Yee. Power helps to deliver more explosive kicks, attacks and sprints during the swim, bike and run legs.

HOW: To increase power, lower the reps and increase the weight. “I start with higher reps, and then reduce down, so I start with 3 reps of 4 sets and then 4 reps of 3, and then down to 5 reps of 2,” says Yee. “So for a deadlift, I start at 75kg then go through to 90-95kg to increase that power.”