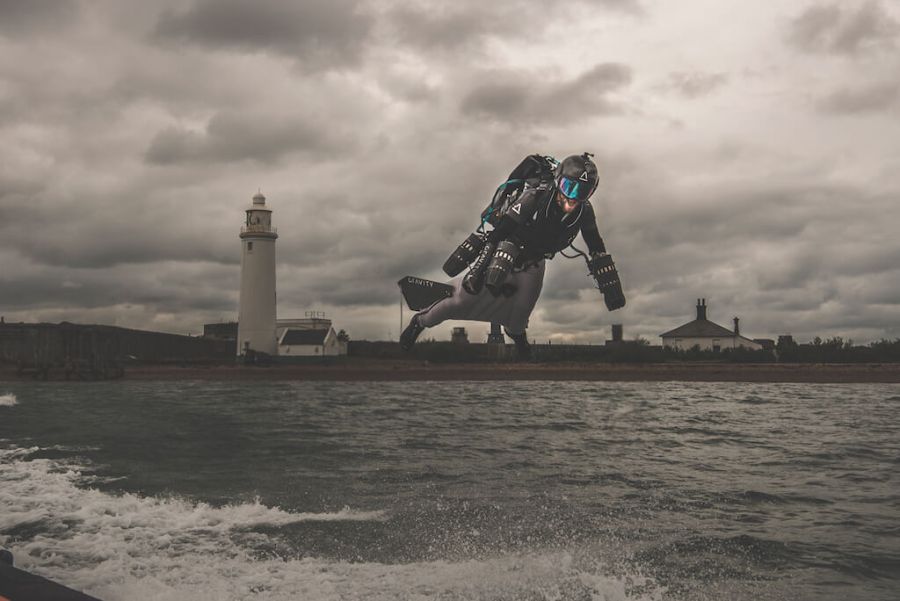 Dubbed ‘the real-life Iron Man’, Richard Browning is the founder of multi-million dollar business Gravity Industries, and the creator of the Daedalus flight suit, a jet-powered exoskeleton that allows him to fly through the air.

He’s also in serious shape, having undertaken the kind of endurance training that most Ironman triathletes would admire.

In one sense, Browning was always headed in this direction, with both flying and scientific endeavour in his blood.

As he puts it, “My inspirations were growing up around my maverick inventor father. His father was a wartime pilot, and my other grandfather was Sir Basil Blackwell, who ran Westland Helicopters [the main UK company who aspired to commercialise helicopter flight throughout the 1970s].”

Browning’s military training also played heavily into his belief in himself, both mentally and physically:

“A big factor in my motivation and the belief that this was in some way possible, was [due to] my time in the Royal Marines reservists, my passion for calisthenics training, and the triathlons and ultramarathons I used to compete in.” 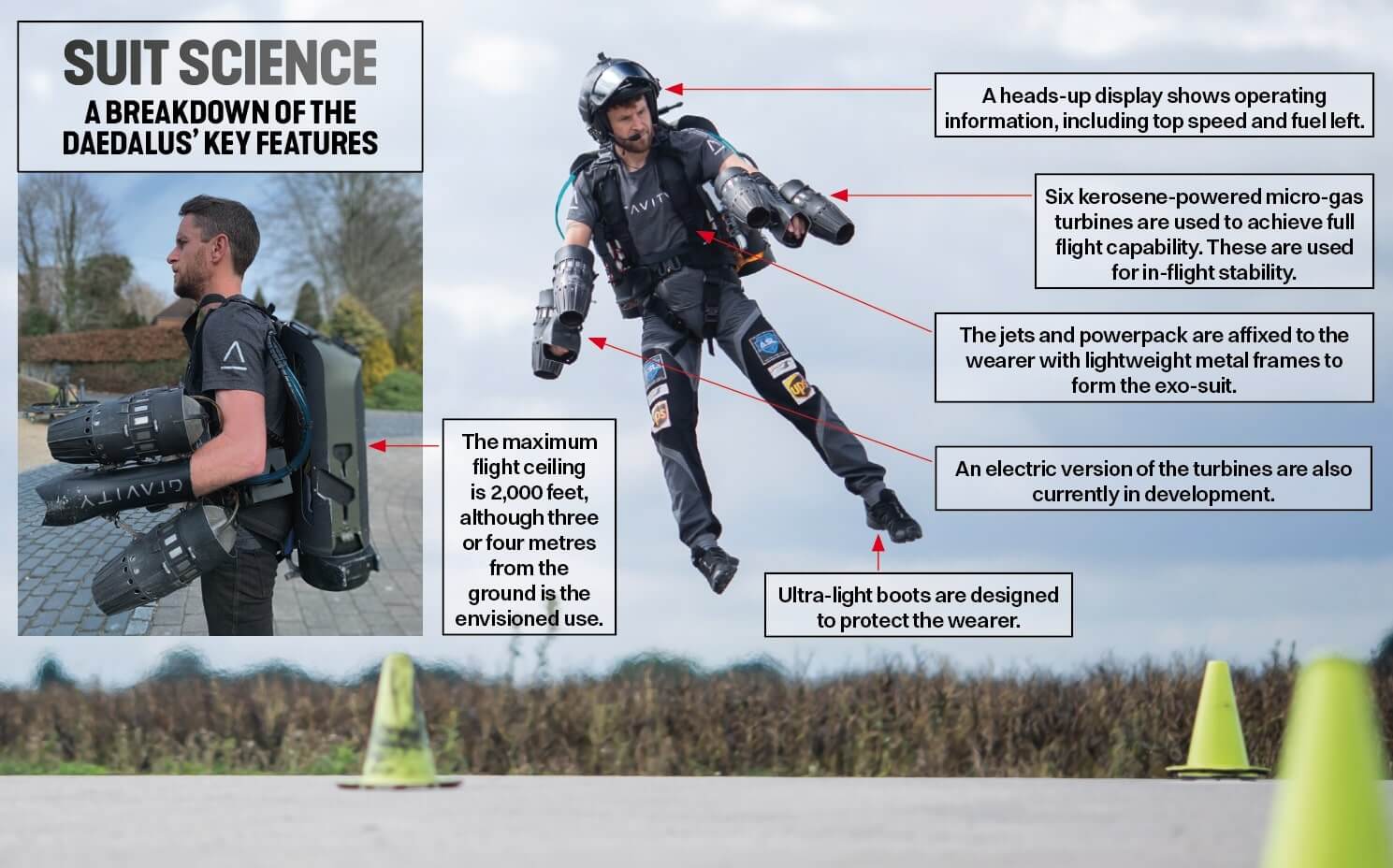 Of all of the fitness disciplines that Browning has engaged in, it is calisthenics – with its unique interplay of strength, mobility and stability development – that enables him to control a 1050-brake horsepower flight-suit.

“To believe that you could fly in this really unusual way,” says Browning, “and lean very much on the brain and the body, drew a lot on my passion for calisthenics: the idea that you can roll up from a crunching position on the floor, up into a handstand. That gave me the confidence that maybe this [operating an eco-skeleton flight suit] wouldn’t be quite as difficult as people imagined.”

Browning’s original tests with the suit’s first prototype were conducted in a country lane, watched by a bemused onlooker tending to her vegetable patch. “The start of it was one engine in an aluminium tube, standing in a country lane going, ‘Oh, it makes a hell of a lot of noise, but if I close my eyes and ignore it, the handling is actually really gentle.’”

Iteration followed iteration, until at last a controlled six-second flight convinced Browning that the technology’s potential could be realised. The next step, though, was to convince the world that he wasn’t just another crackpot inventor.

“Once the design is working,” recalls Browning, “how do you package it and brand it to the public so they don’t think you’re just another mad British nutter in his shed trying to blow himself up? We launched with Wired, Red Bull, and the Gravity brand – all of that slick stuff – because that helps convince the public that it’s legitimate.”

But how does the suit actually work?

“It’s the Newtonian principle of blowing a mass of hot air away from you so that you go the other way,” explains Browning. “If you point that air downwards, with two engines on each arm and one on the back, you go up. If I start flaring my arms out, guess what: there’s less vertical components, therefore I start to sink again.”

According to Browning, much of the skill and ability to balance the suit comes down to simple intuition, and the ability of the brain to apply real-time feedback to situations. “Something we’re really good at as humans is balance,” he says.

“When you think what’s going on internally when you’re running on an uneven surface, it’s mind-boggling. You’re getting instantaneous feedback on a rough surface and your brain gets virtually no time to not only make adjustments, but also to throw the other leg and land the next stride.”

The Daedalus flight suit, Browning believes, is just as intuitive, although constant iteration has made it easier to manage: “In the early versions we were just muscling it, but now we’ve got lots of subtle angles in the engine, and the thrust vector begins to lift the weight of the equipment.” 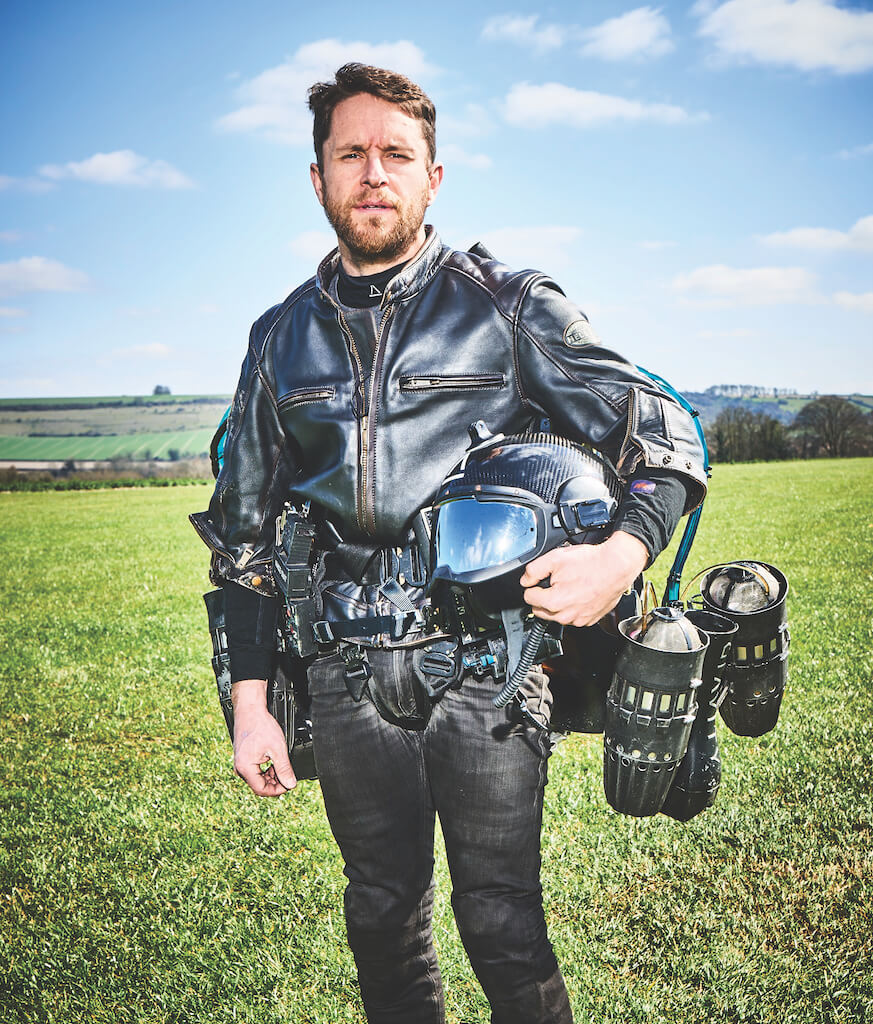 Of course, that’s not to say that peak physical conditioning isn’t beneficial, especially when flying the suit for extended periods of time, or pulling multiple G’s through intense flight manoeuvres.

For Browning, it’s a return to that particular combination of two distinct fitness disciplines:

“They’re weird bedfellows, but ultramarathons and calisthenics. Ultras kept me light, and calisthenics – with that light bodyweight work – gave me a very balanced strength. Just being able to bang out bicep curls is great, but the strength that you need in your shoulders to be able to do a handstand rollup or a flag require micro muscles that give you much greater stability.”

Wearing the suit, which has a flight ceiling of 2,000 feet, is a workout of its own, though, with Browning noticing that his fitness improved after regular flight sessions in the Daedalus:

“Even in my Royal Marines days, I used to find doing more than 15 pull-ups quite hard. Then I managed to do 20 really strict pull-ups with no warm-up, and that’s simply come about from all of the flying.”

According to Browning, the potential for jet-suit technology depends entirely on your perspective. “I can give you two hats here,” he says, “the British one and the Californian one.

The British hat says, ‘This is noisy’ or, ‘It doesn’t fly for a huge amount of time.’ But now, if I put my Californian hat on, well, just imagine where relentless human ingenuity and improvement can take you.

‘I don’t lie awake at night determined to convince people that we’re all going to fly to work and the shops. But I do wonder if we’ve had a role to play if expanding horizons and ticking off another thing that used to belong to science fiction, but is now very much a reality.” 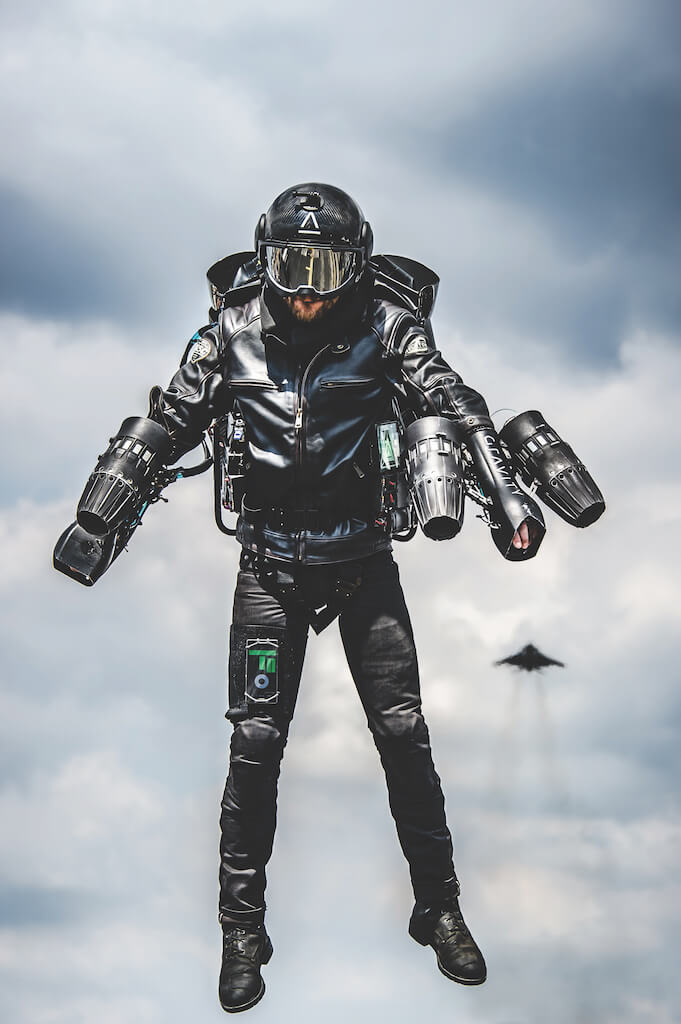 Jet-Set Fitness: How to train like the ‘real-life Ironman’

1. Build a cardio base

“This is good for resetting a busy mind, and as a jet-suit pilot weight really matters,” says Browning.

“This is orientated towards flying a 1000 bhp jet suit,” says Browning. “As with every sport, the stronger you are, the more you can do. For us, it’s mostly about shoulders, lats and core.”

Browning’s new book, Taking on Gravity: A Guide to Inventing the Impossible from the Man Who Learned to Fly, is available now.