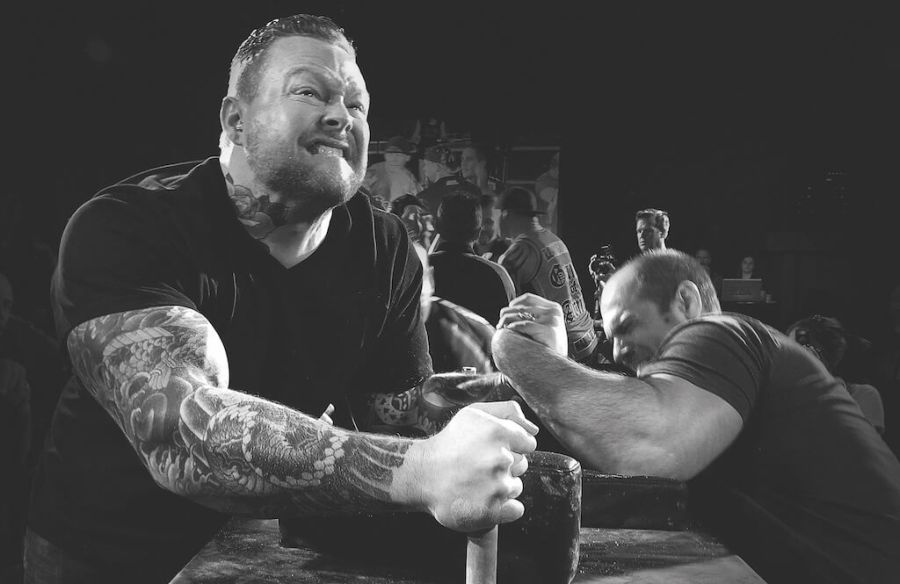 MF meets champion arm wrestler Rob Bigwood to find out what it takes to succeed in this unique form of hand-to-hand combat.

A one-time left-handed Super Heavyweight World Champion, Rob Bigwood has won over 40 State tournaments and his reputation has been further enhanced by his devotion to a vegan lifestyle.

Bigwood’s arm-wrestling success has also seen him become one of the stars of Game of Arms, the reality TV show that follows the lives of men and women competing in the sport. 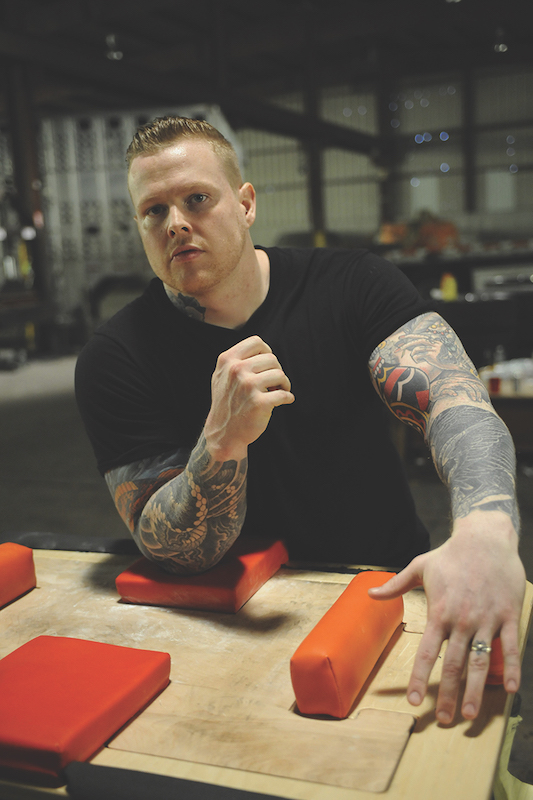 Bigwood was introduced to arm wrestling by a high-school friend who competed professionally. “He talked me into helping him train,” he says.

“I was hesitant, as I knew the pain his body (especially his elbows) was put through by it.”

When he eventually took the plunge, Bigwood’s first competition was in North Carolina in 2001. Just five years later he became a World Champion.

“Competitions are divided by left/right arm and weight class,” Bigwood explains, “and a tournament is usually a double elimination, with the final match being best of three.

“Arm-wrestling matches can go anywhere from a split second to minutes of battling – which feels like an eternity!”

Ahead of a competition, he’s in the gym three to four times a week and he also trains regularly with a group of guys in Queens, New York.

“Gripping up and actually arm-wrestling is the best way to get stronger, faster and build endurance. When I’m at the gym, I use the cables to simulate the sport, since it’s mostly about tendon strength.”

“Heavy-grip isometric pull-ups and static hammer curl holds are useful, too,” he says, “although the best way to develop tendon strength is to actually get table time.”

Bigwood is keen to note that his early days in the sport were fundamental to his success: “I grew up in South Jersey and learned so much from the guys I trained with each week – especially from constantly losing. You figure out your strengths and weaknesses.

“I’m not tall for my weight class, so I developed a technique where I hook my opponent in towards me using my wrist and back.”

Bigwood credits his switch to veganism in 2009 with making him a more effective combatant: “I used to weigh 285lbs (130kg). I was sluggish and relied too much on coffee. Now I’m down to 250lbs (113kg) and have incredible energy.”

Bigwood’s research into factory-farming techniques back in 2002 – based on the guilt he felt at seeing a family of piglets after eating bacon – led to him becoming vegetarian and eventually vegan.

“It was a trial-and-error experience for me,” he says, “but now my diet is completely cruelty-free – that’s what’s most important to me.”

His daily meal plan includes breakfast of either a bowl of oatmeal with a banana, vegan protein shake with peanut butter, waffles, or a bagel with tofu and cream cheese.

“For lunch it’s usually mock meats (seitan, tempeh, tofu) with a grain, side of veggies, nuts and beans,” Bigwood goes on. “And finding plant-based dinner options is easy in NYC – I love Indian, Thai, Mexican, Japanese and pizza.”

“When I train for a competition, I’ll take supplements,” he says. “I’ll have protein shakes, and flaxseed oil and glucosamine for my elbows.” 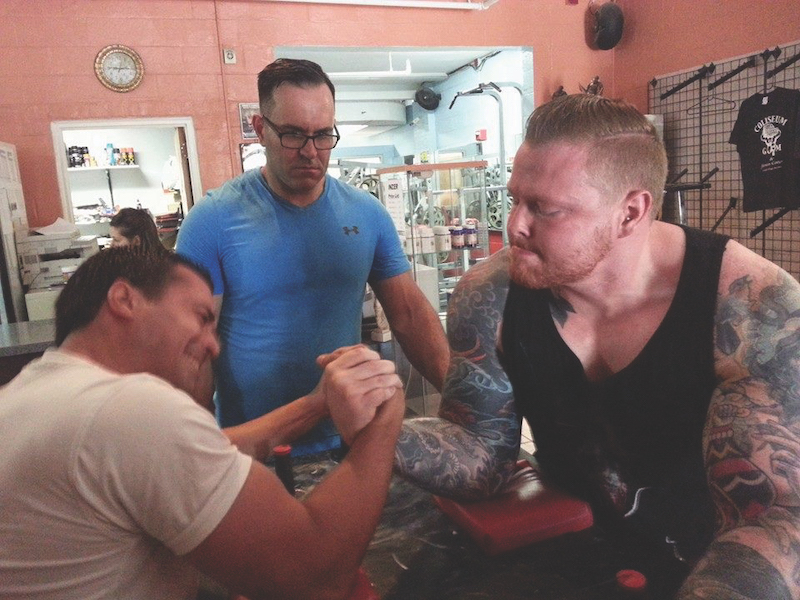 Such close-combat competition has its own element of psychological conflict, as well as the physical demands.

“You can see it in an opponent’s eyes, right before gripping up, if they know they are about to lose,” says Bigwood.

“You can also physically feel it in their grip and setup. Although I don’t play mind games or focus on my opponent like others might, but more on the hours I dedicated for that tournament.

“If I lose, it simply means the other guy was hungrier, trained harder and wanted the win more.”

But he does do his homework. In Season 2 of Game of Arms, when he crushed opponent Matt ‘Chop’ Bertrand 3-0 – his self-declared greatest win to date – it owed a lot to planning.

“I trained for an entire year,” he says, “focusing on the perfect technique to use against his awkward hand and setup. Thankfully, the hard work paid off.”

HOW TO WIN AN ARM WRESTLE

1. “Keep your arm close to your body and in front of your shoulder at all times,” advises Bigwood.

2. “Push off with your foot (same side as the arm you are wrestling with) and don’t be afraid to use your entire body.”

3. “Get your hip as close to the table as possible and position yourself higher than your opponent.”

4. “Point your knuckles to the ceiling and kink your wrist in a curled position on the set-up”.

5. “Speed beats strength most of the time, so try to be as quick as possible from the off.”