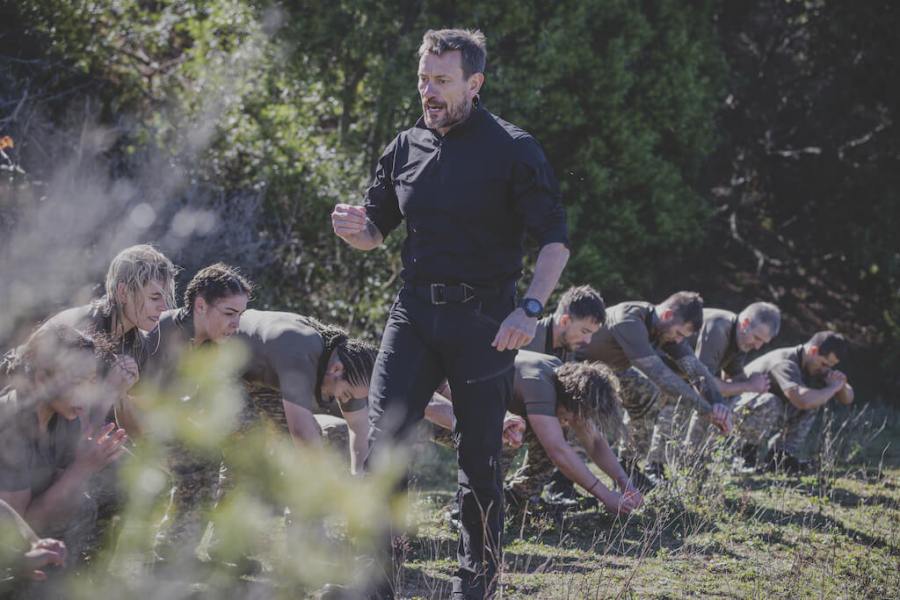 When former special forces operative Ollie Ollerton first decided to join the forces aged 14, he imagined a utopia that never materialised. And only in his 40s did he realise the image he was chasing had been a projection of society’s expectation.

Ollerton’s journey into the forces was unlike any other. As a curious ten-year-old, he and his brother stumbled upon a travelling circus in Burton-upon-Trent. He ventured into a tent, where a 50kg chimpanzee lurking in the shadows almost tore his arm clean off.

“That attack changed the direction of my life,” he tells MF. “I was always looking to be on that pointy end of danger.” For Ollerton, that ‘pointy end’ became war.

At 23, Ollerton found himself facing the final phase of special forces selection: escape and evasion across the Welsh Brecon Beacons. The phase is known for being one of the toughest parts of military selection in the world. Twenty soldiers have died doing it since 1984. Ollerton completed it twice.

He explains the three rules: no civilians, no vehicles, no buildings. “Now, everyone cheats,” he says. “It’s just the case of, don’t get caught doing it. But unfortunately for us, there was a bit of an altercation with a Welsh farmer.”

Ollerton and his group had hitched a lift with a farmer early in the night who, somehow or other, ended up in hospital. The farmer claimed a group of soldiers had done it. Ollerton insisted there was no truth in that. Altercation or not, Ollerton’s group had been discovered and dismissed from selection. Only two returned for another go. Ollerton was one of them.

A 36-hour continuous professional interrogation presented the most brutal part of selection, where a single word can result in dismissal. ‘Emotional awareness’ is the trick to passing, according to Ollerton. Pretending to be the tough alpha male without weakness is only counterproductive.

“I admit to everyone that I have doubt,” he says – although a ‘just suck it up’ attitude is also useful. That’s the message his corporate leadership training business, Break-Point, propagates, as well as being the tenet of his self-development book of the same name.

Enduring short-term discomfort propels development. And according to Ollerton, people can learn to adopt this endurance by contradicting negative thoughts with positive ones.

After leaving the forces, Ollerton jumped between jobs, before finding his way to Thailand. There, he supported a charity combating child trafficking abuses, run by a former Australian commando.

The team spent time busting brothels and sweatshops, and intercepting children prepared for collection by Thai cartels. Such work, funded out of Ollerton’s own pocket, gave him something he had long desired: a purpose.

Since leaving the forces, Ollerton had been struggling to kick a bad alcohol and drug habit. Addiction led him down a path flanked by anxiety and self-destruction.

“I wanted to numb the stuff that was going on inside my head,” he says. “I grew my hair really long, and didn’t do anything apart from drink and party.”

But the suicidal thoughts shocked him into change after returning from Thailand. Aged 43, he was living off his mother’s borrowed credit card and staying in someone else’s house rent-free.

“I knew there was something more for me out there,” he says, “but I also knew that if I kept on drinking, my life was going absolutely nowhere. And the worst thing that would happen in that event was suicide.”

Ollerton began questioning the role of different aspects of his life and created a ‘purpose pyramid’ to evaluate them. Each corner of the pyramid signified a question:

Do I enjoy it? Does it add value or growth? Does it help others? Ollerton had to be able to answer ‘yes’ to at least two of those questions to continue the behaviour in question.

Drinking was ‘no’ times three.

Isolating himself for three months, one of the other methods Ollerton used to discover his purpose was ‘visualisation’. He described his goals in a diary and imagined achieving those dreams, all the while considering how they made him feel.

One of the more peculiar visions involved he and his best mate, Jason Fox (‘Foxy’), appearing on a stage together, using their experiences to help people improve their lives.

Three months later, he received a call. It was Foxy, wanting to know if Ollerton would co-present a new Channel 4 show, later called SAS: Who Dares Wins.

At first, Ollerton saw the show as a platform to build his company from. But after the first season, he realised its alignment with his purpose.

“It wasn’t focused on being a celebrity,” he says. “I still struggle with that word, but I understood how it was helping other people, which would fit into my ethos.”

Ollerton went on to write two self-development books, Break Point and Battle Ready, as well as two action-thriller novels, with another on the way to complete the trilogy.

Other former special forces operatives have also used fictional writing to share their experiences. Andy McNab and Chris Ryan are the first who come to mind. And Ollerton said that may be in part because storytelling provides a powerful canvas to communicate a message.

But his protagonist, Alex Abbott, is different. Unlike other typical ‘heroes’, his character makes mistakes.

“So many people think the special forces are these superhumans created on another planet,” he says. “That’s not the case. We bleed and breathe just like everyone else, and we have the same negativity, the same lack of motivation. It was really important for me to show that.”

While Ollerton, 50, confesses to his own faults, he has no hesitation chasing the most difficult challenges. In June, he’ll attempt a record-breaking crossing of the Channel in a gig boat – an oared wooden vessel sometimes used by treasure hunters to travel from the shore out to a ship run aground at sea.

To maintain a good routine, Ollerton stresses the importance of his mornings. On an ideal day he wakes up at 5am. His phone and emails remain off, and he’ll go straight from bed into a 20-25-minute guided meditation session.

On his best days, he’ll run in the morning – often 7k, though sometimes more. From the run it’s a dash to his desk where he bangs out an hour of work, keeping his phone switched off to protect productivity. He then heads to his office, where a gym on an upstairs floor awaits him for an afternoon strength session.

Intense exercise on weekends is avoided, but Ollerton often finds time to kayak or mountain bike as a form of active recovery. “As a husband and father, [exercise] helps me perform,” he says. “The older I get, the more important I feel it is.”

Nutrition holds just as high a value, too. In the forces, he only cared about fitness. But now a healthy lifestyle is a more important focus, and he’s tried every type of diet – keto, paleo, vegetarian and more – to find the right balance.

The best approach he’s discovered is ‘conscious eating’, which requires a raised awareness to the provenance of his food and a sensitivity to his body’s needs.

“A lot of people are throwing so much shit into their bodies, and then they wonder why they’re having mood slumps,” he says. “It’s a shocking state of affairs. You’ve only got to look around. People are not looking great.”

He’s founded his own supplement company, Battle Ready Fuel. When time is tight, a protein shake can step up as a meal alternative. He also loves a pre-workout and often uses it as ‘leverage’ to get himself into the gym – once it’s down his throat, there’s no way he can sit still at his desk.

“My life started to change positively when I began to do what I wanted, not what I thought was expected,” he says.

According to Ollerton, focusing on ‘feeling’, not ‘image’, is the sure-fire route to fulfilment.