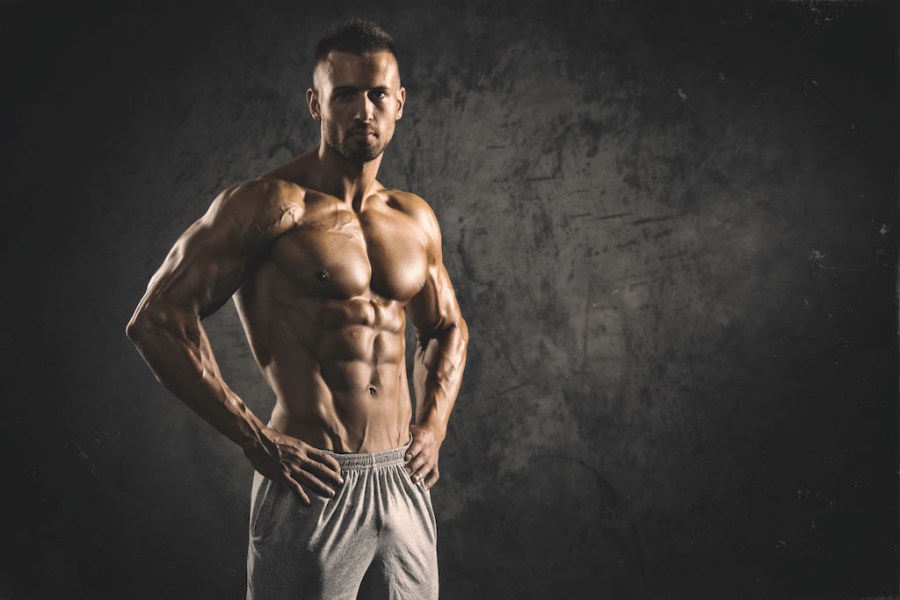 Rightly or wrongly, most men who work out regularly will have at least some desire for visible abs. The reality, however, is that hardly anyone does. Why? Not because they don’t train hard enough, but mostly because they don’t work smart enough.

There’s also one inconvenient truth: you will only start to see your abs when your body fat is low enough. Many people find they train their abs year-round and never get a six-pack, because it’s covered in a layer of belly fat.

If you’re going to put so much effort into training your abs, put the same level of effort into your eating, otherwise you’ll never get to see all your hard work in the gym pay off.

Carving out a six-pack requires time, devotion and consistency, but maintaining it for the long haul also requires some big lifestyle changes and a few sacrifices along the way. All of which begs the question: is it worth it?

Well first, a disclaimer: six-pack abs are not the secret to endless happiness. Single-digit body fat will not make all your wildest dreams come true. And even if visible abs were the Holy Grail, some people’s genetic makeup makes them difficult to achieve. In short, don’t pin all your hopes on a washboard midriff.

However… ask 100 men what part of their body they would most like to improve, and most will likely point to their stomachs. The six-pack remains a highly coveted physical attribute – even though, it must be said, visible abs have no functional benefit. But if you’re still after those abdominals, the days of endless sit-ups are long gone.

We spoke to five fitness models who know a thing or two about being camera-ready at any given moment. Here are their training, nutrition and lifestyle tips for sculpting and sustaining a solid set of abs. 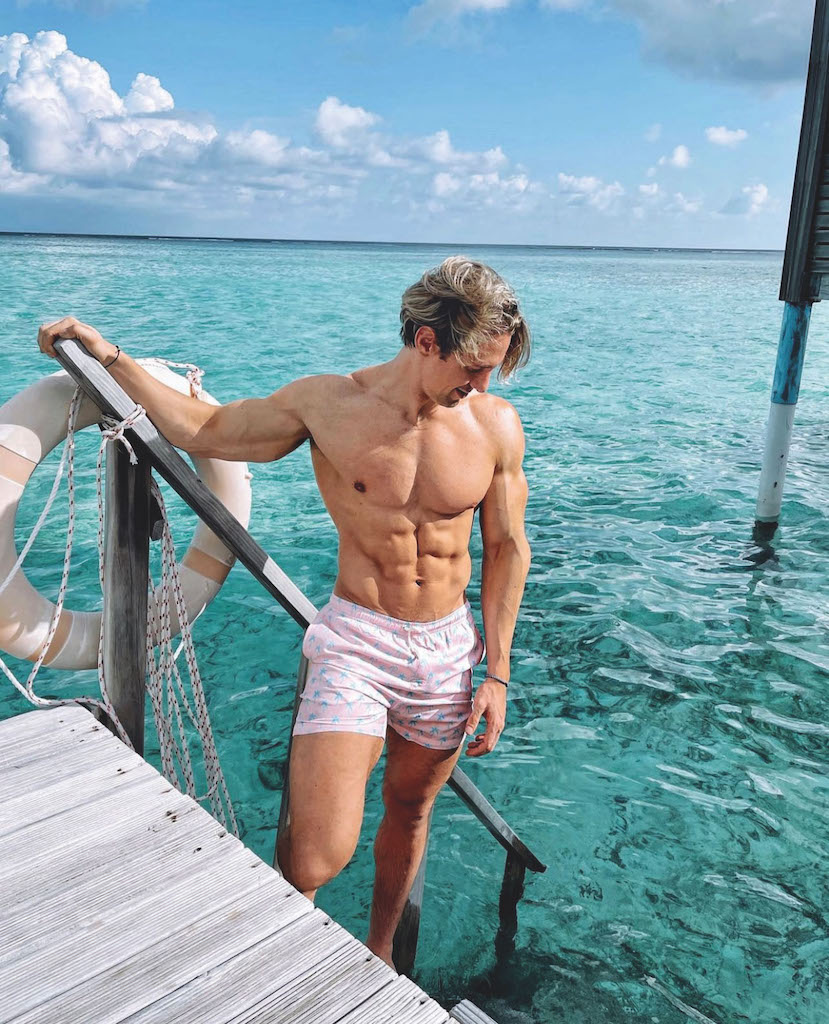 Stafford recommends switching up your training to focus less on crunches and more on big, compound exercises.

“These are going to increase your calorie burn, but also help you maintain lean muscle when you’re in a calorie deficit,” he says.

“Hit big lifts three to four times a week max and you’ll be keeping your engine revved up. Think squats, deadlifts and chest press, for 5-6 reps.”

“Protein doesn’t just keep you fuller for longer, stopping you from reaching for unhealthier foods, but it’s also the building block for bigger muscles,” says Stafford.

“As a general rule, aim for 1g of protein per kilo of bodyweight. Remember, though, Rome wasn’t built in a day and the same goes for your fat-loss goals.”

“The easiest fix, and the most underrated, is simply to drink more water,” says Stafford. “It improves everything from the inside out: it boosts energy, dulls cravings, helps you drop fat, and detox.

“Aim for about a third of a litre of water per 10kg of bodyweight and you’ll be there or thereabouts for optimal hydration.”

For a simple way to ensure you’re drinking enough, Stafford recommends getting a refillable two-litre bottle and drinking it all before midday; fill it up again, then finish the next before bed.” 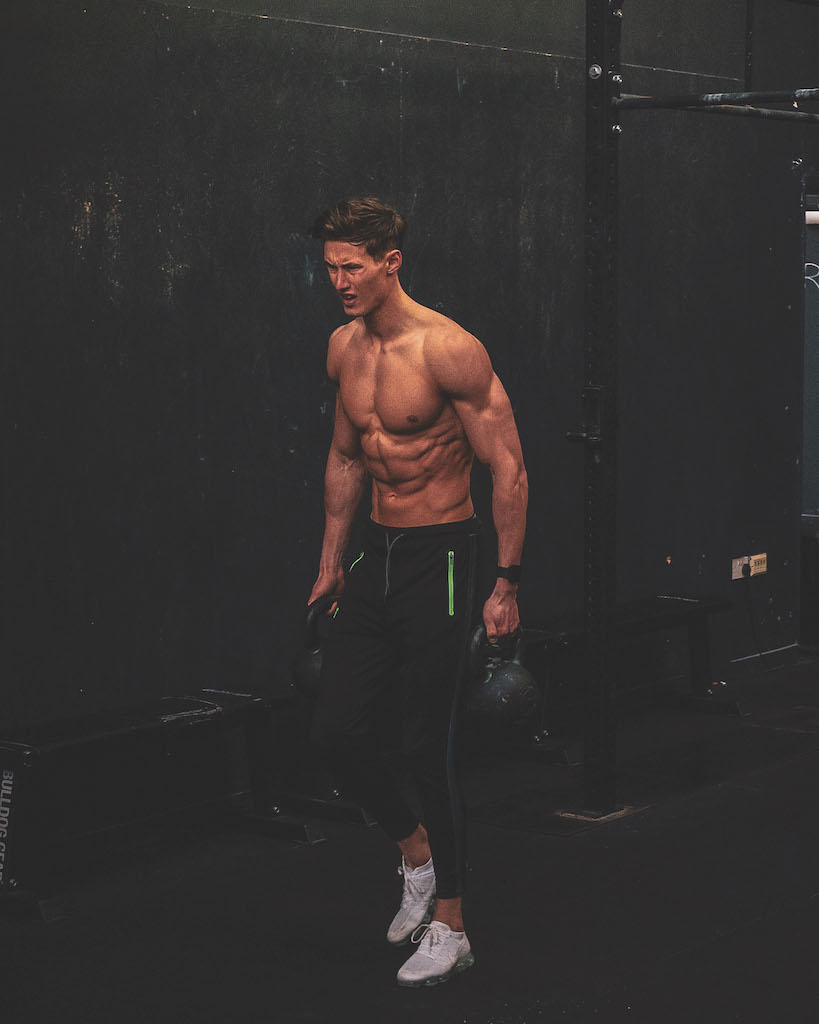 Based in London, 31-year-old Dan Hyman is a PT and founder of Eat.Look.Feel. He’s modelled for the likes of Calvin Klein, Versace and D&G, to name just a few.

“Plus, it helps provide a solid foundation for you to get stronger, fitter and more robust, ultimately making that six-pack easier to achieve and maintain.”

Hyman recommends planks, ab rollouts, cable rotations and the pallof press, all of which will target the TA directly.

Along with the three macronutrients – protein, fats and carbs – micronutrients are of optimum importance, says Hyman. These are the vitamins and minerals typically found in fruits and vegetables, which can help with mood, energy and hormone balance.

“Shoot for seven to ten portions of fruit and veg a day, and focus on including micros in every meal,” he says.

“A morning smoothie is also a really effective way to get lots of micros in conveniently,” Hyman adds. “If it’s something you’re neglecting often, a green drink can be a good option, but these should be used more as a top-up rather than something you become reliant on.”

“The same thing day in, day out, can be boring,” says Hyman. He recommends including a ‘mixed modal’ approach. “Walk, run, bike, swim and yoga around your resistance training,” he adds.

“Creating a well-balanced exercise programme, and dipping into several different modals, keeps things exciting and enjoyable over the longer term.” 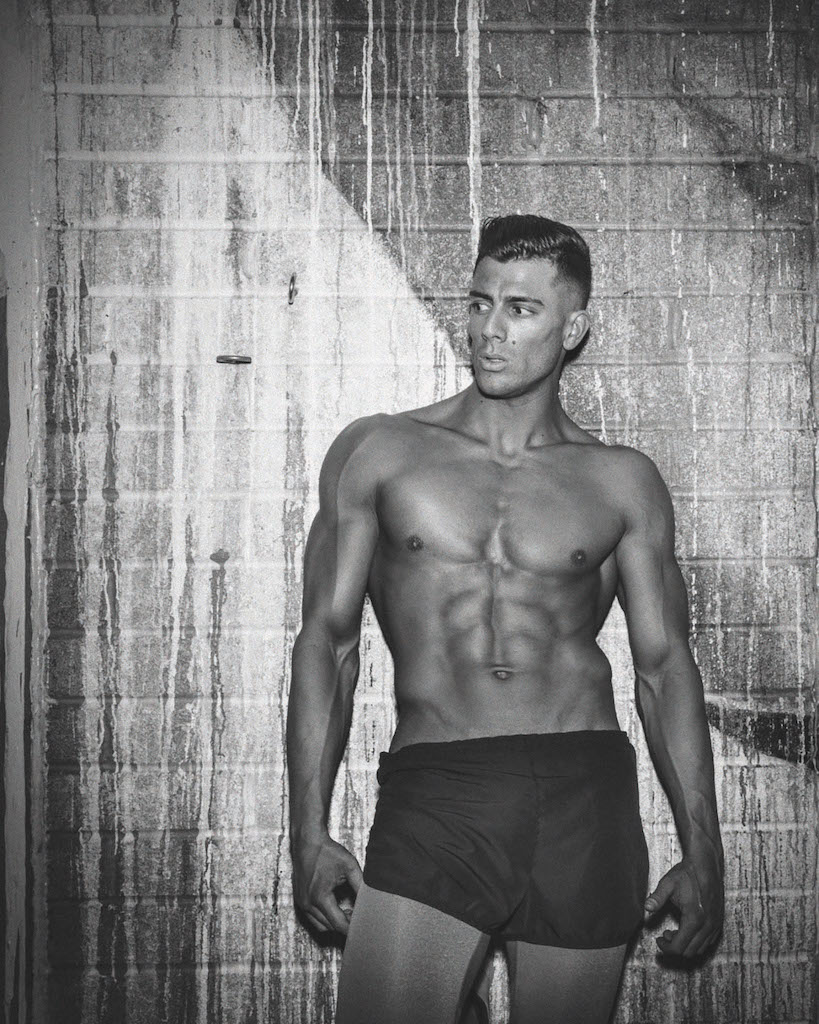 “If you want to really solicit change, aim for high reps, high set counts and minimal rest periods,” says Ashayer. He adds that with ab muscles, it’s about repetition and volume:

“The ab muscles are a smaller muscle group, but you can focus your energy in flooding that muscle with volume. Every time I train, I will incorporate abs work.”

“It’s not as simple as calories in and calories out. I don’t calorie count; we’re not after weight loss, we’re after a body fat goal,” admits Ashayer, who says his diet is primarily high protein and fat with lower carbs.

However, he does still enjoy carbs.

“I load them in the morning and then taper them through the day. I’ll train cardio in the morning on an empty stomach. Then in the evening I tend to train in muscle isolation, like a bodybuilder would, so my carbs don’t need to be incredibly high in the evening – unlike someone who is doing explosive anaerobic exercise.

“Eat good-quality food every two to three hours and avoid anything that comes in a packet or a tin, or generally anything that’s too heavily processed.”

Ashayer doesn’t believe in restricting when he heads out to eat.

“Enjoy whatever restaurant you’re at, whatever hotel you’re at, otherwise don’t do it. Naturally my body has adapted. If I go out and eat loads on a Saturday night, I’m not hungry the next day, so I’ll do a fasted session.” 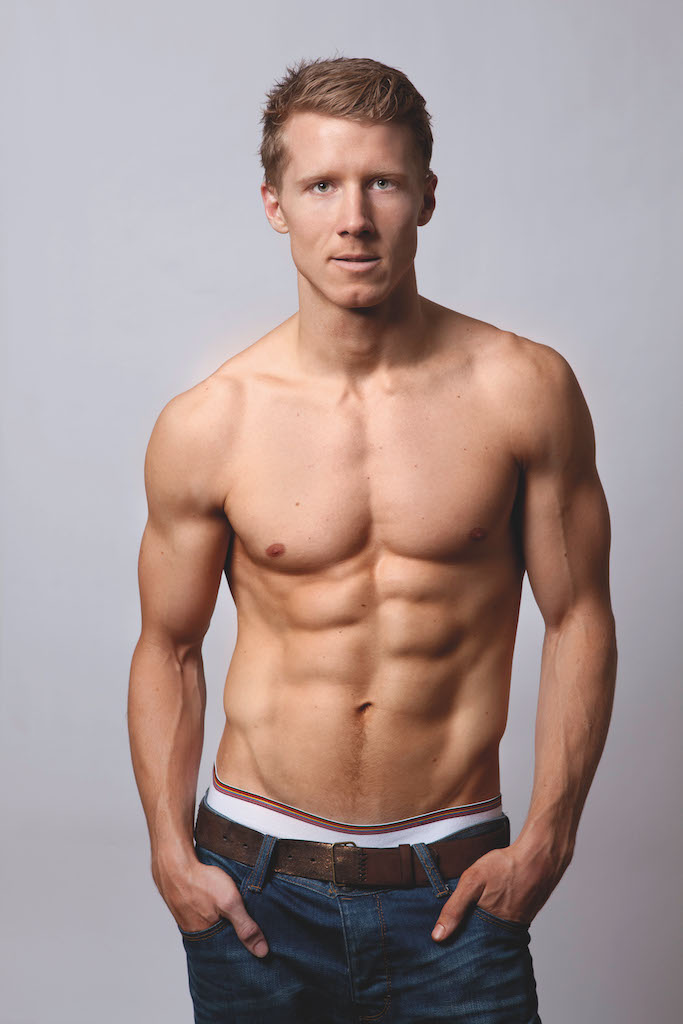 39-year-old Max Wilcocks is an endurance athlete and sports photographer.

Ab work and lifting weights can work wonders for the abs, but arguably the best way to engage your core is through functional movement.

“I run eight to 12 times a week, climb once and swim twice,” says Wilcocks. “To maintain a lot of positions when we climb, we are continuously tensing the abs and core. Isometric planks and hanging knee raises help you maintain that ab strength.”

“You can maintain a six-pack with a healthy lifestyle and eating intuitively; tracking your macros isn’t the only answer,” says Wilcocks.

“Carbohydrates aren’t the enemy, but it is true that combining a carbohydrate-dense diet with inactivity won’t allow you to maintain low body fat. Fuel your fitness lifestyle: that might mean eating more on days where you are training harder and then cutting back on days with less exercise.”

“Racking up the hours in bed, asleep, is key to getting and maintaining a six-pack,” says Wilcocks. “Your body’s response to insulin can be reduced if you have had a lack of sleep. So if you’re out partying and not getting a good night’s sleep, you’re hitting yourself with a double whammy of excess alcohol and lack of rest.

“If your body does not respond to insulin production, you will have less glucose in your muscles and liver, which means you will feel more lethargic and won’t be able to train as well.” 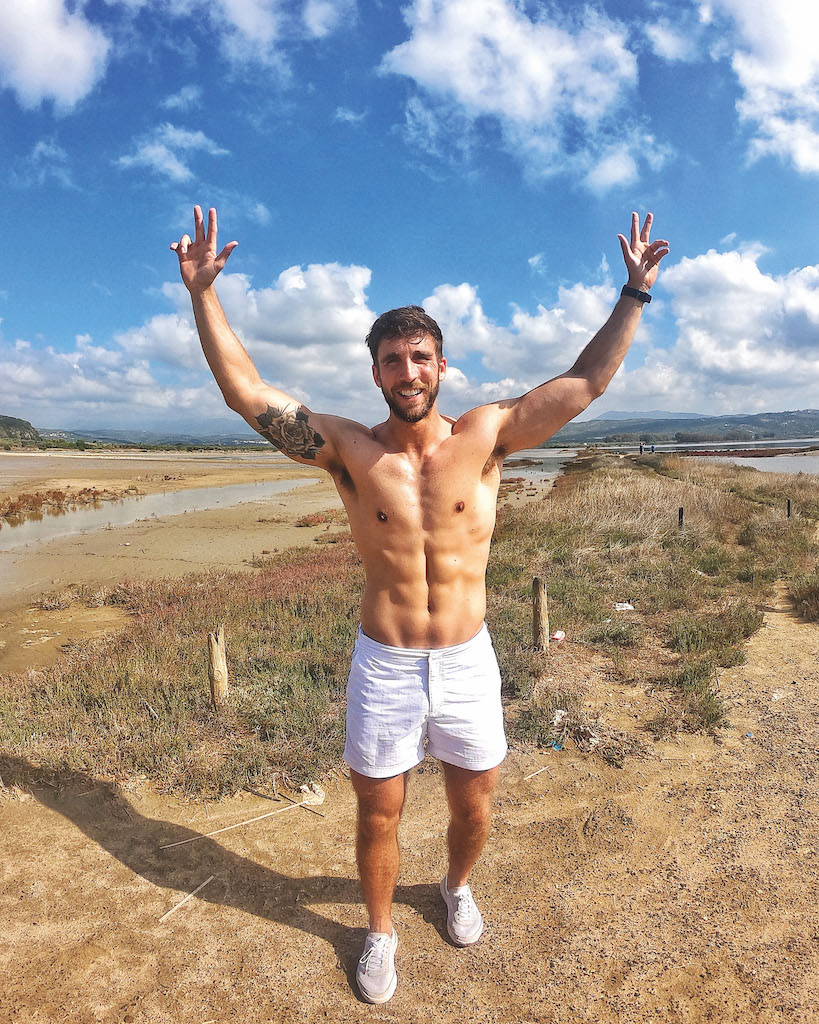 London-based James Stirling has modelled for the likes of Adidas and Next. He’s also the founder of PWER, an online workout programme for body and mind.

“We are all born with abs, but if your body fat is too high, they’re just not going to be seen,” says Stirling.

“Secondly, how trained your abs are will determine how they look. Just like with your biceps, you need to stimulate and overload your abdominal muscles to make them grow.”

While you don’t need to live off chicken and rice for the rest of your life, you need to drop your body fat through a sustainable calorie deficit. The stomach can be a particularly stubborn place to lose fat and there is an element of patience involved.

“Vodka lime sodas might not hold the same appeal as ice-cold pints, but it will help you out on the calorie front if fat loss is your goal,” says Stirling.

“Cooking oils are higher in calories, so opting for a low-calorie spray can also be an easy win. Equally, rather than a calorie-dense frappuccino, keep it simple with a black coffee to strip back the sugars.”

Non-exercise activity thermogenesis (NEAT) is an easy way to keep up the calorie burn, without even realising it. “It doesn’t need to be complex,” says Stirling.

“Take the stairs instead of the lift, walk wherever you can, take regular breaks to move around, and try to incorporate more activities that involve movement, such as walks or bike rides with mates.”