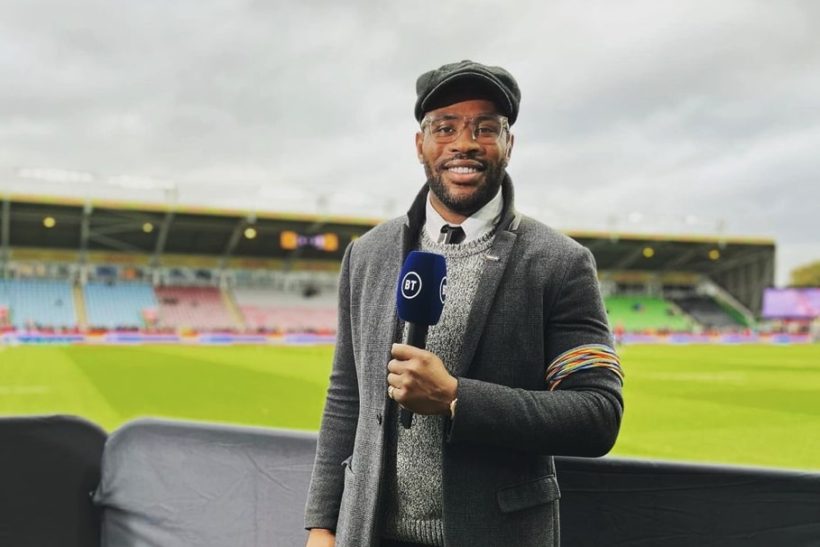 Ugo Monye is a rugby union commentator and pundit. He played 14 times for England, twice for the Lions, and 241 times for his club Harlequins (who he won the Premiership with in 2012).

Monye retired at the end of the 2015 season, and has since become a TV mainstay, starring in last year’s Strictly Come Dancing, and now captaining a team on legendary quiz show A Question of Sport.

Ahead of his appearance on Boots’ Taboo Talk podcast – covering the topic of pain in sport – MF asked Monye about his own experience of pain while playing, and the state of his fitness now he’s retired.

Rugby is a physical, aggressive sport – is pain just seen as part of the job?

“It’s a land of giants, isn’t it? In training you have to be physically robust. You have to put yourself through a bit of pain. And I almost don’t like using that word ‘pain’ because of some of the negative association with it.

“There’s some really good, positive pain, and that’s how you get growth. But then there’s the negative side of it: injuries and collisions, which rugby totally wraps up.”

You speak on the upcoming episode of Taboo Talk about chronic pain. Why do you think pain is a taboo topic, especially in the sporting world?

“I think often sports men and women have a warped relationship with pain because you’re told to get on and deal with things. On the rugby pitch, if you get a bang or a bruise, your instinct is to get back up and help the team.

“Unfortunately, through, that learned behaviour of just getting on with things, you probably transmit some of those behaviours into your day to day life. I’m six years retired. And I try and just get on with things, but that in the long run actually leads to you being in a far worse position.”

How often did you play through serious pain?

“I tore the plantar plate off the bottom of my foot – that’s the ligament which attaches your toe to the ball of your foot. It’s as if you didn’t have a thumb on your hand.

“I did that fairly early on in the first half of a game (2010) and played on until halftime. I knew it was sore, but with adrenaline and this large crowd cheering us on, it wasn’t until halftime that I couldn’t stand up.

“I had a groin reconstruction, too. I tried to play on, and I wish I hadn’t because what was initially a groin irritation ended up being a full groin reconstruction. That was the most painful surgery and recovery I’ve ever had in my life. It was horrific.”

It’s rare to find a retired rugby player without long-standing injuries from their playing days. Do you think that’s something that needs to be addressed, or is that just the price paid for being a professional sportsman?

“The sport’s never been safer in terms of the data which we have on players. There’s probably more people behind the team than there are on the team. But saying all of that, the sport has got tougher.

“The ball-in-play time is up, so you’re going to get more collisions. And when players do get injured, the people and the infrastructure around them has never ever been better.

“Can we make the game safer? Yes. We brought in laws to make it safer, especially on the topic of head collisions and concussion. But the game will always be the game. And it’s important that the game doesn’t ever get afraid of its own shadow. It’s a contact sport, there are just going to be unfortunate times where injuries will occur.”

Now you’re retired, how does your fitness routine differ from when you were playing?

“My whole outlook on health and fitness has massively changed. I don’t need to have a personal best to hold a microphone. My whole focus is now just on being healthy, which is a word which is so underused. When we talk about health and fitness, people talk about being beach-body ready. What about just having a healthy lifestyle?

“I don’t have to tackle big men anymore. And thank God, I’ve done it for long enough!”

And what new sports have you pursued since leaving professional rugby?

“It started with CrossFit, then I got into cycling a lot because it’s low impact and during the pandemic it felt like all you could do.

“I did loads of pilates and absolutely loved it. I don’t really lift weights anymore. I do a little bit, but haven’t for a long while. But beyond that, I’ve actually got into a bit of swimming. And any of the lads that read this will wet themselves when they hear that. I avoided that so much in my playing days, now I quite enjoy it. But the cycling’s probably been my biggest exercise tool more than anything.”

When you did retire, how did you find adjusting from having your health and fitness meticulously mapped out for you, to going it alone?

“I was lost if I’m being perfectly honest. When everything is scripted for you, from a nutritional sense to what you’re doing in the gym, I did struggle. And it was tough going to a gym and there’s not 20 other lads all pushing you. It was certainly a different change of gear.”

How do you programme your training now?

“Starting the day knowing that you’ve completed something is a really good feeling. So even if it’s not as much as what I anticipated, doing something is better than nothing. When I played, I’d start with a massage, pilates, some core work – that might be an hour. I don’t have an hour first thing in the morning just to prep my body for exercise, so I’ve had to do less of that. If you’ve got 20 minutes in the morning, great.

“Anyone who’s reading this, it’s easy to find excuses not to do things. But even if you’ve got a small window just to do a little bit of something, finding that little bit of time to do something for yourself is so much better than doing nothing at all.”